Kiah Zabel is an “Out…Proud…Lesbian,” or at least her Facebook profile hinted at it. Who knew that would involve her in a he-said / she-said / they-say with the Office of Campus Life?

rochester college may or may not feel weird about gay people

Rochester College “exists to engage students in a vigorous educational program that combines liberal arts and professional studies within a Christian community that will promote a life of study and service.” That might explain why the private Christian college in Michigan even goes so far as to declare that sexual relationships were “designed by God” and that sex should only happen between a man and wife – in the student handbook. But does it give them the right to actually control the lives of their students? Kiah Zabel says no.

Zabel recently came out on Facebook, and her school is proving to be taking the news kind of hard. When she put a Facebook photo up with the title “Out…Proud…Lesbian,” the college’s Dean of Students, Brian Cole, reached out to Zabel in the form of a letter meant to kick her out of her on-campus housing:

“I appreciate your move towards honesty and being the real you, but I’m going to have to insist that you change your Facebook banner picture,” Brian Cole is quoted as having written in the letter. “‘Out…Proud…Lesbian’ is not really consistent with the heritage of Rochester College and has proven to already be disruptive among fellow students who are really bothered by it.”

Cole also reportedly went on to note that if Zabel refused to remove the image, she could be kicked out of on-campus housing. “I have to hide [my sexual orientation] and I can’t talk about it or anything, and I have to conform to everything the school says,” Zabel explained to ABC 57. “I just told [the Dean of Students] it wasn’t fair and I told him it was discrimination.” 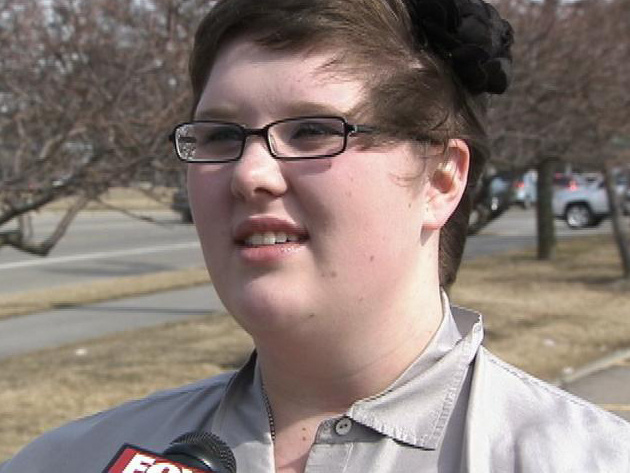 Rochester College has since moved to cover their own behinds in the wake of a situation that’s now drawing negative attention to the school. The President, Rubel Shelly, says any information reporting that the school said any of the abovementioned things is untrue. According to Shelly, dismissal from on-campus housing was never on the table.

“We do not bully or coerce,” Shelly said in a recent statement. “To the contrary, we are a community that values all its members and affirms the Golden Rule of treating others as we would wish to be treated.” Shelly also added that “the college affirms the right of all its students to make educational, values, and lifestyle identifications consistent with their personal life goals. At the same time, the college affirms its right as an educational institution to maintain its standards and values with consistency over time.”

But with headlines like “Rochester College Wants Me to Hide Being Gay,” the administration may want to think about what “standards and values” are being associated with it as an education institution — and they should probably do more than deny, deny, deny to fix the problem. And their assertion that “[the] essential values of the college are well-known and widely published.. students who find themselves uncomfortable with these standards always have options at other schools in the area” doesn’t do much to convince anyone that they’re supportive of Zabel, or other queer students. The fact is that regardless of the school’s intimations that if a student is queer, they should find another school rather than looking for acceptance at Rochester, there’s nothing inherently incompatible with being gay and a Christian community, or “a life of study and service.”

And so Zabel is standing her ground. And despite the “conflicting” reports of what happened, the contradictory denials, and the unavailability of school officials for comment, the real question is this:

“Christians are supposed to love others [as] they love themselves,” said Zabel. “Why am I being punished for being who I am?”