These past few months, “pussy” has been on the tips of news-making tongues round the world. Regardless of what people are saying about Pussy Riot, the fact of the matter is that “pussy” is appearing with high frequency in publications famous for their censorship, like the The New York Times. Pussy is essentially everywhere you look. As a result, this week, writers on Slate and Jezebel have been pondering pussy’s comeback, discussing whether the word can, should and will be reclaimed.

But looking into the etymology of the word reveals that it’s not just a simple matter of reclaiming. As Lindsay Zoladz points out on Slate, the root of pussy as an insult to men actually comes from pusillanimous, the Latin word for “having little courage.” So we’re dealing with an actual definition rather than a connotation. And meanwhile pussy as a synonym for vulva has a completely different root — though the actual origin is up for debate, it has similarities with the Old Saxon word for vulva, pūse, as well as several other words in various Germanic languages that mean “pocket” or “bag.” It’s doubtful that when people call one another pussies that they are acknowledging this difference in etymology. It’s not like people say, “You are a pussy, and I don’t mean a vulva.” It seems much more realistic that when people use the word as an insult, they intend it to mean “having little courage” because it’s a word that also means vulva. So that’s a problem. Pussy needs to be separated, untangled, from pussilanimous, before we can reclaim it. 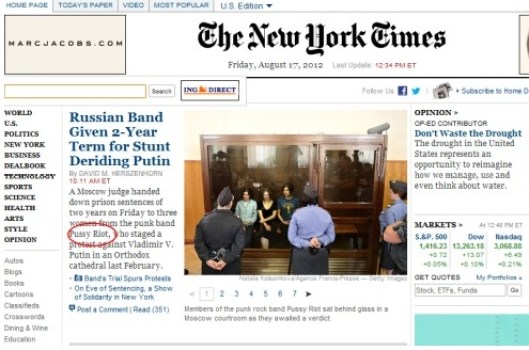 via The New York Observer

In addition to these two, separate meanings that have come to be problematically understood as a singular definition, pussy also implies a fair amount of raunchiness that differentiates it from more clinical, anatomical terms. And to that end, Madeleine Davies writes on Jezebel that among pussy’s problems is its “porny” connotation. So if patriarchy has re-appropriated pussy to insult masculinity and also added some verbal raunchiness that distances it from clinical terms, can women untangle it? Should we?

And maybe that’s why the word pussy is such a polarizing issue among lesbians. I can totally see how it can feel uncomfortable to use a word that all too often is coming out of some dude’s mouth to prove he is manlier than some other dude, or used to reduce women to their sexual capacities (as in, “getting some pussy”). But I feel very strongly that men don’t own words, and they especially don’t own words that describe your vag.

If pussy is fated to be untangled from its negative roots, it seems fitting to me that lesbians and feminist punk rock rebels should be first in line to do so. I personally have a fondness for it: in a private space without men and without an insulting definition, pussy becomes a liberated thing on its own terms. Because even while it has the ability to shed its “weak” implications, pussy doesn’t lose its naughtiness, that aforementioned “porny” quality. Since it doesn’t lend itself to a conversation about biology, it reserves itself for sex. The word pussy can have a nasty porny raunchiness that is decided upon by the very pussy that implies all those things. 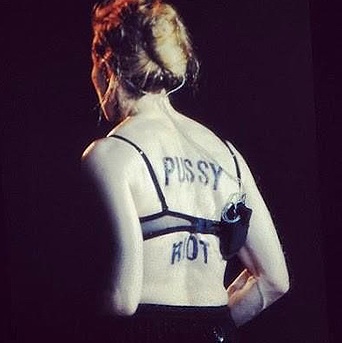 Now that everyone from your grandma to stodgy old newscasters are saying “pussy” like it’s no big deal, it’s starting to feel like that special dirty je ne sais quoi of the word is being replaced with a matter-of-fact, neutral, implications-free two-syllable bore. Is this part of the process of “reclaiming?” Does pussy need to become a blank slate in order to be rewritten with a meaning of strength rather than weakness?

I’m not so sure that’s the journey I want to see pussy take. Seeing one of my favorite sexy-time words on the front page of newspapers that my parents read feels almost intrusive with its casual intimacy. We live in a world created by language, where words have the power to shape reality: if pussy becomes a household name, I will deeply miss its naughtiness.

I wonder if Pussy Riot had a different name, would it would have caught the whole world’s attention? Part of what makes the group’s activism so successful is their ability to create shock value, and using “pussy” as part of their name is an integral part of that. Sure, they are reclaiming it, but they are also relying on the fact that for the rest of the world, pussy has yet to actually be reclaimed. That’s what makes it a radical band name. If the world gets on the pussy train and stops using it as an insult, I worry that it will lose its shock value as well. If pussy eventually becomes a commonly used vaginal word, will the name Pussy Riot eventually sound more or less like Vulva Riot?

Although, looking at it written there, I don’t hate the name Vulva Riot. Maybe I should work on reclaiming “vulva,” if only for the sake of my own dirty talk.