by Sarah Hansen and Rachel

A new anti-homophobia ad has come out in Australia and it made me tear up a little bit.

Here’s a tissue. Let’s talk about it.

No To Homophobia is a new campaign in Australia to educate the LGBTQ community and their allies about discrimination and harassment and the laws in place to prevent it. The ads include workplace, school, and sport harassment examples, but also extend to “employment and employment-related areas, education, where goods and services are provided, land sales and transfers, accommodation, clubs, sport and local government.”

The campaign focuses on harassment in Victoria, but No To Homophobia:

sends the message to all Australians that homophobic, transphobic and biphobic harassment are never acceptable, and that those who experience unlawful harassment have official avenues to respond to it, including the Victorian Equal Opportunity and Human Rights Commission and the police, which can result in consequences for perpetrators. 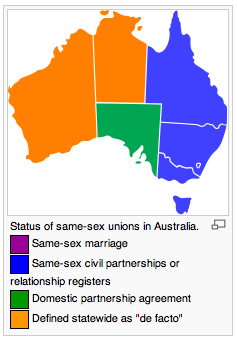 Victoria, and Melbourne in particular, is arguably the most gay-friendly area in Australia, though it remains surprising to see this type of ad on television. Australia is more open-minded with regard LGBTQ rights than America, with most states recognizing same-sex marriage at least at the de facto level.

I asked one of my friends in Australia if she had seen the ad in Queensland (one of the country’s more politically conservative states thanks to the recently elected LNP dickhead Campbell Newman — but that’s a whole other can of worms), and she said, “I saw the end of one the other day, but the whole lot makes much more sense. ADS LIKE THESE ARE IMPORTANT. People don’t know that they can shame the douchebags!! AND THEY SHOULD!” Well said, my dearest Delilah.

But these ads aren’t just suggesting we shame the people who harass us; they’re calling upon us to actually report that discrimination to the police as a crime, and implying that there will be consequences for the harasser if they do so. To American viewers, this idea may seem foreign; most Americans don’t report instances of homophobia, biphobia, or transphobia in part because they feel ashamed, but also because there would be no point. In many places in America, there’s no real legal recourse, because the law doesn’t recognize the discrimination that queer and trans people face. In a lot of ways, the law doesn’t recognize that queer and trans people exist. And the enforcers of the law haven’t necessarily proven to be allies either; Jene Newsome was discharged from the military (pre-DADT repeal) when local police officers outed her as a lesbian to her superiors, and when trans woman of color CeCe McDonald was assaulted by a group of people and defended herself, she was the only one from the scene arrested as her attackers went free.

Even aside from the code of law on a national level, many workplace discrimination policies don’t include sexual orientation or gender identity; far from being able to report it to the police, you can’t even report it to your boss. They don’t have an obligation to do anything about it, and sometimes, you can even be fired for it.  In 30 American states, it is still legal to fire someone for being LGBQ. In 39 states, you can be legally fired for being transgender. The Employment Non-Discrimination Act (ENDA), which has been introduced in every Congress since 1994 except the 109th. George W. Bush even threatened to veto the bill if it should pass Congress.

There’s a reason that when Americans do see PSAs that deal with homophobia, they tend to be about anti-gay bullying in schools. Although there still isn’t nearly the level of response or responsibility that there should be to protect kids, that’s one of the only arenas in which there’s any level of accountability at all. Even if it took the senseless deaths of schoolchildren to do it, there now seems to be a national consensus that schools (and parents, and communities) have a responsibility to make sure kids are safe, even from other kids. But in the workplace, on the street, in the doctor’s office, in public spaces, or even in higher education, most LGBTQ people in America don’t have an authority they can turn to and expect them to affirm their right to live with dignity. In Michigan, there was also a new public awareness campaign launched in the last year, but its point wasn’t to remind gay, bi and trans people that they have the right to be treated with respect. It was to remind them that they can be fired for being gay at any time, and so their only recourse is to stay in the closet at work.

I am doubtful that anti-homophobia PSAs will become nationwide in America any time soon. I am doubtful because ENDA hasn’t been passed for 18 years. I am doubtful because policing my genitalia and the genitalia of my romantic partners still seems to be a political issue. We’re still not in a place as a nation where we can admit that homophobia exists; the time when we can tell people that they can rely upon law enforcement to help them with it and are comfortable doing so in a national broadcast seems even farther off.  So, good on ya, Australia. We’re proud of you, and we hope that someday our rights start catching up.