The sun sets over New York City. A tinny, instrumental version of Akon’s “Lonely” plays as a hold tone. The Cousin-Itt-haired Old Dolio (Evan Rachel Wood) clutches tight to the pay-per-minute phone blaring her comfort tune. She feels a stirring of unnamable longing, unaware that on her flight back to Los Angeles, a charismatic stranger will wiggle her way into Old Dolio and her family’s luggage insurance fraud scheme, and Old Dolio will finally, after 26 years, confront her loneliness and long-dismissed desire for human connection.

Kajillionaire, writer/director/actor/punk archivist and person-of-the-future Miranda July’s third directorial feature is a careful, long-game-playing meditation on how we can learn to parent ourselves when our own families refuse to do the job. It’s at once a dreamy, golden-hour queer love story set amidst the friendly outlandishness of contemporary Los Angeles, and it’s also an unsettling, fluorescent portrait of familial betrayal in which one can’t help but feel every single wound that the magnificently weird, nearly Napoleon Dynamite-like Old Dolio tries so desperately to cauterize in the face of disappointing her despicably clueless, swindling, callous parents. So, light stuff that also punches you in the gut with its sincere fears of the lasting traumas of parenthood! Welcome back, Miranda July.

On to the plot: Old Dolio and her conspiracy-theory-wielding parents, Robert (Richard Jenkins) and Theresa (Debra Winger) eke out a living, if one could call it that, by employing just about every get-moderately-compensated-quick scheme in the book. This opens with Old Dolio’s exaggerated secret agent maneuvering to steal packages from the local post office in order to ask for a reward when presenting the more valuable packages to their rightful recipients in a Catholic schoolgirl outfit. That scheme is also the first time there is a glimpse into Old Dolio’s lack of healthy connection with even her parents. When she finds that the reward she receives is a non-refundable gift certificate for a 60-minute massage, she bargains for a twenty minute rubdown, but can only handle the barest hovering of the masseur’s (an empathetically uncomfortable but kind Da’Vine Joy Randolph) fingers over her neck and back. As the camera captures Old Dolio’s contorting, silently crying face through the bottom of the massage table, it’s clear that there’s more to her standoffishness and angularity than a manic pixie dream girl-type leaning into a neurotypical writer’s idea of AS.

When Robert fails to pay the rent on their tiny, pink soap-soaked room behind “The Bubble Factory” one too many times, Old Dolio goes into overdrive to earn money, and in the process comes up with an insurance fraud plan to use one of their many multiple-entry sweepstakes wins (a free roundtrip flight to New York) to lose their luggage and come up with the exact amount to pay three months worth of rent, plus seventy five dollars, for a total of $1,575. Of course, this is after Theresa completely dismisses the idea of using the sweepstakes win as a mother-daughter vacation; something Robert also disparages as inane and mindless. While their casual cruelty appears from the very beginning of the film, this display and Old Dolio’s responding effort to become even more useful to her parents concretizes one of the film’s central questions: what do we owe our family? 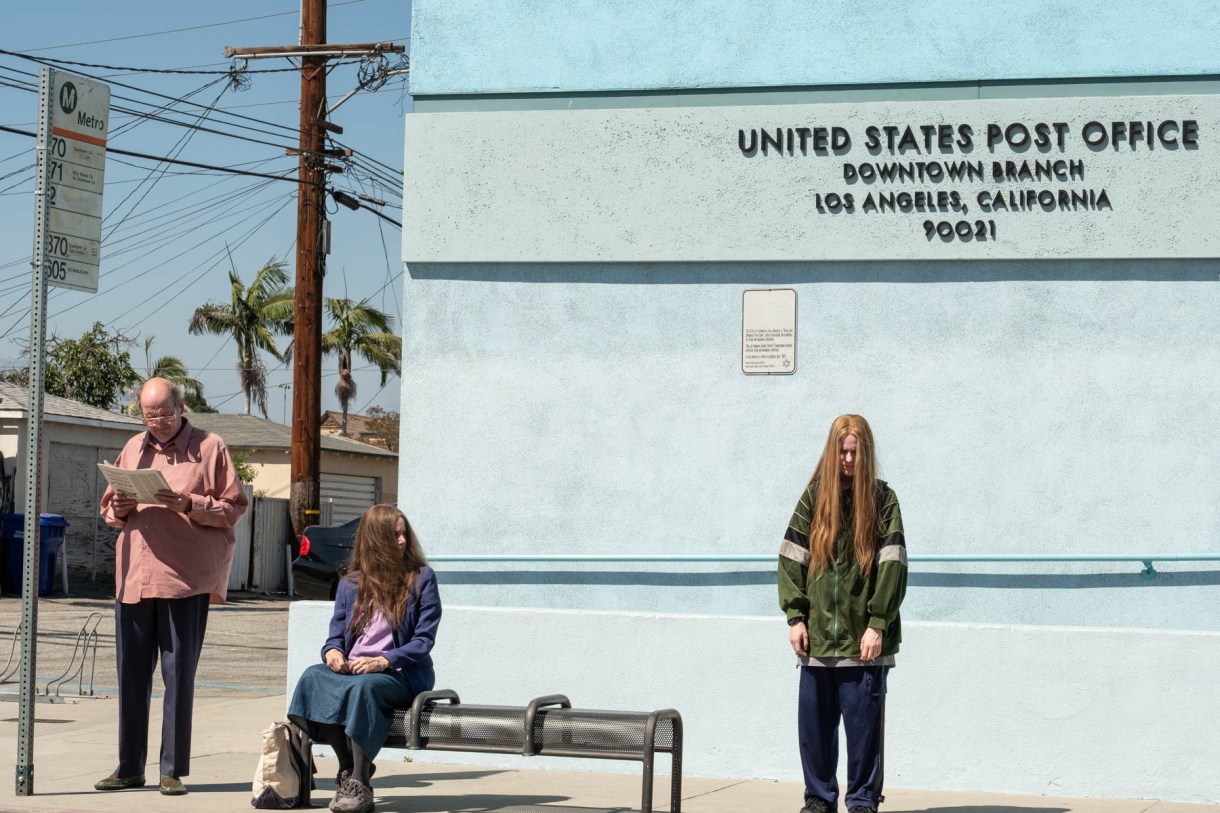 The scheme itself is pulled off without a hitch, but the out-of-thin-air appearance of Melanie (Gina Rodriguez), a young optometrist’s assistant bored with her static life and her own unbalanced mother, disrupts the family unit entirely, exacerbating Old Dolio’s insecurities and den protectiveness. When Robert and Theresa take a predatory shine to Melanie’s excited, far less careful scheming, what at first looks like jealousy on Old Dolio’s part morphs into an easily recognizable internalized panic whenever Melanie smiles too charmingly, makes prolonged eye contact, or wears a spaghetti strap. There’s not a gay panic, per se — rather a human panic. Old Dolio has never been able to connect with anyone, and here comes a bubbly, enthusiastic butterfly who not only sees Old Dolio, but gives everything to patience and comprehension of what this outsider in her own family wants.

As Melanie, Rodriguez is the kind, deceptively observant, chaotic good queer love interest in this genuinely sweet love story. If there were to be one serious caveat in seeing this film, aside from some meandering pacing that loses its thread every once in a while, it would be that you want to root for Gina Rodriguez’s character. I do not want to root for Gina Rodriguez. If you’ve been following social media in the last two years, you might know that Gina Rodriguez has wreaked havoc and caused some real harm with her vehemently stubborn public refusal to correct her anti-blackness, despite it being brought to her attention by many.

After a few casual theft adventures at the homes of the customers of Melanie’s optometrist, including one which proves that Robert and Theresa do indeed know how to be a real family to Old Dolio, they’ve simply chosen not to, the intrigue of the plot reaches its core. Old Dolio receives the check from her insurance, and instead of immediately handing it over, has an outburst in which she asks for care and tenderness from her parents; something Theresa alleges Old Dolio knows nothing about. Theresa then taunts Old Dolio for her superficiality in wanting endearments, kindness, and proper parenting. This comes right as Robert and Theresa attempt to sleep with Melanie in their newly-bought, improperly installed hot tub (honestly not the quirkiest thing to happen in Miranda July film), and the real con of the film takes shape.

What ensues is an emotional experience that hits incredibly hard, despite Kajillionaire’s foregrounding as a crime semi-satire. Melanie is attempting to break the cycle of abuse and dependence that Old Dolio has never been able to understand because of her isolation from the “normal” world, but she needs to do it in the form of a heist or a monumental transaction for Old Dolio not to see her rehab for what it is. Or maybe she does see it. At one point, Old Dolio remarks of her parents’ attempts to make up for every neglected birthday, and only giving 18 presents, “I’m 26.”

In any case, as enjoyable as all of July’s off-the-wall, seemingly incidental or purely aesthetic choices are (the soap cascading over and down the wall of the ‘apartment’ as Old Dolio tries to clean it being one of the most evocatively beautiful), the aching that Old Dolio isn’t able to escape until the close of the film is the reason to watch Kajillionaire. Evan Rachel Wood grows immeasurably over the course of ninety minutes, as she is denied everything, then has to force herself to accept love and let go of the people who have done the most to hurt her in ways previously insurmountable.

This may be labeled dramedy, or crime drama, or really just a complete sidestep of genre that tends to happen with human interest stories helmed by some of the industry’s most interesting people), but ultimately I couldn’t give a hoot about the more conventional details. This is a story about fully embracing queerness, and needing support in order to explore the “tender feelings” an abusive home life sought to quash. When Old Dolio uses the same movements of her package theft routine to show Melanie that she knows how to dance, something shakes free in her, and moved me close to tears. Old Dolio has the desire to love and be loved, she just hasn’t seen an avenue to wholeness that involves selflessness on the part of others, not herself.

Kajillionaire has the guts to turn a blacked out gas station bathroom into a spiraling journey toward existential fear and heartache, a “happy birthday” into the most conflicting phrase in a twenty six year old’s life, and the beep of a cash register into a healing note toward closure.

Kajillionaire was bought at Sundance Film Festival by Focus Features, with intended distribution in 2020.

Shayna Maci Warner (she/hers) is a writer, filmmaker, and pizza wrangler from Northern California, whose work has been featured by GLAAD, the Advocate, teenVogue, and Bi+ Women's Quarterly. You can find her in NYU's Cinema Studies graduate program, or yelling about the cis-hetero patriarchy on the podcast Charmed: A Spellcast.

Shayna has written 5 articles for us.