Previously on Supergirl, Winn came back from the future to stop his alter-Earth-ego from destroying his reputation, Brainy was convinced by his female counterpart that he had to work with Lex to save the world, and the Toyman that Team Super thought they stopped didn’t seem to be fully gone.

We open at the gaylien bar, where it’s karaoke night. It’s Winn’s last night out and they’re trying to enjoy their time together. He tells them about his call sign, Computer Lad, which is definitely not Cisco approved, and they tease him for it. William shows up and everyone gives her faces about it. He is pumped it’s karaoke night and they do an admittedly cute rendition of “Africa” by Toto. 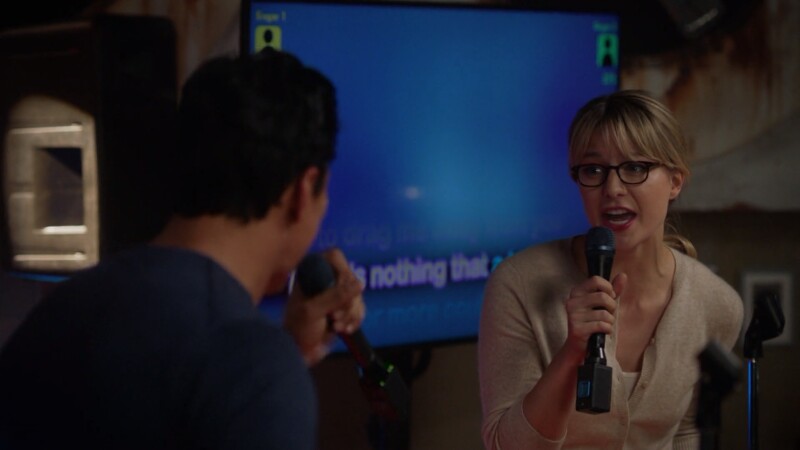 I do like seeing Kara happy and she did seem to be having a great time. (And it’s always funny watching Melissa be only medium good at singing when in reality she’s a powerhouse.)

While they sing, J’onn asks how she’s handling working for Lex, and she hates it but she’s sticking it out because she wants to keep an eye on him. She has spyware in the system to keep tabs on what he’s up to, and when J’onn tells her to be careful, she says that Brainy has her back. 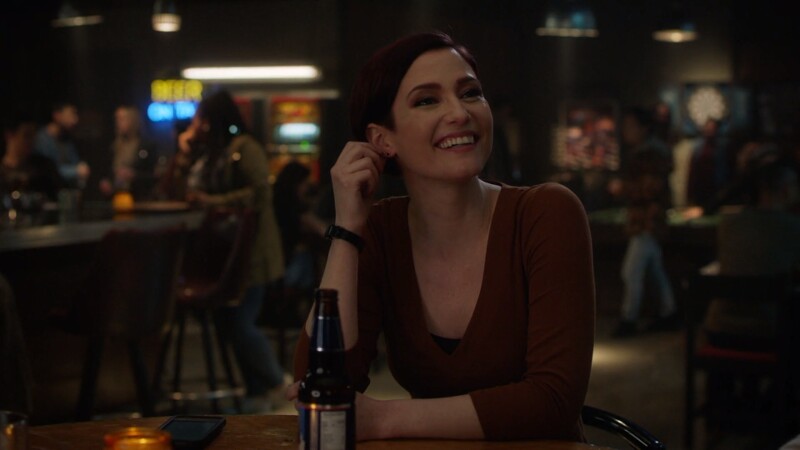 Confession: This isn’t actually from that moment it was just too cute to not include.

Unfortunately, we then cut to Brainy chit chatting with Lex, talking about Gemma Cooper and how Lex knows Alex is spying. Lex tells Brainy to keep Alex in line, and asks if there are any technical difficulties. Brainy is confused and says no, but as soon as he hangs up, some drones attack him.

Alex gets called in to help and Winn says he’s going to join for one last mission. Winn goes to get Kara, who is being asked on a date by William. But Winn, apparently very rusty with the whole secret identity thing, almost calls Kara “Supergirl” and makes up a very bad lie about Kara’s “Gran Gran” being sick and Alex needing her. So Kara excuses herself before she can give William an answer.

The SuperFriends show up and save Brainy from the attack of the drones, and as soon as they do, they hear a song coming through on their comms that Winn recognizes it as a song his father would play. 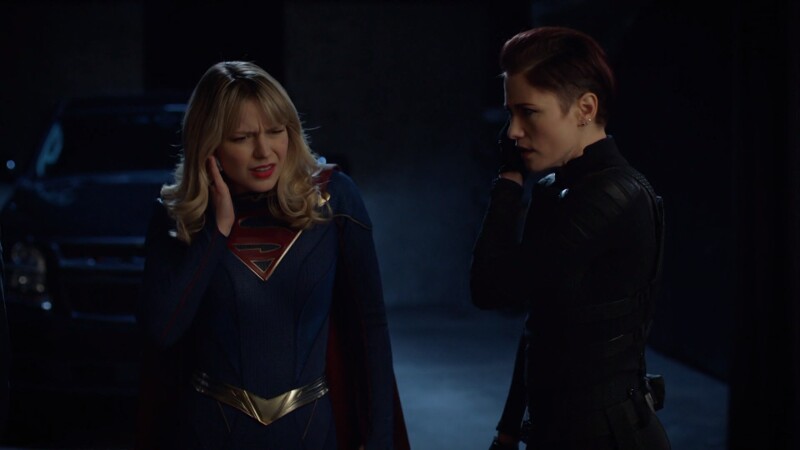 “When you comin’ home, son, I don’t know when, but we’ll get together then.”

Brainy explains that the Toyman uploaded himself digitally, so he’s basically like AI now, a hyper-consciousness in the mainframe. If he leaves the DEO network, he’ll have access to things like air traffic and other dangerous things a madman shouldn’t have access to. 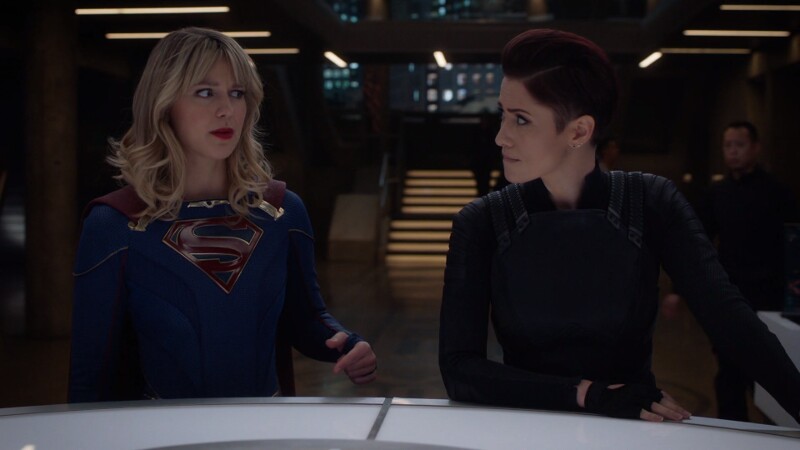 They realize that Toyman used Obsidian lendes to accomplish this and find the laptop he used. Winn says he can create a kill code, but before he can run off and do that, the DEO goes under lockdown as the Toyman appears on a screen and shows him a little of what he can do, manipulating their own lasers to attack them.

Brainy deactivates it but he knows it’s just a bandaid and won’t last long.

Alex tells everyone to start collecting tech so Supergirl can fly it to safety, because they have to keep the Toyman contained to the DEO’s network.

Then suddenly Alex hears a landline ring. She finds an old rotary phone under the war room table and it’s Lex, because of course it is. 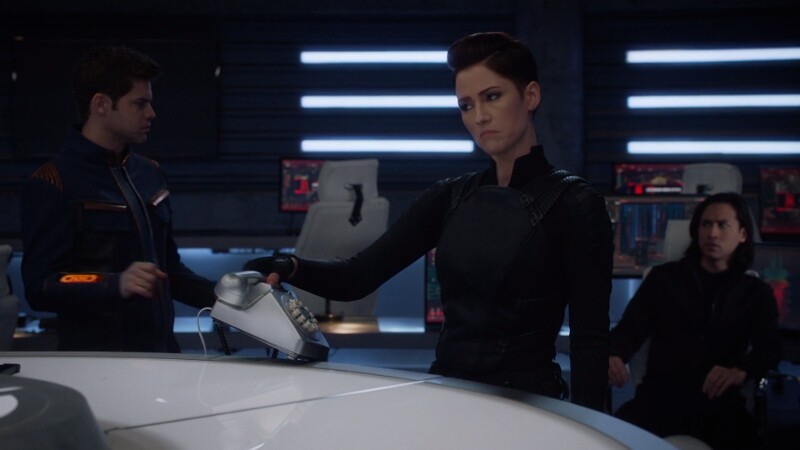 Funnily enough, this is also the face I make when my cell phone rings.

She tells him the plan, and Lex says that they have kryptonite defenses on all their stuff so Supergirl can’t fly everything out like Alex planned. Alex says they have anti-kryptonite technology for Kara, but Lex points out that they don’t have those suits in this universe.

Alex is annoyed because she doesn’t think it’s reasonable for Lex to ask her to have her crew do all of this work on their own, but he tells her she has no choice. Annoyed, she relents. 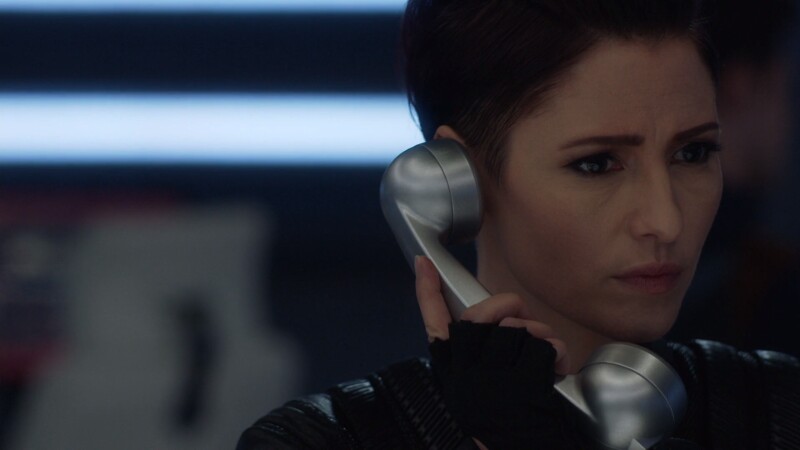 As soon as she hangs up and heads out, Brainy picks up the phone and calls Lex himself. He knows now that Lex knew this was coming, and Lex says he had his suspicions. He tells Brainy that he wants Toyman’s code to beat Leviathan because mutual immortality will even the playing field. I personally don’t want this at all because Lex should be dead as it is, I don’t need him around literally forever, please and thank you. Cryer is doing a great job, but I’m sick of Lex.

Over at CatCo, Andrea is in her office eating a lobster tail. Because why the hell not? 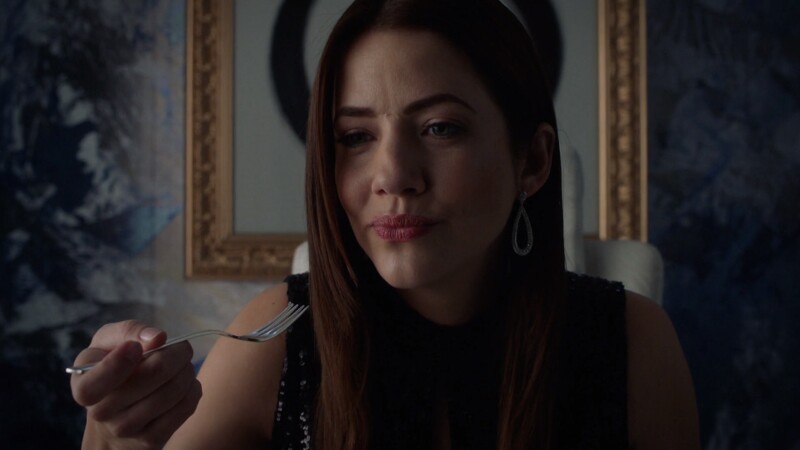 Now that we know she was in a simulation I have questions about her choice of dining locations.

But she has an allergic reaction and snaps awake and we learn that she had been in Obsidian lenses. She asks Kelly (hi Kelly!) why that happened, and Kelly explains that it has something to do with the biolink. They’ve been trying to get eating digitally to provide real nutrients but there are wacky side effects and she can’t quite figure it out. 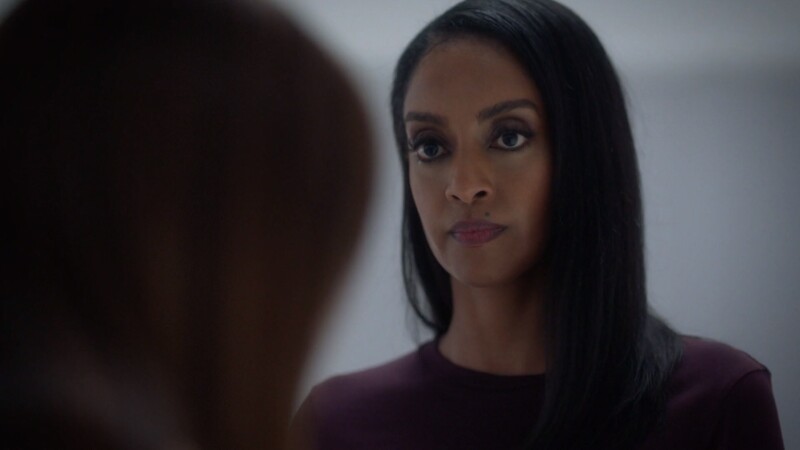 Kelly! Hi Kelly! Hey girl! How are you? I miss you. Hope they let you take walks for a little sunshine now and then.

Andrea gets a call that Lena is waiting for her in her office, leaving Kelly in her Lab of Isolation for the rest of the episode. Andrea is thrilled to see her old pal Lena, who is here to give the new Obsidian Platinum a test run. 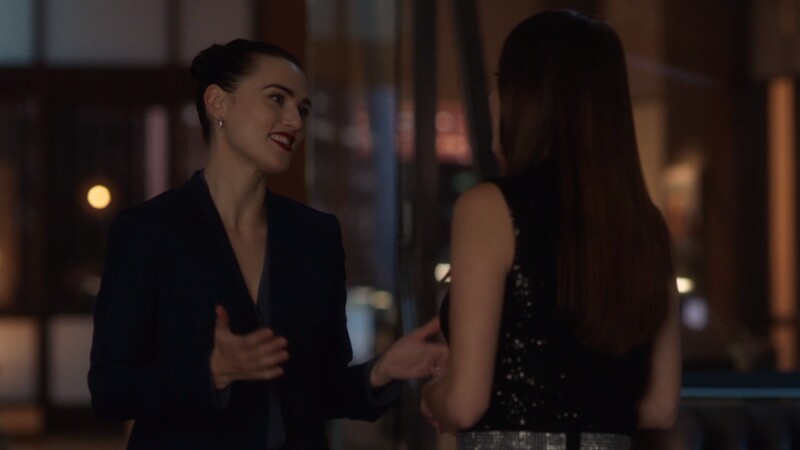 “Remember how I convinced you I forgave you for stealing the one thing my dead mother wanted me to find? Can I try your new technology?”

Andrea admits it’s not ready yet because of a few kinks they have to work out, and Lena offers some biolinking tech she’s developed. Andrea doesn’t want to risk their friendship by working together again, because apparently this universe’s Andrea is not as ambitious as the one we once knew.

Lena fakes a smile and excuses herself but you can tell she’s bummed this plan didn’t work out as she planned. 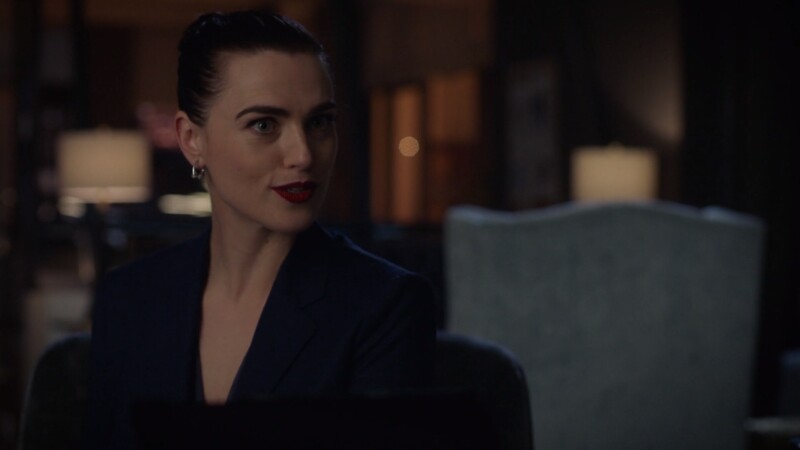 Lena in dark lipstick. That is all.

Back at the DEO, Winn and Supergirl head to the servers to find Toyman while Brainy and Alex stay upstairs to stop Toyman from getting up to anything shady. Alex says something about how we use technology to watch things but it’s watching us back, and I hate how this season all of a sudden everyone has a boomer-esque conspiracy theory about modern technology. When time and time again, it’s not the technology that’s the problem, it’s the people who misuse it.

BUT I’ll go on my diatribe about how the internet saved my life and continues to do so some other time. I have a feeling there will be plenty of opportunities this season.

Before going down to the servers, Winn pulls Brainy aside and asks about Lex, and Brainy says he doesn’t really know what Lex is up to but he’s handling it, and Winn trusts him because why wouldn’t he? It’s Brainy!

At LuthorCorp, Lex brings his sister coffee and asks her how her science is going. She says she needs a distribution method, and explains how she thought she could use Obsidian but Andrea turned her down. He offers to help her but she doesn’t want anyone murdered. He insists he has other skills, but Lena is rightly suspicious. 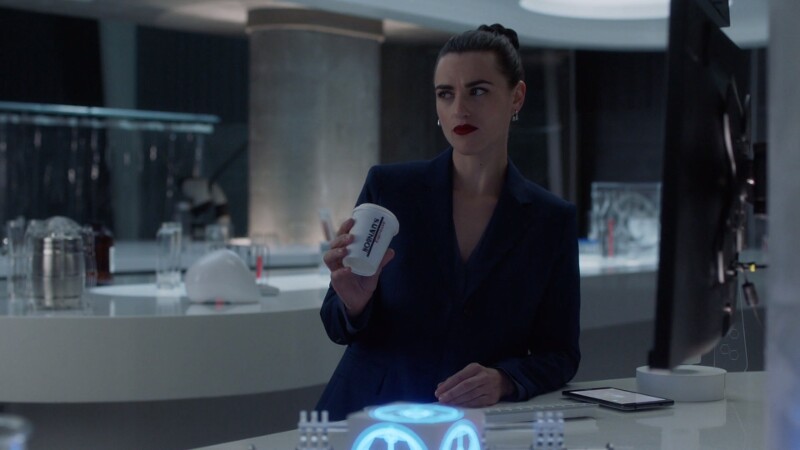 “I bet this isn’t even really oat milk.”

However, she’s desperate for Non Nocere to work, so she accepts his help.

Supergirl and Winn go down to the server rooms and Winn admits that he’s the one who came up with the code Toyman used to upload himself, because he had wanted to be part of a video game when he was younger. But he changes the subject to Kara and William, and Kara admits she’s hesitant…because of Lena. She says the word “friendship” but if she didn’t you wouldn’t know she wasn’t talking about an ex. Living a double life ruined her relationship with Lena, and she doesn’t want to risk going through that heartbreak again. To start another relationship on a lie. Winn says it’s just a date, but Kara is still unsure.

Alex’s team has been de-linking all the digital stuff, but the Toyman got into some robotic flying monkeys and has them go attack Winn and Kara. Winn’s dad comes onto a screen and reveals he was also uploaded, and he tries to help Winn, but Winn doesn’t trust him. So he goes a different way than his dad says while Supergirl thunderclaps the monkeys away.

Across town, Lex finds Gemma Cooper and introduces himself, pitching the same thing Lena did, but going over Andrea’s head about it. 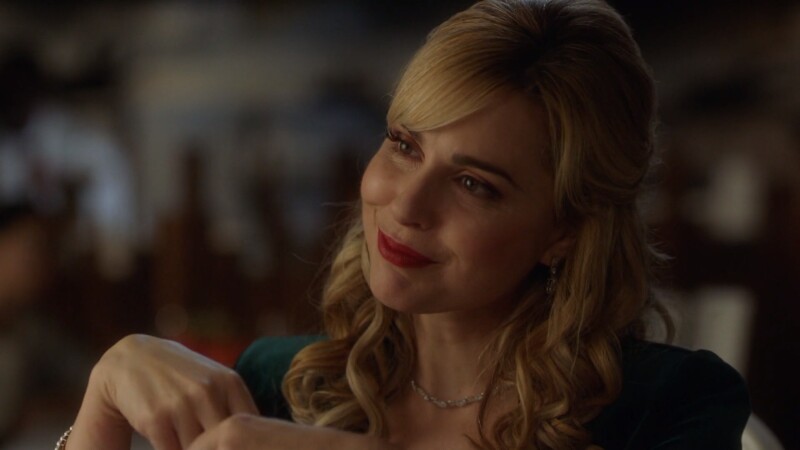 I don’t know what Leviathan’s deal is but if they’re going to take down Lex Luthor, sign me up.

He also pitches a longer-term partnership between Obsidian and LutherCorp, and she seems intrigued by this proposal.

Back at the DEO, before Alex de-links her tablet, she checks the activity on her spyware and realizes that Brainy deactivated it. 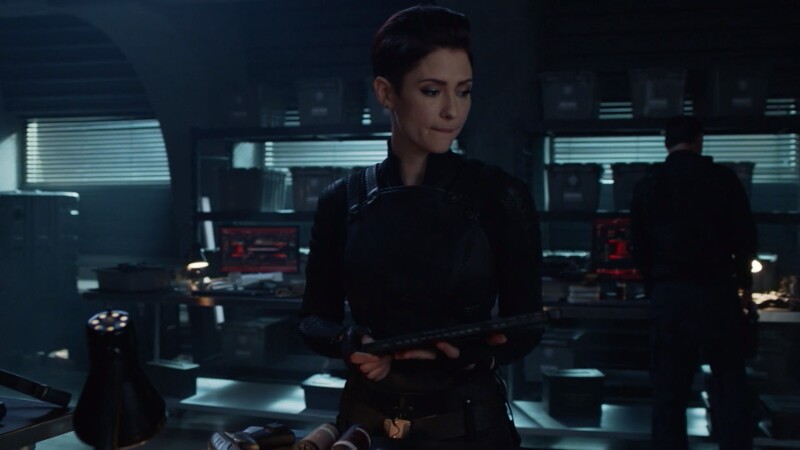 Me trying to remember which version of my password I used for any given login.

She goes to confront Brainy about it, and he insists that he did it for her own good, that Lex would have definitely realized it and that it would have been bad for everyone. She’s pissed and says that he’s been acting shady ever since all the other Brainys left and she doesn’t think it has anything to do with his personality inhibitors being removed. He says that technology can always be used against you, and promises her he’s on her side. And while I believe he believes that, I’m not so sure that’s true.