We’ve had good reason to be cautiously optimistic about the legalizing of same-sex marriage in Maryland; it successfully passed through the Senate, and had moved past the House Judiciary Committee. Republican representatives were visibly nervous about it, and while no one felt comfortable calling the game, it looked like the bill had more than a fair shot.

Until today, when after a debate on the House floor the bill was sent back to committee. What happened? Well, NOM, among other things. The vote had been tentatively in the Democrat’s favor, but it was always a close call; now, it would appear that NOM and nameless “church groups” managed to scare enough of the more timid delegates into retracting their support. So, it hasn’t been “killed” exactly, but since it seemed sure that it would be if it went to a vote, Maryland Democrats have taken it off the table for this year’s legislative session. 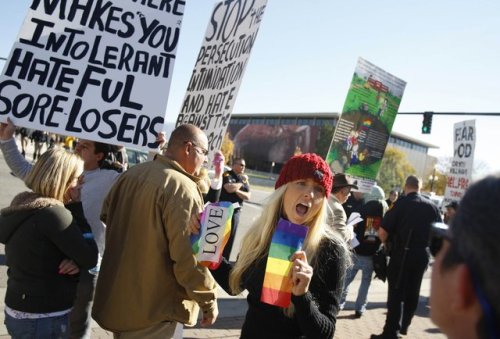 NOM has been fairly quiet and contained so far this year; one would not have been out of line to hope that the apparently very underwhelming response to their “Summer of Marriage” tour and Obama’s recent actions on DOMA and DADT might have dampened their enthusiasm for trying to ruin the lives of complete strangers.  It would seem that this is not the case. So, what we learn is that at least in some cases, waving around the idea of losing conservative and moderate votes for supporting gay rights legislation is an effective strategy. But that isn’t everyone.

It’s tragic that a few individuals, who weren’t willing to put the needs of others before their own hopes of career advancement, could deprive a state’s queer community of its basic rights. But on the whole, there are more politicians in Maryland who support this than who oppose it: it passed the Senate and has the support of the Governor, who was more than ready to sign it into law if it had passed in the House. And the fact that the House Democrats rescued it from being voted means – hopefully – that it’s because they’re optimistic about its passing in the future. They’re saving it for a time when it can succeed, because they believe that time is coming. So this isn’t good news, by any stretch of the imagination. But it’s also not over by any stretch of the imagination. Here’s to sticking this one out.