Carl Kruger is a Democratic senator who voted against marriage equality in 2009, and who is now accused of a widespread public corruption scheme, and also having a secret gay lover. Specifically, he is accused of taking hundreds of thousands of dollars in bribes, and laundering it through the man that he is alleged to have lived with for years, Michael Turano, as well as using the money to buy everything from Bentleys to household items for Turano and his family. (Read the entire complaint here.) It’s a bizarre piece of news: it combines the politically pertinent with the salacious in a mostly unprecedented way. Even the ‘reputable’ news organizations that would normally report only on the money laundering scheme and leave the rest to speculation have to talk about it; the relationship between Turano and Kruger has been well documented by the investigative team (although its sexual nature hasn’t and maybe cannot be proven) and confirming it will in fact be key to Kruger’s conviction. As Capital explains: 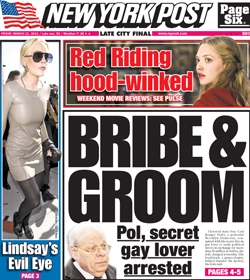 It was to accounts held by Turano that the money was directed, and in those accounts the money stayed, except to be spent on Bentleys and the like. (There’s even a $15,000 light fixture Turano wanted to buy, according to the complaint, but Kruger put the kibosh on it.) Ironically, the state senator who opposed gay marriage is in a position where prosecutors must show that Turano materially benefitting from help Kruger gave to various hospital and healthcare organizations amounts to Kruger benefitting from them directly. And so, the “intimacy” part of the case is crucial.

If light-bulbs and travel snacks—the sorts of things the complaint identifies as purchases of Kruger’s to benefit the Turano family—are not your idea of love-gifts, then consider that prosecutors only need to show that simply by being close to the Turanos, Kruger benefited from and could even direct the spending of money that came into the household.

It’s a weird kind of milestone: where only fifty years ago, or possibly five or one or zero years ago, the accusation of being gay was like a conviction in and of itself. But now it’s just one jigsaw piece of a larger puzzle, a cog in the machine of a man’s life that is being laid bare for the American public. It’s even possible that Kruger is denying the relationship not because he’s committed to the closet for personal reasons, but simply to protect his legal interests: after all, he didn’t have a wife or family or deeply homophobic religious affiliation, like so many closeted self-loathing bigwigs do. Would a man who was ashamed of being gay have lived (apparently fairly openly) with his partner, going so far as to give his own personal phone number for inquiries relating to his partner’s car or job? (If you believe the statements put forth in the complaint, which seem thoroughly researched.)

And of course, there’s the fact that he’s voted against marriage equality – something that the mainstream media seems to have avoided grappling with, except to note that “the phenomenon of hypocritical politicians who live gay lives in secret, but vote against gay issues in public, is not reserved for only one side of the aisle.” Somehow it seems more complicated than that, though.

It has something to do with the fact that there are two kinds of lying happening at once here, two kinds of hurting the people that you vowed to help when you took public office. It’s about the fact that this is different than a classic case of self-loathing; without the possibility of probably ever really knowing, of course, it seems plausible to guess that Kruger wasn’t conflicted about his own relationship at all. He bought snacks for Turano’s mother when she traveled; he barely spent time in his own home. Their relationship is said to have been an “open secret” in Mill Basin, and Kruger has a history of being accosted by gay activists who want his secret to come out. By all appearances, this looks like someone who voted against marriage equality on the Senate floor because he knew it was better for his career, and then went home to his long-term boyfriend every night. We don’t even have a paradigm for that kind of duplicity and amorality yet. We’ve been on guard forever against those whose upbringings or religious convictions have led them to want to hurt us; we’ve learned to spot those people in positions of power whose own sense of inner torment about their sexual identity has them unleashing the damage they want to do to themselves on their own queer community. But someone who dispassionately denies basic rights to people who are (in one specific way) just like him, and then takes thousands of dollars of bribe money to buy his own boyfriend a Bentley? This is a new low, and hopefully now that he’s been exposed we can never go there again.