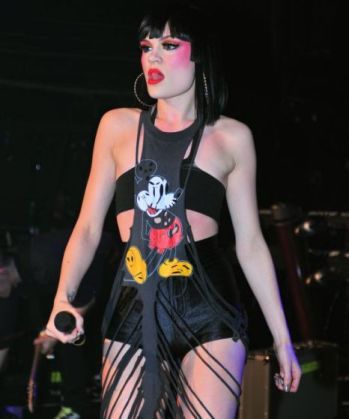 Jessie J, our new favorite queer pop star who made that genderfucking video with all the hot studs in it, has publicly confirmed that she does, indeed, enjoy the sexual company of other women.

On “In:Demand,” a radio show in a country that is not America, Jessie J responded to rumors about her sexuality by reminding everyone that she’s “never denied” her attraction to men and women:

It’s not a secret, but it’s the only thing they can grab onto – they’re like, “She never drinks and she comes out of the party looking like she did when she went in, damn her!”

Jessie said that journalists have been hounding her friends for the scoop on her sexuality: “the amount of people that have contacted my old schoolmates about it… Facebook is a lethal place.”

Jessie J performed at G-A-Y Bar in London this weekend, where fans lined up starting at 8am Saturday morning to secure a peek at Jessie’s thighs/pipes, and “at least one female fan got a little bit overexcited” and threw her “hot pink knickers” into the air. Jessie rocked a tastefully tore-up Mickey Mouse t-shirt and, it appears, hotpants and some tightly-wound pieces of spandex fabric. If you would like to be Jessie J for Purim this year, Sugarscape has a detailed rundown of the concert look.

Jessie J told the crowd that her song “L.O.V.E” is about a girl she was in love with, certifiably one-upping Gaga’s first-album anecdote about “Poker Face” (thinking about having sex with girls while she slept with her boyfriend). Here she is performing that song and talking about her sexuality and not wanting to be put into a box:

see love doesn’t choose a boy, or a girl, nope
when I met you, you hugged my heart and filled my world
so you can stare
I don’t care
you’re the one that ain’t going nowhere

my best friend, that makes me laugh,
the puzzle piece that fits exact to my half
I’ve never felt this way
sometimes I’m stuck with what to say
you hold my hands when I’m driving
you dry my tears if I’m crying
and we just laugh if were fighting

Her new CD, Who You Are, debuts in the UK today and comes out in the US on April 11th. The Guardian UK’s review is kinda meh, but that’s probably because they don’t want to bang her as much as we do. If you’re in the U.S., you can attempt to whet your appetite by downloading Casualty of Love, Price Tag and Do it Like a Dude, and then sitting on your little paws until April.