Jane Lynch in perhaps the epitome of doing no wrong, married her partner Lara Embry on Memorial Day in Massachusetts.  The celebration was very small, with 19 guests including Lara’s daughter and close friends of the couple.

In case you have a dying need to know what food is served at lesbian weddings:

Don’t ask how that information was released to the press. 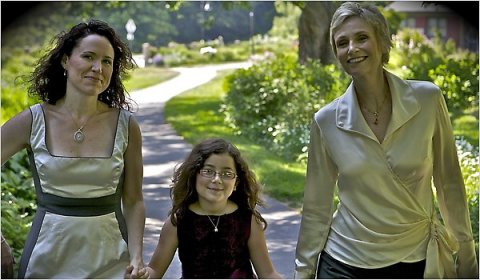 The Lynch met Lara at a fundraiser in San Francisco a year ago and the duo have been together ever since. Lara is a mom to an 8 year-old daughter, which came as a surprise to The Lynch who never anticipated being a step-mom:

“I’m almost 50, and I thought that possibility was behind me, so this a real delight,” Ms. Lynch said, adding that she never went through the whole biological-clock experience. “I never even heard it ticking.”

Also, in a bit of Lynch trivia: unlike many lesbians who move in together after three months, The Lynch had never lived with a woman (at least as of 2008 when she said it in a video blog). That counts for something, right? She told People earlier this year, “It’s just the greatest thrill in the world to find somebody that you want to be with every day.” (@nytimes)

Rue McClanahan died this morning at the age of 76 after suffering a massive stroke. This makes Betty White the last living Golden Girl, in addition to being a person who can do no wrong. Bea Arthur died last year of cancer and Estelle Getty died in 2008.

Remember when Kristen Stewart played Jodie Foster’s daughter in Panic Room? I know, she looked like a little boy. Anyway, they’re still in touch and Jodie’s been giving Kristen lessons on “how not to go crazy” in Hollywood. “And [how to] be a young actor who wants to have a long career. She doesn’t need any help. She’s on the right track. She’s a good girl. And I love that kid. I spent so much time with her.” (@people)

Probs testing out material for Lilith Fair this summer, Kelly Clarkson surprised fans at a Chris Daughtry show in Nashville for a cover of Tracy Chapman‘s “Fast Car.”

The cast of The Real L Word do the NOH8 Campaign. From left to right: Whitney, Rose, Jill, Nikki, Mikey, Tracy. Such fancy jeans! Are we ready for this shit to premiere on June 20? 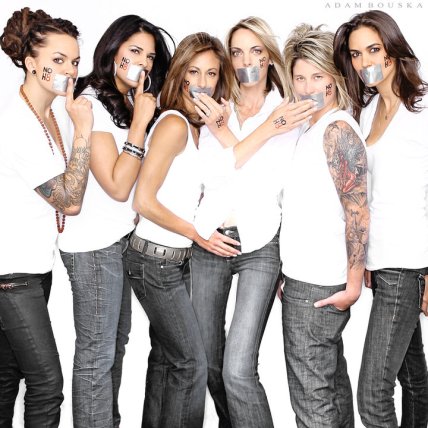 Jane Lynch & Matthew Morrison (Mr. Shu) showed up (in costume!) at one of the Radio City Music Hall shows this weekend and it was pretty much Beatlemania.

Also, check out Chris Colfer (Kurt)’s appearance on The View in which he talks about being bullied “every day” in school.

Pink finally bit the bullet and performed “Whataya Want From Me” – the song she discarded from her latest CD that went on to become a huge hit for Adam Lambert.

A new book, Theatre Geek, explores the world of Stagedoor Manor, the real life theatre camp attended by Lea Michele, Drew Barrymore, Natalie Portman and Mandy Moore (among many others). The camp was fictionalized in the super-gay movie CAMP and immortalized in the documentary Stagedoor, but this book will apparently tell tales of the real shit that went down. (@wallstreetjournal) 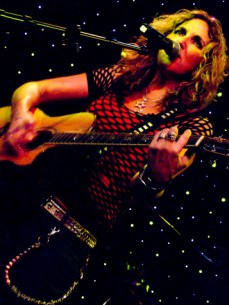 Ya’ll wanted a lesbian country rock star… and you’ve got one! If you like Melissa Etheridge and Sheryl Crow, you’ll love Jennifer Corday, our latest Autostraddle interview. We talk to her about being out in country music, why lesbians love girls with guitars and more! (@autostraddle)

In case you missed it, the full Gaga/Larry King interview. I just noticed Gaga is wearing the same exact outfit as Larry, is this old news? (@towleroad) Also, Salon interviews a doctoral student and a poet & performer to discuss why Gaga is not only entertainment, but worth studying.

“I think Britney Spears was the last pop star, not Gaga. If anything, Spears’ highly publicized descent represented the final fall into the void, a victim of the system. Britney and her shaved head wielding an umbrella at the paparazzi became a “monster”– Gaga, on the other hand, is the pop star resurrected as a meta-pop star.”

Join A+
Related:Gleethe lynch can do no wrong