It’s 2011, but it’s still at least a little notable when someone from our team — that is, anyone female, queer or trans, of color, non-Christian or even Protestant, basically anyone who doesn’t spend Saturdays golfing with John Boehner and the other straight white men down at the country club — makes any kind of successful career for themselves in politics. It’s sometimes notable enough to get some specific media coverage, like this one at the NYT. But sometimes that success isn’t enough to make a difference, and for right now, it seems as though it’s always precarious.

As the NYT explains, the number of women up for Senate nominations in the Democratic party this year are among the highest ever — ten in total, with six of them incumbents seeking re-election, which makes the highest number of incumbents. But the majority of those seats are in the Democratic party, and some current female Senators, like Republican Kay Bailey Hutchison, are retiring. If Democrats as a group don’t do well in the upcoming election, we might see the number of women in the Senate drop precipitously. It would be a quick and disheartening way to lose ground that’s been very hard won for women in the Senate:

In 1922, Rebecca L. Felton of Georgia served a mere 24 hours to replace a dead member, and from then on, women accounted for just one or two members — at times none at all — until 1993. It took the last two decades for the count to reach the current 17. If all or most of the incumbent women prevail in 2012, and even just a few women of the many recruited win new seats, women would reach an all-time high in the Senate. But the loss of just one female Senate seat with no replacements would cost women ground in the Senate for the first time since 1978, when the number of women in the Senate went to one from two. 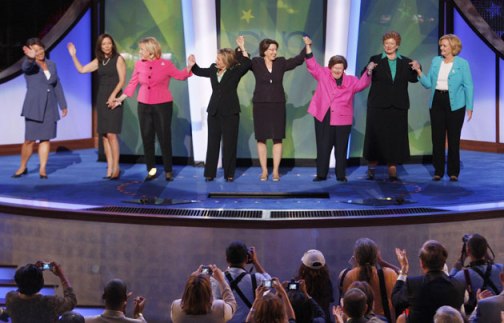 WOMEN SENATORS AT THE 2008 DNC

Women in the Senate are important for more than just meeting a quota — they’re much more likely to champion legislation that would help women and families. Legislative bodies with only or a majority of men tend to have a different focus; their priorities around issues that women face can be so out of touch that they’re genuinely horrifying and dangerous to the women they affect. For instance, the city of Topeka, Kansas just decriminalized domestic violence to save the state money. At the risk of overgeneralizing, how many women legislators would have made the same call?

“I think it is very important for legislative bodies to have women,” said Mrs. Hutchison, who recalled when she was among a handful of female lawmakers in the Texas legislature in the 1970s who crafted legislation to address how rape victims were treated in court. “It wasn’t that the men were against our legislation,” she said, “It was just they never thought about the issue.”

In short, a losing election for Democrats will not only be bad news for the women running, but will likely mean bad news in the long run for all American women.  None of the GOP candidates have been particularly aware of or supportive of women’s issues, especially reproductive rights; as Rachel Maddow covered this week, some of them seem to be fundamentally confused about what birth control is or how it works. If 2012 finds us with a majority Republican, almost-exclusively-male legislative body and a conservative president, it might be a very tough year for women — especially if they’re poor, or single parents, or of color, or all of the above.

And what about queer people? One of the women who’s running for election in the Senate this year is Wisconsin Democrat Tammy Baldwin. If elected, she would be the first openly gay Senator in the nation’s history. Baldwin is open about her sexual orientation, and it shows in her work; she’s “the Co-Founder, Co-Chair of the Congressional LGBT Equality Caucus, a leader on ENDA and hate crimes legislation, and even authored of a piece of legislation extending benefits to same-sex partners of federal employees.” As is the case with many women candidates, however, Baldwin agreed to run after a petition was circulated encouraging her to. Talking to the NYT, Barbara Lee of the Barbara Lee Family Foundation observes that  “Men who have the slightly relevant experience will jump in without a second thought… Women need to be recruited and asked multiple times by multiple people in order to consider running.” And while Baldwin is a strong candidate, she’s also running as a liberal candidate out of highly polarized Wisconsin, where a gay marriage ban was upheld in 2010. Upon her announcement of candidacy, the National Republican Senatorial Committee responded with “We look forward to the clear contrast this race will provide between an extreme Madison liberal versus a common-sense, pro-jobs and fiscally responsible Republican candidate.” 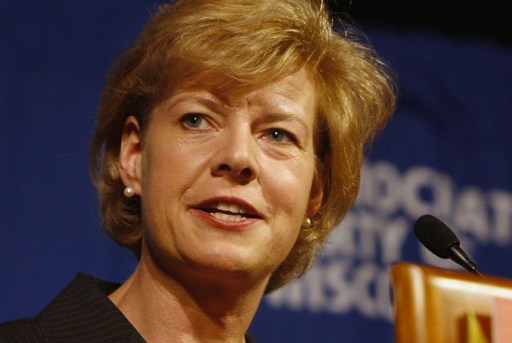 If Tammy Baldwin can’t make it into the Senate, both as a woman and a gay person, what precedent will that set? What if the next Tammy Baldwin can’t be persuaded to run? What if it takes another two decades to return to even the relatively small number of women in the Senate we see now? They’re just a few of the high-stakes questions inherent in the upcoming elections. For now, it might be all we can do to stay informed and vote purposefully. The purpose of our elected officials is to represent the people, their needs and wants; hopefully everyone, women and other marginalized groups included, will be able to see themselves represented in the Senate in the coming year.