When we first started talking about whether it gets better for gay kids in high school, the focus was on helping those kids make it to the future. If we could just help kids make it out of their high schools, out of their close-minded communities, and sometimes away from their unsupportive families, then they could lead happier lives. But in the year following 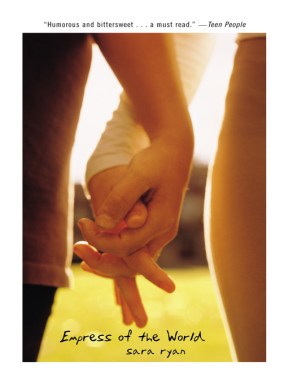 the beginning of that campaign, there have been more and more people making a stand to help high school kids be safer and better off right now, especially in the schools. For instance, California’s FAIR Act will now work to provide queer teens with the opportunity to learn about their history and their role models in class, hopefully providing them with a sense of community and place in the world that will combat feelings of isolation and self-loathing.

And now there’s Amelia Roskin-Frazee, who’s only in ninth grade but is already committed to making ninth grade a better place to be. Identifying as an out lesbian at 14 is brave enough, and since coming out she’s also founded her school’s GSA and served on her school’s diversity committee, and is now a student ambassador for GLSEN. And most recently, she’s created a new book project for high school kids all over America.

The Make It Safer Project provides LGBT books about coming out and life as a queer teen to high school populations across the country, and is funded by online donations from supporters. Amelia has a list of ten books that she has shipped together as a package to high school GSA leaders directly from Amazon, who are meant to keep them on a classroom bookshelf, or donate them to the school library if “the GSA is sure that the library will keep them safe and available for all students.” The books might sound familiar — most of them are the same ones Riese and Laneia have read!

The package includes six fiction and four nonfiction books: Annie On My Mind, by Nancy Garden; Empress of the World, by Sara Ryan; Luna, by Julie Anne Peters; Boy Meets Boy, by David Levithanp; Rubyfruit Jungle, by Rita Mae Brown; It Gets Better, ed. by Dan Savage and Terry Miller;GLBTQ: The Survival Guide for Gay, Lesbian, Bisexual, Transgender, and Questioning Teens, by Kelly Huegel; Queer: The Ultimate LGBT Guide for Teens, by Kathy Belge; and Like Me, by Chely Wright.

The project targets schools where resources aren’t already available, and students might be looking for answers without the support of adults — places where GSAs aren’t allowed, or funds aren’t available to buy queer books. The Make It Safe Project’s website is also growing into a resource- and strategy-sharing space for students trying to start their own GSAs, as Amelia did. Oh, and also? She likes to write novels in her spare time, and makes costumes for the San Francisco Carnival. In only 14 years, Amelia Roskin-Frazee has made huge strides towards making the world better for her generation, both now and in the future — maybe she can inspire some adults to follow her example.

Join A+
Related:Daily Fixit gets betterread a f-cking bookyouth and teenagers