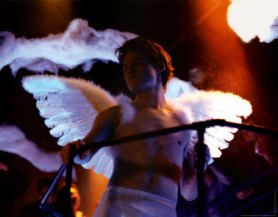 I have kind of a conflicted relationship with Dan Savage – I’ve read his columns for forever, and I love how he encourages people to leave shitty or abusive situations and to own whatever it is they like in bed, while simultaneously hating his biphobia, transphobia, and occasional gay male brand of misogyny. His newest project, though, is unequivocally and inarguably good, and I want you to put down whatever you’re doing and pay close attention while we talk about it.

It’s called It Gets Better, and it’s about telling the younger generation of baby queers exactly that – that things will get better. Especially those who live in rural areas where there may be no PFLAG or GLSEN, who have homophobic parents or communities, or who have no opportunity to see real live gay people in their own lives. They need to know that the way things feel when you’re fifteen and trying to figure it all out isn’t going to last forever, and they need to see that there are gay adults who have made it, and who are living the happy and fulfilled life that you can’t even imagine for your future when you’re young and scared. (@komo)

Savage introduced the project in yesterday’s column, in response to the question “I just read about a gay teenager in Indiana—Billy Lucas—who killed himself after being taunted by his classmates. Now his Facebook memorial page is being defaced by people posting homophobic comments. It’s just heartbreaking and sickening. What the hell can we do?” Part of Savage’s response:

…gay adults aren’t allowed to talk to these kids. Schools and churches don’t bring us in to talk to teenagers who are being bullied. Many of these kids have homophobic parents who believe that they can prevent their gay children from growing up to be gay—or from ever coming out—by depriving them of information, resources, and positive role models.

So here’s what you can do: Make a video. Tell them it gets better.

He’s since created a youtube channel for It Gets Better, which first featured one lonely video of he and his husband. I feel it goes without saying that you should watch it ASAP, and perhaps put it on loop with Gaga’s DADT PSA for maximum affirmation.

As of the writing of this post, there are 18 other videos that have been added by other users to the channel. I note, however, in a completely non-critical way, that almost all of them feature men. This is fine. Savage is a gay man, probably the majority of his readers are gay men, and the majority of the teenage suicides he’s responding to – like Billy Lucas’s – have had male victims.

But you and I both grew up young and gay and scared, and we both know how badly queer girls need to know that there’s nothing wrong with them, that their hearts are beautiful and perfect and made to love exactly the right people, and that if they can make it through this day and this week and this year then it will only get easier, only get better. But when you’re in middle school or high school or even college there’s precious little evidence to support this hypothesis. So please, ladies, grrls, bois, dykes and bisexuals and butches and femmes and womyn and genderqueer folk too, please consider taking 3 minutes of your time and letting the next generation know that it will be okay, that it will be better than okay.

Maybe it wasn’t so bad for everyone, maybe I’m generalizing, but I can remember a time when being told that it would get better – not even good, I was ready to settle for just incrementally better – was enough to get me through. Also that in the frenzied Googling of “lesbian” and/or “bisexual” that inevitably takes place, it would be nice to come across this instead of Christine O’Donnell’s website or shitty porn. I don’t know. Do you know what I mean? You do, right? I don’t know, maybe just talk for five minutes into a camera about how you and your girlfriend just got a kitten together, or about how your college has a GSA and also a hot girl who sits in front of you in Geology. Come on. This is a thing. You can do this.