Fortune Feimster and her then-fiancée Jacquelyn “Jax” Smith were always planning to get married in 2020. They already felt married — having been together for 5 1/2 years and engaged for 2 1/2 years — but 2020 would be the year that they made it official. They wanted a summer wedding, a small, traditional service with family and close friends, followed by a big blow-out celebration the next day. They’d just started looking for a venue when COVID struck, shutting down their search for the perfect venue and dashing their plans for the perfect wedding. But as the pandemic dragged on, the couple began to reconsider.

“For us, the big shift happened when Ruth Bader Ginsburg died. This is something, as a gay person, you do think about — what the Supreme Court situation is — for straight people, they have the luxury of not having to take that into consideration. But we knew that means that someone else could potentially get nominated, that would make the Supreme Court, a 6-3 very conservative Supreme Court,” Feimster explained on her podcast, “Sincerely Fortune.”

In isolation, the Court vacancy probably wouldn’t have sent the couple rushing to the altar; after all, marriage equality felt like settled law and, in any case, the election was just a few weeks away. But then came Kim Davis v. David Ermold. The Supreme Court denied the cert petition for the former Kentucky clerk but Justices Clarence Thomas and Samuel Alito took the opportunity to denounce Obergefell — the SCOTUS case that gave us marriage equality — in a written statement. Suddenly, the thing that Feimster and Smith thought was settled felt like it was, once again, up for negotiation.

Feimster and Smith weren’t alone in their anxiety. We heard from Autostraddle readers who were grappling with the same uncertainty, unsure what Amy Coney Barrett’s confirmation means for marriage equality or if they should get married urgently as a safeguard. The rapid succession of events — the death of RBG, the statement from Justices Thomas and Alito and the nomination and subsequent confirmation of Amy Coney Barrett — left a lot of LGBT folks reeling, concerned that those hard-fought wins would be stripped away from our community. But were folks right to be worried? 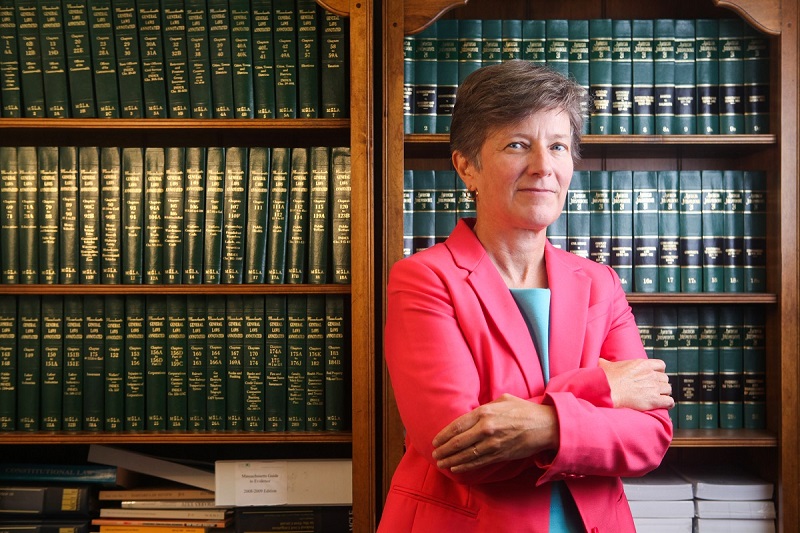 “I’m worried too,” Bonauto conceded in an email interview. “But rather than go there, one thing I know for sure is that the only way to bring back the rule of law and justice for all, not to mention common decency and respect and what we value in our country and communities, is by staying engaged and active, by listening and learning for however long it takes.”

Part of that engagement and activism, Bonauto says, must be about reclaiming the prevailing narrative about marriage equality from its detractors. Opponents of marriage equality have been relentless in their efforts “to delegitimize the Court’s ruling and reasoning in Obergefell” and the statements from Justices Thomas and Alito are just the latest salvo. She adds, “we need to explain that the Obergefell ruling was constitutional and correct. After all, our Constitution does not ‘tolerate classes among citizens.'”

No one knows more about the fight for marriage equality than Mary Bonauto: it has been the cause of her life. After President Clinton signed the Defense of Marriage Act, it was Bonauto who joined with lawyers in Vermont to seek marriage licenses for same-sex couples in the state. She’s responsible for the lawsuit that brought same-sex marriage to Massachusetts in 2003 and Connecticut in 2008. She developed the legal strategy to undo DOMA — leading the legal effort in Gill v. Office of Personnel Management and running the amicus effort for Windsor v. United States — before arguing Obergefell before the Supreme Court in 2015. Simply put, there would be no marriage equality without the work of Mary Bonauto… and, as such, there’s no one better to assess our current landscape than her.

Bonauto’s reticent to weigh in on whether queer couples should be in a rush to get to the altar, in fear of what might come from the Supreme Court. The decision to marry is a profoundly personal one, she says, and should be made after considering all the options.

“There is nothing at this moment or in the immediate term that could undo the Obergefell ruling,” Bonauto pointed out. “And we will deal with any challenges that come, just as the LGBTQ Legal Groups have dealt with efforts to create ‘skim milk marriages’ that take away protections from married same-sex couples.”

While Obergefell isn’t under immediate threat, Bonauto admits that the statement from Justice Thomas and Alito could be a precursor to a future reversal attempt. She notes that in Shelby County v. Holder, the case that dismantled the Voting Rights Act, and Janus v. AFSCME, the case that barred unions from collecting “agency fees” from non-union members who, nonetheless, benefit from the Union’s work, the Court reversed major precedent after justices issued similar warnings in earlier cases.

But whenever the challenge comes, Bonauto stands ready to fight back: she easily summons precedent to battle back the arguments against marriage equality. On suggestions that Obergefell created new rights, Bonauto points to the dozen cases in which the Court has established a link between marriage and liberty. She recalls Loving v. Virginia which establishes “choosing the person you will marry is a ‘vital personal right.'” And in her amicus brief in Fulton v. City of Philadelphia — a case that’ll determine if a Catholic adoption agency can turn away same-sex couples, even as the agency works for the City and contractually committed not to discriminate, which is slated to be heard by the Supreme Court today — she asserts that religious freedom cannot come at the expense of non-discrimination efforts meant to protect “LGBTQ people, as well as people of color, members of minority faiths, women, people living with disabilities, and our broader society.”

“Because of the Nation we are, we have struggled to find the right balance of accommodating religious institutions and clergy/faith leaders with general laws,” Bonauto argues. “But don’t throw out that balance now just because we are talking about LGBTQ people, and we shouldn’t allow individuals to deny people jobs, goods, services, housing, health care and more just because of who they are.”

Ultimately, Bonauto says, “Stripping away marriage and other rights and responsibilities only from LGBTQ people is entirely unwarranted and illegitimate. The idea of trying to take away people’s existing marriages is legally absurd. Moreover, LGBTQ families and children are part of the fabric of our Nation. And we all know it.”

While she is worried about the potential erosion of our rights, Bonauto remains optimistic, focusing instead on the good news that often gets obscured by this administration. She notes, “we have blatant voter suppression and yet we see people standing up for our democracy and voting in record numbers even before Nov. 3. We see magical thinking about the pandemic wafting away, but most people are trying hard to protect themselves and others. We have seen patriots standing up for racial justice, for women’s rights, for LGBTQ+ people, for each other, on a scale our country hasn’t seen in decades. Surveys of Americans’ positions on many issues makes me hopeful that we have much more common ground than usually acknowledged.”