“As shameful as it feels to ask for money on the internet, it’s how you develop a committed community. People do pay for writing. They do all the time. They have always paid for it, since the first typeset books nearly six centuries ago. People tend not to pay for writing that exists for the sole purpose of holding our attention for just long enough for a page to load. But we actually have incredible stories to tell.”

In July of 2014, we introduced Autostraddle Plus. It aimed to be an easy way for readers to support beloved independent LGBTQ media in a landscape increasingly dominated by enormous, well-funded, corporately owned websites with deep pockets and a sudden desire for some queer content of their own. Without our 1,300 A+ members, we’d have shut down earlier this year. We’ve been doing the work against all odds for nearly seven years — going without health insurance, living with our parents, paying self-employment taxes on small stipends, racking up debt, working 60-80 hours a week, cutting corners wherever possible — to grow and maintain this beautiful, thriving community. Our competitors have entire teams devoted to social media, advertising, SEO and content partnerships. They have accountants, lawyers, marketers, merchandise developers, advertising budgets, video crews and tech teams. We don’t. The senior editors do everything we can do ourselves, on top of our writing and editing responsibilities, because we need to free up as much money as possible to pay queer people to write and draw and photograph things for you. We have one designer and one tech director, each juggling a workload normally performed by dozens. We’re also desperately in need of a redesign… but can’t afford the time or the expense.  Because of A+, we’re now proud to say that we pay all our contributors. But it’s not enough, not just yet.

The internet is changing, and it’s changing fast. Social media is the primary traffic driver, and those who can’t invest financially in social media are suffering. Ad-blockers are making it so that while big publishers cash in on native advertising and Facebook deals, it’s quite possible that no indie publisher will survive without charging members for content. We’re “lucky” that we stopped being dependent on ad revenue a while ago due to advertisers’ general disinterest in the LGBTQ women’s market (we make about $50/day on advertising), but we also face a very different challenge: our community-oriented focus means paywalled content is much trickier to respectfully integrate and promote. Whereas a premium program like Slate Plus can entice members with several paywalled posts a day, we can’t — we have to walk a fine line between actively recruiting new members and not alienating those who can’t afford it.

Today, we’re introducing a new A+ level that we hope will make supporting us easier than ever, even if you’re low-income or only mildly interested in our site to begin with. We call it:

To maintain and improve Autostraddle through 2016, we need more money. We’ve hit an A+ plateau. Last week we put out a call for writers and the response has been phenomenal, exceeding our wildest dreams. Right now my inbox feels like a Sunday afternoon at the used bookstore, just aisles and aisles of brilliant possibilities. We’ve gotten more applications from people of color in the past four days than we have in the past four years combined. We want to be able to bring you as many of those voices as possible, but we’re stretched tight financially already (did I mention that we need a redesign but can’t afford it? We do!). THERE ARE SO MANY COOL PEOPLE IN MY INBOX PLEASE HELP US BRING ON MORE OF THEM. (Also if you wanna just contribute to us straight-up, please do!)

Not gonna lie, we’re downright jealous of the writing that sites like Broadly, Bustle, and Buzzfeed can afford. We don’t have the investment capital or lucrative ad contracts that they do. Just look at this graphic we made you in March about the accumulated investment capital other media companies are working with:

Most of the companies on this list have gotten most of these investments in the last 1-3 years, whereas we’ve been around for 6.5! Also, The Huffington Post (which has a gay vertical) was purchased for $315 million in 2011.

So, let’s talk about Cobalt Level. Cobalt Level gives you access to everything Bronze-Level A+ members can access, the only difference is you won’t get an A+ sticker in the mail. This includes:

Now, here’s the thing: if a bunch of monthly bronze members cancel their memberships to re-join at the Cobalt level, this whole plan will fall to pieces. In fact, everybody I suggested this idea to warned against it, convinced that a massive downgrade could occur. I said Autostraddlers aren’t like that, they want to support us financially as much as they possibly can. If you come to a crossroads in your life where the choice is to cancel A+ altogether or switch to Cobalt, then we’re glad this option exists for you! But if you can afford Bronze, please don’t play us like that and downgrade.

Where Does My Money Go, Huh?

Good question! Here’s an infographic for you of where all of the A+ money we have collected since July 2014 has been spent. (Also, although it’s not illustrated here, a lot of the work that goes into making A+ function, like the programming, design, the Insider, the questions and so forth are done by the senior staff as part of their regular jobs, which isn’t included in the 3.4% below.) 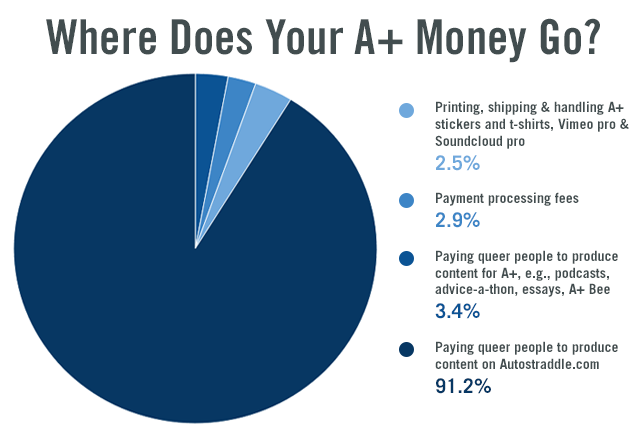 Still Don’t Wanna Join A+? Here’s how else you can support us:

As always, thank you to everybody who has supported us over the past 6.5 years. We have long to-do lists, but very high hopes.