Yesterday was the Transgender Day of Remembrance, where we honor the memory of people who have been murdered for being trans or for having a different body/mind/heart/soul than someone thought they should have. There are a staggering number of people that we find ourselves honoring this way, a number that is so large it seems impossible and could easily incapacitate you for the rest of the day just trying to process it, could incapacitate you for the rest of your life. For some people it has.

It’s when we remember those who have lost their lives and remember that for those trans people who survive, there is a constant threat of changing groups, of joining the ranks of those who are remembered next year. C.L. Minou of The Second Awakening and Tiger Beatdown says,

“I will remember because that body lying somewhere unmourned could be me. Because it is me… I won’t shrug or carp about how there’s so much death brought up today. Because there is a lot of death. And that needs to be remembered, to be brought up, to be shoved in the face of those who are indifferent to it until something changes, really changes, and trans people are allowed to join the human race.” 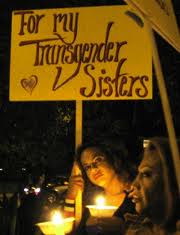 oday isn’t the Transgender Day of Remembrance, it is Sunday Funday. So without making light of or de-emphasizing yesterday, I want to suggest that today be a celebration. If you’re remembering the dead, it means you’re still here, and probably that you have a network of people who love you and have your back no matter what and they got you this far and they’ll get you even farther. If you’re reading this, you’re still here, and so am I.

As Queerty says, “Transgender Americans are making strides worldwide, whether on the basketball court or the sorority house or the workplace, and that’s because of increased visibility and the queer community supporting members of our own.”

And even when we’re not making what look like strides worldwide, even when the community is grieving and hurt and in constant physical and psychological danger, we are still moving forward, because just existing in a culture that hates you is a big fuck you to that culture, just getting up and going to work is a huge deal. Even on days when you don’t do that, when you can’t quite make it there or don’t have a job because no one will hire you, you are moving forward. I was recently led to the badass pamphlet QUEERS READ THIS from a really great tumblr and I wanna show you this part:

“The strong sisters told the brothers that there were two important things to remember about the coming revolutions, the first is that we will get our asses kicked. The second, is that we will win.”

Ok? Remember that. Write that down. We’re getting our asses kicked every day. But we’re going to win.

Do you really care about anything besides Deathly Hallows right now? My tumblr dash and the comments on this post would indicate that you do not. SO. Let’s get down to it. I haven’t seen the movie so we’re not going to talk about it in specifics. I just wanna know your thoughts/feelings. Did you go to the midnight showing? Did you dress up? Was it hot? Here is a rundown of 10 good Harry Potter costumes. They are pretty good I guess but I feel like you guys can do better. Also, would you like to look at this roundup of pictures of Emma Watson in magazines? Yes. I don’t like the one where it looks like she’s poking her eyes out b/c it’s scary but I like this one, it’s my favorite. (@mentalfloss) (@ontd) 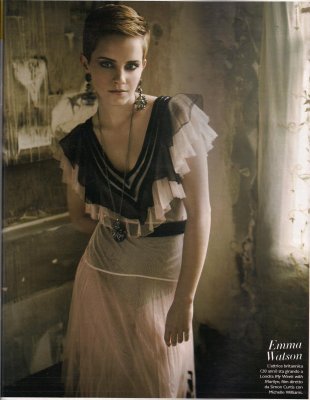 Also – and this is really the entire point – here is a tutorial on making your own hyperrealistic magic wand out of PAPER. I don’t care if this is news or not, it is awesome. Ok so maybe you also need glue. I think you guys can handle that. Omfg don’t even wait to finish this post just go make a wand RIGHT NOW. (@instructables)

The FDA advisory committee has recommended that the HPV vaccine Gardasil be approved for treatment of young boys as well as young girls, which is great news because it represents a recognition that some of those boys are going to grow up to have sex with other boys and therefore be at risk for cancer and other negative health effects if exposed to HPV. It’s like if sex positivity met the medical field. What a thing. (@queerty)

There is something so pleasingly symmetrical about this – Emmett Honeycutt (Peter Paige) from Queer As Folk comments on Kurt (Chris Colfer), saying that he thinks his presence on Glee “does a lot of good.” Specifically, “I think any time we’re getting into people’s living rooms showing them complicated, interesting, relevant portrayals of gay people, we’re doing something right. It matters.” It is hard to argue with that sentiment, given its source! (@ontopmag)

We Are The Youth is a photographic journalism project recording the stories of queer kids and teens all across America. Jezebel featured the story of Audri, from Laurel, Mississippi, and it is all kinds of perfect/heartbreaking. “I came out at, like, 12-years-old, first as bisexual. I thought I liked guys a little bit but I really did like girls a whole lot. I came out to my mom before I came out to everyone at school. I was like, “I have something to tell you…” and I couldn’t get it out. And she said, “You’re not sexually active, are you?” And I’m like “God no. I’m kind of bisexual.” She’s like, “You’re 12. You don’t know what you’re talking about. Go back to sleep.” But now my mom is a PFLAG mom and has rainbow stickers all over her car.” (@jezebel)

I’m sorry, but this is perfect. Anne Hathaway (who left her church because she wouldn’t accept its views on her gay brother) has already planned out her fantasy guest spot on Glee. “I would want to play Kurt’s long lost aunt, his mother’s sister, who is also gay, who comes back to help him deal with his sexuality, and I would sing “You Are Not Alone” from Stephen Sondheim’s epic show Into The Woods.” OKAY. SIGN HER UP. (@foreign)

This is an article about the history of America’s zombie fascination. What. It’s interesting. World War Z was actually a really good book. YOU DON’T HAVE TO CLICK ON IT IF YOU DON’T WANT TO OK. “In America, the legends of zombies grew out of the cultures created by African slavery and colonialism in the Caribbean. Folklore experts have traced the idea of the zombi back to Vodoun practices in Haiti, where tales have long been told of people brought back from the dead as shambling shadows of themselves. Sometimes these zombis are under the control of a master, and sometimes they simply wander mindlessly.” (@i09)