First off, you guys, I have to admit something.  I’m not a theatre person.  I love the idea of musicals – I really do! – and I’ve watched Liza Minnelli in Cabaret approximately 96,345 times, but it takes a great deal of pressure, whining, and Jewish guilt to get me to agree to see a Broadway play.  In all my years growing up in the NYC metro area, I’ve seen probably five shows total, and one of them was Cats when I was nine.

All that is about to change, because Playbill.com reports that Alanis Morissette (patron saint of adolescent feelings) is adapting her classic 19995 album Jagged Little Pill into a Broadway musical.  Morissette is working with Tom Kitt (who also helped arrange Green Day’s enormously successful musical American Idiot as well as Bring It On: The Musical) to orchestrate and arrange all the songs you used to sing into a hairbrush when you were very angry at the world but not quite sure why into stage productions.  Yes, you read that right – songs like “You Oughta Know,” “All I Really Want” and “You Learn” are about to become showtunes.  The show will be produced by Arvind Ethan David and Vivek T. Tiwary, who also produced American Idiot. 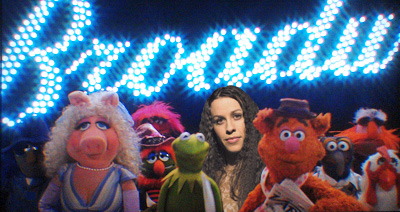 would she [something wholesome] in a theatre?

“I look forward to taking the heart of Jagged Little Pill and expanding its story, fleshing it out into ever deeper layers of emotionality, specificity, humanity, power, physicality, spirit and fabulism,” Morrissette said in a statement. “I look forward to collaborating with Vivek and Tom and our whole inspiring team to create something greater than the sum of our parts.”  Enough about you; let’s talk about life for a while…

Will the Jagged Little Pill musical be as incredible and cathartic as the record was for all of us as angsty adolescents, or will it be colossally ridiculous?  Will Full House‘s Dave Coulier step in as the backstabbing ex-boyfriend?  Will any of the ironic plot twists actually be ironic, or just crappy things that happened?!  The future holds many mysteries, my friends.