Hello all you science queers! I’ve found you an awesome talking point for your next social setting where you want to sound smart and informed (so…always?) A few weeks ago on Oct 3, The New York Times published a long article about women in science by Eileen Pollack.

Pollack has spent the last few years traveling across the country to different universities and talking to women and professors about the persistent dearth of women in science; she herself graduated with honors in physics from Yale, but didn’t pursue a graduate degree. “At the end of four years, I was exhausted by all the lonely hours I spent catching up to my classmates, hiding my insecurities, struggling to do my problem sets while the boys worked in teams to finish theirs.” Of course, she’s now a professor of creative writing at the University of Michigan, so her career path didn’t turn out that badly. But she always wondered in the back of her mind what would have happened, or how things would have turned out, if she’d continued on to a physics grad degree. Because even with all her success, she felt like a failure. “I locked my textbooks, lab reports and problem sets in my father’s army footlocker and turned my back on physics and math forever.”

Now, you may remember an article from this series a few weeks ago about Dr. Ben Barres, who was catalyzed to speak out about misogyny in the sciences after Lawrence Summers, then the president of Harvard University, said some really sexist things about innate differences in aptitude along gender lines. Well, Summer’s comments also made Pollack angry, and her indignation started her quest to learn more about the barriers that women come up against in the sciences. Funny, how the most abrasive and offensive instances of bigotry often springs a leak in the dam (a leak in the dyke, aahhh!) and starts groundswell of activism and lead to longer-lasting, change-making movements. So thanks, I guess, Dr. Summers. 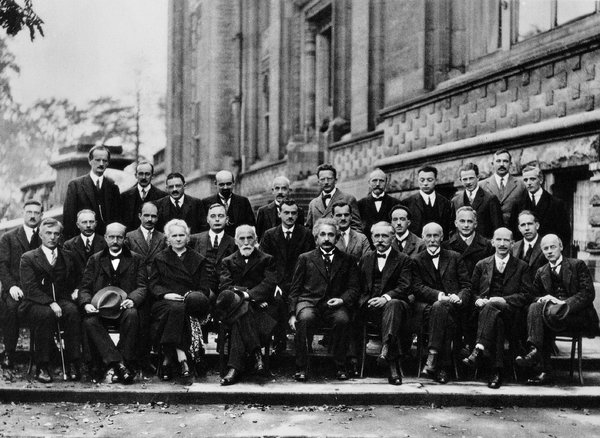 From Pollack’s article comes this picture: attendees of the Solvay Conference in 1927. Look for Marie Curie in the front row; she was the only woman in attendance.
via nytimes.com

In many ways Pollack’s article was important and timely. Discrimination in the sciences is an issue that direly needs more publicity and honest discussion, so I don’t want to discount her well-researched and articulate piece. But in many ways, from a queer-feminist perspective, it was a total disappointment. She missed a critical opportunity to widen the discourse when she said flatly, in her one and only mention of the queer population: “The lesbian scientists I talked to…reported differing reactions to the gender dynamic of the classroom and the lab, but voiced many of the same concerns as the straight women.” Other than this single mention of “lesbian” women alone, she does not include or provide room for any alternative gender or sexual identities.

Much of her language reveals a disappointingly essentialist view of gender that all of our lovely queer biologist and geneticist readers would quickly eschew. Also, she spends paragraphs talking about girls not doing science because of fears that boys won’t want to date them. She discusses shows like The Big Bang Theory, in which the scientist girl is depicted as geeky and undateable – and what girl would want to consign herself to that?

I don’t actually watch this show but as an aside, geek culture as shown by The Big Bang Theory has already been thoroughly debunked in feminist circles: that it welcomes male geekery with open arms, but can’t quite get around to allowing its girls the same thing.
via feminspire.com

Ugh. Obviously not all women want to date boys, and in a world of far greater concerns, is this really a question deserving of that much attention? What about the constant head-chatter of internalized homophobia and sexism as we walk through classes with no one who looks like us, day in and day out? Or the overt discriminatory remarks of classmates or, at times, professors? If you asked some of our earlier profiles, like Dr. Donna Riley or Rochelle Diamond, I doubt they’d say that wondering who would date them was even on the list of their worries. Diamond was fired after a co-worker sabotaged her work, and assumed for years it was simply reflective of her own lack of ability. Riley experienced written anti-gay micro-aggressions on the clothing of her classmates, and has repeatedly been insulted by other faculty solely on the basis of her bisexuality. Even you guys, in your comments on these articles, have some real and intense stories of sexuality-related discrimination and harassment. So in limiting her scope of attention to only heterosexual, cis-gendered women, Pollack unwittingly marginalizes a large segment of the very population whose marginalization she’s trying to highlight.

That large problem aside, many of her points are important and valid, and you should still know about them. For instance, she writes: “I was dismayed to find that the cultural and psychological factors that I experienced in the ’70s not only persist but also seem all the more pernicious in a society in which women are told that nothing is preventing them from succeeding in any field. If anything, the pressures to be conventionally feminine seem even more intense now than when I was young.” This is a problem that this series has highlighted: that there are still huge barriers to people of any minority status succeeding in the field — but they’re hidden, invisible, tucked away in professors’ and peers’ preconceptions and latent biases. We’re told there’s nothing holding us back, so if we don’t succeed it’s our own damn fault. And this, I believe, leads to the exact problem she described earlier: just as women are told there should be nothing standing in their way to success, the general silence around queer struggles leads the casual observer to believe that there is nothing standing in the way of their success. 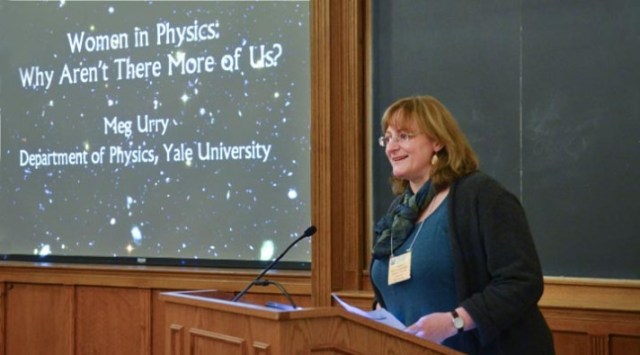 Dr. Meg Urry, professor of physics and astronomy at Yale, spends much of her time working against sexism in science.
via news.yale.edu

And yet, there are huge obstacles. Dr. Meg Urry, a professor of physics and astronomy at Yale, wrote in an essay published in The Washington Post that women leave science academia in droves not because they are incapable, but because of the “slow drumbeat of being under appreciated, feeling uncomfortable and encountering roadblocks along the path to success.” But there is no single event that you can name and get righteously angry about. And, frankly, if you’re a smart woman or queer, and you know you can do better and be happier elsewhere in the work force, why would you stay?

Happily many of you have stories of being pleasantly surprised at feeling none of this; in our open threads I have been increasingly happy to hear those stories, that you feel nothing but acceptance and support from your advisors and peers, about your sexuality or gender or whatever. But some of you, also, have mentioned the exact kind of feelings of isolation or exclusion that Dr. Urry discusses. And this is the overriding strength of Pollack’s article: it discusses the persistent strength of latent biases, and that in and of itself is constructive and important. She is currently working on a book about women in science, and I hope that she will include more knowledge and understanding of all womens’ experiences, not just the cis-gendered heterosexual ones.

Author’s Note: After I published this piece, I contacted Ms. Pollack herself to ask about the dearth of attention paid to queer women scientists in her article. I appreciated her quick and polite response, and she explained to me that the article was only a small portion of a book with a much larger scope. Sections in which she did discuss issues of queer scientists were cut out by the Times at the last minute in the interest of brevity, and she herself was also “horrified” that the final product ended up being so heterocentric. We have discussed other queer scientists to potentially mention or reference in future writing on the topic, and all in all, it’s been a great communication! At the end of this article I write that I hope in her forthcoming book she includes a greater diversity of women’s experiences, and she has already done just that.