+ A lesbian couple from LA says they were arrested for kissing in public when they visited Hawaii on vacation — the case against them was thrown out after five months, and now the couple is filing a lawsuit.

They said Harrison, who was off-duty but in uniform, followed them to the checkout along with a store employee, threatening to have them cited for trespassing because of their behavior. Wilson said she was confused about what they’d actually done, so she called the police. She said she was on the phone with dispatch when Harrison grabbed her arm. Guerrero then tried to step in. “I got punched in the face by him,” Wilson said. “I split my nose open. We were on the ground.” The women said Foodland employees were then instructed to hold them down until someone found zip ties. “They took us down to the basement of Foodland where they continued to harass us about our conduct in the store, asking us if it was worth it, if we were happy where we are,” Wilson said.

+ Ben Fields, the school resource officer who slammed a young black girl to the ground in her classroom on video, has been fired. It was concluded that his actions were “not acceptable.” Reports indicate that the 16-year-old student that Fields assaulted is estranged from her mother and is currently living with a foster family. The Justice Department and FBI have agreed to open an independent investigation into the assault at Spring Valley High. For context, in July Mother Jones reported on how at least 28 students have been seriously injured by school cops over the past 5 years. Injuries have included chokeholds (the police practice that killed Eric Garner) and brain injuries. One student, Derek Lopez, was shot to death. He was 14 and unarmed.

+ Paul Ryan is officially gonna be the next House Speaker. Some Republicans are hoping Ryan will somehow be able to unify and empower a deeply divided party; some other Republicans don’t have high hopes, like Rand Paul, who expressed in the debate last night that he expected dynamics in the House to stay pretty much the same. Regardless of who the Speaker is, in the event that we have a Democratic president, there will probably still be neverending gridlock as a Republican-controlled house tries to block anything they want to do. 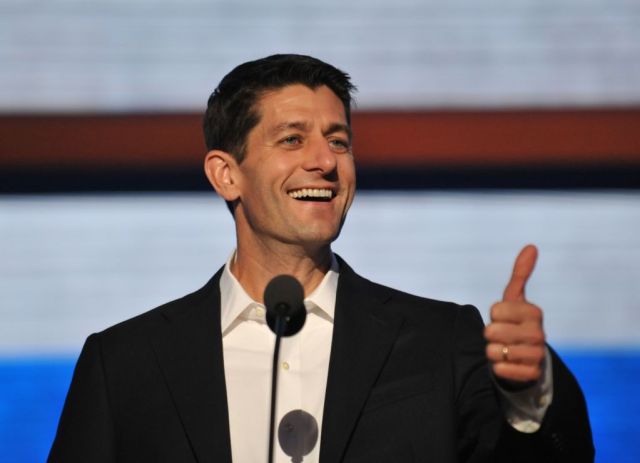 + Speaking of Speakers, former Speaker of the House Dennis Hastert has plead guilty to paying hush money to keep someone quiet about “decades-old misconduct.” Hastert was the longest-serving GOP Speaker in US history.

+ Congress has been locked in a battle for a while now about the federal budget; this week, they’re trying to push through a budget agreement. There’s been lots of secret behind-closed-doors negotiations and last-minute changes required to even get to this point, and virtually nobody is getting what they wanted out of a budget, but it does prevent a big Medicare Part B premium increase and a big cut to Social Security benefits.

+ In the UK, trans woman Tara Hudson is being sentenced to 12 weeks in a male prison, and the Ministry of Justice has refused to intervene. In order to be housed in a prison facility appropriate to her gender, Hudson would need to have a “Gender Recognition Certificate,” which requires 140 pounds and the approval of medical officials.

+ If you watched the debate last night, you’re already probably feeling aware of this, but: Ben Carson’s campaign platform doesn’t really make any sense. He keeps saying one thing to the press and then his team puts something significantly different in his platform itself, leading to bafflement all around.

+ TIME has a piece on Bernie Sanders’ “evolution” on gay marriage. It’s also about how he’s trying to carve out his platform as more pro-gay than Hillary’s, calling into question her claim that she only supported DOMA because she thought it would safeguard against “even worse” legislation.

+ Alabama tried to cut off Medicaid funding to Planned Parenthood much like Texas and Ohio have, but a district judge isn’t letting them.

In his 66-page opinion, Thompson said Alabama did not identify a legal reason to cut off funding to Planned Parenthood and that the state’s action likely violated a free-choice-of-provider provision of the federal Medicaid Act that limits a state’s ability to bar family planning providers for reasons unrelated to quality of care.

+ Outrage is growing in Cleveland over how the Tamir Rice case is being handled.

Some legal experts suggest that the reports could improperly influence the pool of people serving on the grand jury, who began hearing evidence in recent weeks and will ultimately determine whether Loehmann should face charges. The development adds to a cloud of questions hanging over the case ever since Rice’s death almost a year ago—including why Loehmann and his partner who drove the squad car, Frank Garmback, have never spoken to investigators.
“The idea that this is somehow making it more fair and transparent, I think, is disingenuous.”

Delores Jones-Brown, a former prosecutor in New Jersey and a professor at the John Jay College of Criminal Justice, says it was unusual that McGinty enlisted a Colorado prosecutor and a former FBI agent to analyze the evidence and then release their findings. “I have never seen an incident in which that happened before,” she said, adding, “Normally it would be the defense attorney’s responsibility to get those kinds of experts.”

+ A new law in New York City will ban employers from asking if an applicant has been convicted of a crime during the initial stages of the application process or listing “background check required” when listing a job posting.

+ Rudrani Chettri Chauhan, a trans woman model in Delhi, was attacked by motorists who appeared to think she was a sex worker while she was with her boyfriend.

“The only reason to get so violent for those men was they wanted to touch me all over and talk to me. And when I and my boyfriend opposed to what they were doing, they got so angry that started hitting both of us,’ she said on Facebook.‘Those men believed that as a trans person I can be treated and handle any way they want and I should not be opposing it.”

+ In Wisconsin, the DEA has destroyed the hemp crop on Menominee Tribe’s land as part of the war on drugs. The Menominee legalized the growing of non-psychotropic industrial hemp by Tribal licenses in May, and say that their hemp was a legal crop allowed by the Farm Bill. Chairman Besaw responded to the destruction in a statement:

“I am deeply disappointed that Obama administration has made the decision to utilize the full force of the DEA to raid our Tribe. We were attempting to grow industrial hemp for research purposes in accordance with the farm bill. We offered to take any differences in the interpretation of the farm bill to federal court. Instead, the Obama administration sent agents to destroy our crop while allowing recreational marijuana in Colorado. I just wish the President would explain to tribes why we can’t grow industrial hemp like states, and even more importantly, why we don’t deserve an opportunity to make our argument to a federal judge rather than having our community raided by the DEA?”