I love nothing better than a new cookbook to dive into for a holiday present, and I bet you’ve got people on your shopping list who feel that way too. If you’re going to buy cookbooks for your friends and family, why not buy them queer cookbooks and put money in the pockets of queer chefs (not to mention Autostraddle, when you buy through the Bookshop links below)! While the following cookbooks are all over the map in terms of format, type of food, and style, they are all authored by queer humans. Whether you want a gift for your queer vegan BFF or your conservative older relative, I’ve got a queer cookbook for you. 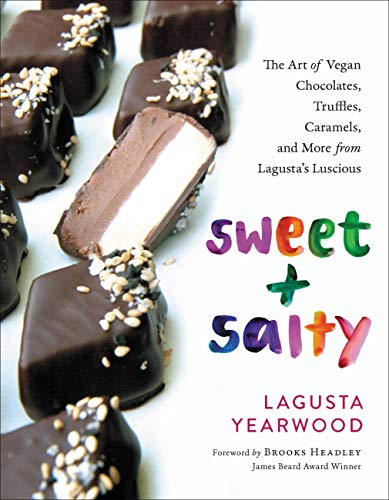 Perhaps you have heard of Lagusta’s Luscious in New York, which apparently was the first vegan chocolate shop in the world?? Instead of keeping the secret to her very popular vegan sweets all to herself, Lagusta Yearwood has generously penned this guide to creating delicious chocolates, caramels, and other sweet and salty goodness. Yearwood walks readers through classics like basic caramel up to and including decadent variations like thyme-preserved lemon sea-salt caramels. There are 100 recipes overall! Lots of details on the how-tos of the recipes are interspersed with writing about Yearwood’s life and the ethics and politics behind the way she makes treats. This cookbook is for the adventurous home cook in your life, not someone vegan necessarily — although that’s a great fit, obviously — but definitely someone who likes to try new things in the kitchen. It’s also for someone who would appreciate a dose of anarchism with their chocolate truffle recipes! 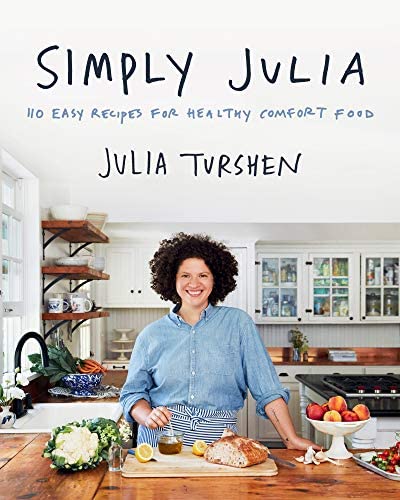 Julia Turshen’s latest cookbook offering is a delightful blend of practical, unfussy, flavorful recipes of mostly general Americana along with some Jewish specialties and Asian dishes inspired by her and her wife’s family’s recipes. She also includes thoughtful essays on topics like the concept of “healthy,” how food is a key part of community, and why food is important nourishment for your soul as well as body. The recipes are divided into thematic sections such as chicken recipes, vegan one-pot meals, “noshes,” make-ahead main dishes, and more. Some of my personal favorite recipes are the potato chip and ricotta fishcakes with peas, sheet pan lamb meatballs with sweet and sour eggplant, and the any frozen fruit and cornmeal cobbler. There is also a cake inspired by The L Word’s famous pear polenta tart!! This cookbook is a perfect gift for someone you just came out to or for an older and/or conservative relative who is a bit unsure about the whole gay thing. Get them acclimatized to lesbianism by giving them this cookbook full of wholesome photos of Julia Turshen and her wife volunteering and hanging out with their dog. 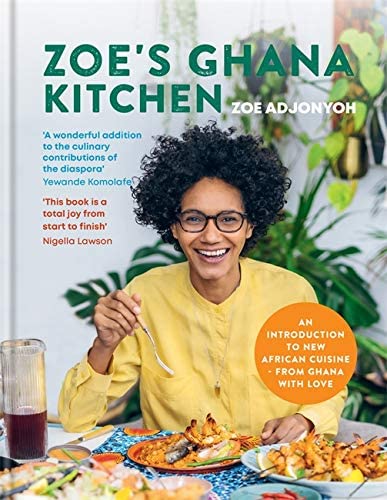 First famous as a pop-up restaurant in the U.K., Zoe’s Ghana Kitchen is now available in cookbook form in North America! Adjonyoh’s recipes are traditional Ghanian with modern twists: coconut and cassava cake; Nkruma (okra) tempura; jollof fried chicken; vegan hotpot of groundnuts with sweet potatoes and yam; red snapper croquettes with Gari crumb and shito mayo; crunchy and crisp apple and scotch bonnet slaw; red red stew (“so good they named it twice,” says Adjonyoh) and more. Check out their insta page for more descriptions and photos of the dishes. Along with the food, Adjonyoh shares stories about Ghana — its people, markets, cuisine, and culture — and herself, particularly how food traditions have shaped her identity. Not only is this book full of mouthwatering recipes, it also features beautiful, colorful photos that make it equally interesting as a coffee table book to browse for the images alone. Buy this for the person on your list who would appreciate a cookbook that doubles as a piece of art!

Coconuts and Collards by Von Diaz ($28) 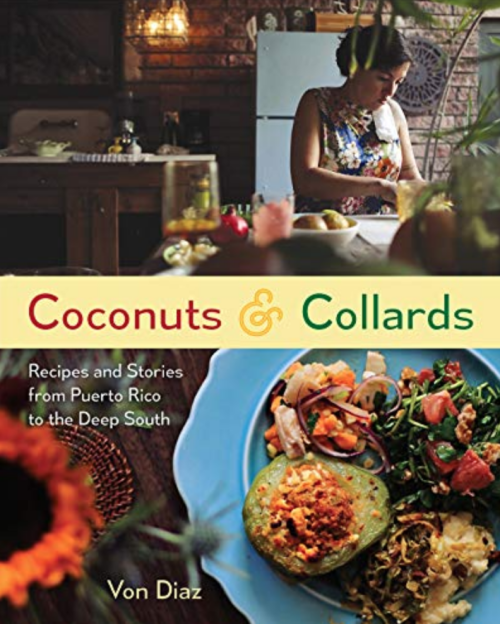 The concept of Coconuts and Collards is inspired by Von Diaz’s family’s move from Rio Piedras, Puerto Rico to Atlanta, Georgia. A big part of the adjustment was learning to appreciate corn grits and sweet tea after cutting her teeth on fried plantains and Malta Goya. Part memoir that recounts growing up Latina in the South, the book focuses on the women in Von Diaz’s family, including herself. As a kid, she started cooking for her younger siblings and her single mom, who worked two jobs. She learnt from her grandmother about traditional Puerto Rican cooking techniques and flavors. From this hybrid culinary background, the recipes in Coconuts and Collards emerge: drinks like Sofrito Bloody Marys and Anticaudos (Old-fashioneds made with rum); sides like funche / grits with coconut milk and quingombo / stewed okra; mains like pastelón / shepherd’s pie with plantains and pinchos de pollo / chicken skewers with guava bbq sauce. And don’t forget desserts like besitos de coco / coconut kisses! Do you have a Southerner or a Puerto Rican on your list? Buy this for them so they can experiment with a little fusion cuisine! In fact, gift Coconuts and Collards to anyone interested in mixing cultural food traditions, or a reader who loves a good genre hybrid of memoir and cookbook. 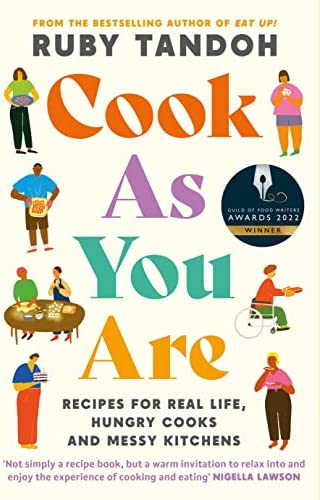 Just out in North America this month, U.K.-based chef Ruby Tandoh’s latest cookbook is billed explicitly as an inclusive, accessible collection of recipes, with many cultural influences. The intended audience? Messy, busy, hungry, real people! Meeting home cooks where they are, she includes plenty of substitution ideas (including dietary restrictions like gluten-free and vegetarian), tips for making meals ahead, techniques for cooks with sensory and/or mobility issues, indexes for quick or low prep/chop recipes, clear detailed instructions, adaptability for different budgets, and more! Tandoh’s sense of shared humanity, compassion, lack of judgment and emphasis on equity are at the forefront here. The recipes are sorted by mood in chapters like “Feed Me Now,” “More Food, Less Work,” and “Wild Appetites.” Examples of the eclectic recipes include: a smoky eggplant stew; salted malted magic ice cream; one tin smashed potatoes with lemony sardines and pesto; and molten chocolate, olive oil, and rosemary cookie pie. There is no expertly lighted food photography, just fun, charming illustrations throughout the book, highlighting the idea of different cooks in realistic kitchens. People cook in kitchens with fridges covered in kids’ drawings, kitchens that are also dining rooms, with pets hanging around, coats hanging on the back of chairs, all of it! Except perhaps for someone who only likes cooking elaborate meals for 20 guests in their meticulously clean kitchen, this cookbook is truly for everyone. 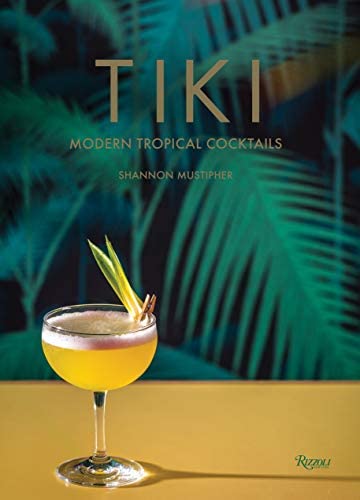 Have you got a burgeoning mixologist on your holiday shopping list? Look no further than Tiki, the first cocktail book published by a major press and written by a working Black bartender in over 100 years. Rum and cane spirits expert Shannon Mustipher shares not only her original, gorgeous recipes, but also drink mixing tips and techniques, tasting notes and recommendations for different types of spirits, and suggestions for style and accompanying music. In other words: here is everything you need for your home tiki bar experience! There are over 90 recipes, including ones contributed by other tiki cocktail experts like Nathan Hazard, Brother Cleve, Laura Bishop, and Ean Bancroft. Some examples of Mustipher’s unique delicious recipes include the Tigershark: coconut oil-washed bourbon, lemongrass syrup, falernum, Angostura bitters, and lime juice; and Mutiny on the Bounty; Jamaican rum, Darjeeling-infused gin, spiced syrup, tangerine juice, and lime juice. The book includes instructions on how to make ingredients like coconut oil-washed bourbon, Darjeeling-infused gin, and spiced syrup.

For your at-home bartender friends who are tired of getting their mixology lessons from straight white dudes, Tiki is just the thing. Bask in the book’s lush photos of a masc Black woman behind the bar — while sipping one of her delightful cocktails, of course. Pairs well with Drink Masters on Netflix! 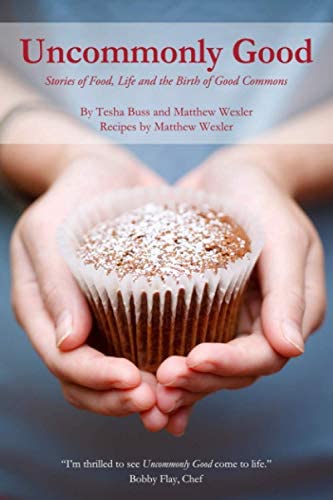 Subtitled “stories of food, life, and the birth of Good Commons,” this memoir cookbook hybrid follows the narrative of its authors to creating their Vermont retreat center. The two business partners started their friendship in New York City, where they were both struggling artists. Eventually, Buss left the city and bought an old Vermont farmhouse, which she and Wexler then turned into the destination it is today. Wexler, the chef in residence, shares over 75 practical farm-to-table recipes that have made the Good Commons famous as much for its culinary delights as for its offerings as a wellness center. The recipes draw on Wexler’s Midwestern upbringing, as well as his training from the French Culinary Institute. Highlights in the recipe section include beef bourguignon shepherd’s pie, shrimp and plum ceviche, eggplant rollatini, midnight fudge, and more. Uncommonly Good would be a great present for someone who’s thinking of starting their own business. Buss and Wexler share the trials and tribulations of making Good Commons work, as well as their successes and joys. 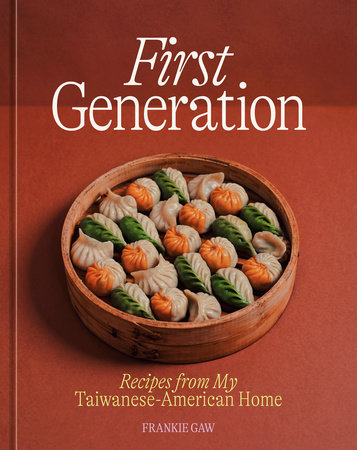 Known as the food blogger Little Fat Boy, Frankie Gaw’s debut cookbook shares recipes rooted in his childhood in the Midwest as a gay Taiwanese American kid. Walking readers through his recipes step by step with photographs as well as illustrations, Gaw introduces savory fusion dishes like Lap Cheong Corn Dogs, Stir-Fried Rice Cakes with Bolognese, Cincinnati Chili with Hand Pulled Noodles, and Bao Egg and Soy Glazed Bacon Sandwich. The recipes are deeply personal, drawn from his experiences growing up in suburban America while learning Taiwanese cuisine and cooking techniques passed down through his family. (Although he admits some of the recipes “will probably make [his] ancestors pass out.”) As you can see, Gaw includes traditional Taiwanese elements like hand pulled noodles alongside American “junk food” staples like corn dogs. There’s a nostalgic vibe to both. The dessert section is perhaps the most nostalgic, at least for those of us who grew up on sugary cereals. Almost every dessert uses classic boxed cereal. For example: Cinnamon Toast Crunch Butter Mochi! Gift this cookbook not only for someone who has an appreciation for both dumplings and Reese’s peanut butter puffs, but anyone who likes a good laugh. Gaw is very funny.

Want even more queer cookbook suggestions? Check out this list Reneice wrote for Autostraddle a few years back!