The following review of Netflix’s Drink Masters includes some spoilers through episode four.

Drink Masters — a mixology competition series from Netflix — pits a dozen bartenders against each other for the title of “ultimate drink master” and a gargantuan $100,000 cash prize. Hosted by comedian Tone Bell and judged by Clover Club’s Julie Reiner and Frankie Solarik of Toronto’s Bar Chef, the ten-episode boozy throwdown presents new challenges in every episode, calling upon these cocktail maestros to be innovative, improvisational, and layered in their approaches to mixology.

It’s a deeply satisfying competition series, the challenges distinct from episode-to-episode in a way that calls to mind the simultaneous chaos/unpredictability as well as repetition of bar life. Take, for example, the very first challenge, which asks the contestants to make margaritas. They have to put little spins and twists on those margaritas (the chaos factor) but also not deviate too far from the concept of a standard margarita — tequila, orange liqueur, lime — to the point it’s not recognizable as a margarita (repetition!). The bartenders of Drink Masters are constantly asked to follow rules and also break them. It makes for exciting challenges and a lot of variability. I wanted to taste everything.

Mixology entails a lot more than just drink-mixing. There’s science, gastronomy, artistry, and even storytelling involved here. And Drink Masters understands this alchemy well, often demanding the contestants not just make drinks but also craft narratives and make bites to go with those drinks. They have to be chefs, bartenders, and storytellers all at once. Like a well balanced drink, there are so many layers to the creations they concoct, so much attention paid to details such as presentation, glassware, color, aromatics, and more.

I have, as an immediate result, started doing some drinkable experimentations of my own in the kitchen. But I’ll tell you about those another day. For now, I want to tell you about all the queer tasting notes to Drink Masters.

There are several queer contestants on the show, including Meredith Barry, who makes her gayness known right away by confessing to a crush on judge Julie. She’s the co-owner of the St. Louis neighborhood bar Platypus. She’s immediately infectious behind the bar, serving up a saffron-infused take on a margarita in the first episode.

In episode three, the contestants do their first paired challenge, teaming up into groups of two and tasked with focusing on botanicals in their drinks. Meredith is paired with Suzu Orellana, another queer bartender in the competition.

“We’re kind of going on an inspiration of going to 90s gay bars and the 90s martini,” Meredith says of Team Meredith/Suzu’s gin and vodka split martini with tomato, strawberry, and hibiscus water.

“We have just meshed really well together, and we’re both queer, so it’s just kind of like double trouble.”

While they don’t do great in the challenge, that queer collaboration and chemistry is so fun to watch. And even if they don’t stick the landing on the execution here, the underlying narrative is reflective of exactly what I love about this show. They’re riffing on the martinis drank in gay bars in the 90s, tapping into tradition and shared history but also putting their own twist on it. Creativity in the ingredients is matched by creativity in the storytelling. That just feels so gay to me!

While some of the other contestants didn’t necessarily talk about sexuality on the show, as soon as I finished watching, I of course looked everyone up on Instagram. Contestant Kate Gerwin — owner of Happy Accidents in Albuquerque and one of the older bartenders in the competition as well as the only parent — recently posted about pansexual pride.

Montreal-based cocktail consultant Tao’s Instagram bio includes the title “Genderless Fashion Icon.” Indeed, Tao’s attention to aesthetic details can be seen not only in drinks but in literal fashion throughout the series.

The dirty dozen also includes TWO D.C. bartenders — LP and Kapri Robinson — and anyone who knows even a little bit about the scene knows that D.C.’s cocktail and nightlife world is very queer. LP wrote about navigating her sexuality on Instagram and also includes in her Instagram that she’s a low- and no-ABV enthusiast. I’m super interested in the no-ABV movement (which really is just a fancy way of saying “mocktails”) within mixology, and when Kate and LP team up for the botanical paired challenge, they end up making an alcohol-free imitation gin from juniper. The judges don’t scoff this off as something that doesn’t belong in a mixology competition; they see it as a smart choice reflective of recent trends in the industry. Now feels like a good time to say that while cocktail culture is indeed a very queer space and there are a lot of LGBTQ+ folks who work in nightlife, bars, and the mixology realm, there are also a lot of sober queer folks and not drinking alcohol doesn’t make you any less gay! And making bars truly inclusive goes beyond accommodations for accessibility and things like gender neutral restrooms; truly inclusive bars have options for sober people other than just water.

As for the second D.C. bartender Kapri, I’m unsure if she’s queer, but she is involved in some very cool projects, including being the founder of Chocolate City’s Best, a nonprofit that connects and supports Black and brown folks in the food and beverage industry. She also co-founded Empowering the Diner — a Black-led food and bev events company — alongside queer Black sommelier Erica Christian.

In an episode all about spice, queer Black cocktail icon Tiffanie Barriere of Atlanta’s One Flew South appeared as a guest judge, challenging the remaining contestants to make spicy drinks. The Cosmopolitan — arguably the cocktail most often tied up in discussions of queer history — also gets spotlit in one episode when Dale DeGroff guest judges. (He’s not the inventor of the drink, whose origins are hotly contested and full of almost myth-like wonder and mystery much like a lot of cocktail history, but he did widely popularize the drink in its most modern form.)

Anyway, I don’t want to say too much more, because I don’t want to spoil too much for anyone who hasn’t had a chance to imbibe yet. Whether you like cocktails or just like the theatrics and storytelling of food and beverage, it’s a highly watchable competition show. It’s a little more acidic and cutthroat than the Bake Offs of the world, but genuine friendships are forged, and every contestant has their little charms. 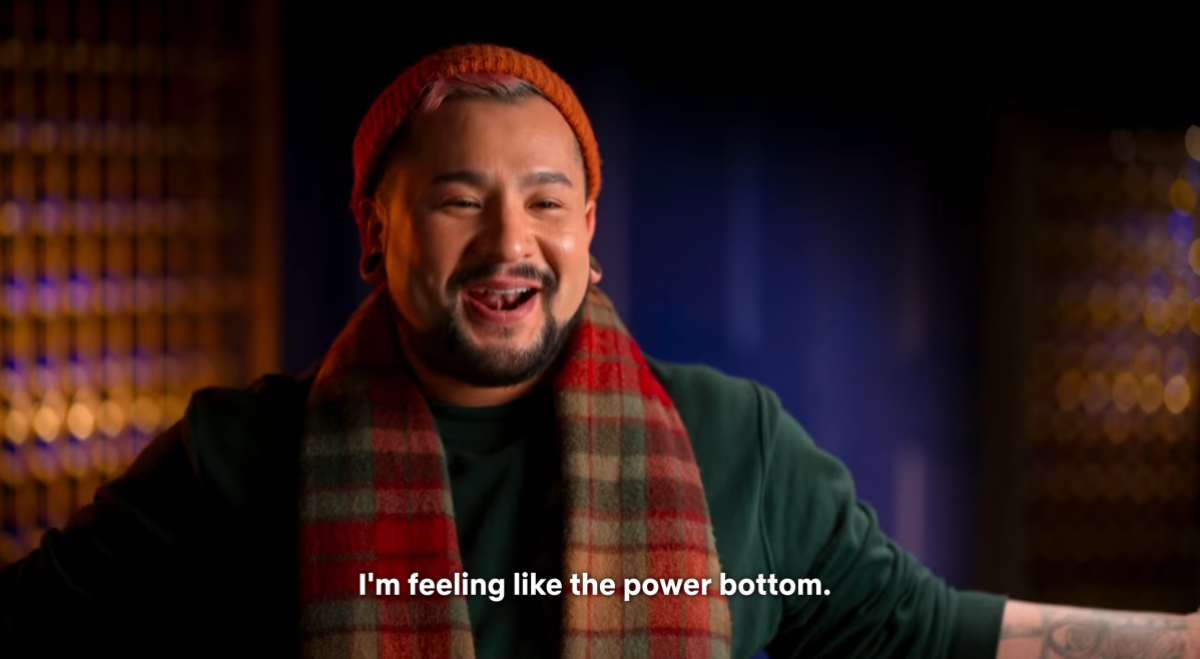