I should have put on some eyeliner this morning. That’s the thought racing through my mind as I wait for the doctor to see me. The waiting room is sparse and dingy; about what you’d expect from a clinic located in a Hollywood strip mall. The hard plastic chair holds firm despite my attempts to slouch comfortably. I’ve always felt nervous and uncomfortable around doctors, and this time is no different. I make brief eye contact with the other patients, then quickly look away. I have a knot in my stomach, like a kid waiting outside the principal’s office. But I’m not a kid, and this is not a principal’s office. I’m an adult in the great state of California waiting to get her medical marijuana card.

California is just one of twenty states (and D.C.) that has legalized medical marijuana. It was the first state to do so, in 1996 with the passing of Proposition 215, the California Compassionate Use Act. The proposition was championed by Dennis Peron, a contemporary of Harvey Milk, whose partner Jonathan West was using marijuana to ease the symptoms of AIDS. Two prior legalization bills had passed in state congress, but both were vetoed by California governor Pete Wilson. Despite these setbacks, Proposition 215 passed with barely 56% of the vote, and legalized medical marijuana became a reality in California.

It would almost feel like a normal waiting room, were it not for the tiny security cameras placed on all the walls. Now I definitely feel like I’m in trouble. I snap back to reality as a young guy in scrubs reads my name off a clip board. I follow him back to his office, where he checks my vitals: blood pressure, temperature, a round with the stethoscope. He hands me five pages of medical warnings and side effects that I need to initial, both to warn me and to indemnify him. Everything from “dry mouth”, to “confusion”, to my favorite: “feelings of euphoria”. Sign me up! Granted, there are more ominous side effects on the list, but most of them pale in comparison to the warning labels that appear on prescription drugs. I once took an acne medication that had the potential to cause severe birth defects, and featured an image of an alien-looking fetus on every packet. VERY upsetting for a teenage, acne-riddled virgin such as myself. But I digress.

The paperwork I sign also reminds me that marijuana, even for medical purposes, is illegal under federal law. And if I had a job that required drug testing (like many government jobs do), my employer would be well within their rights not to hire me for a positive drug test. This would be a big problem if I worked for the government or any federal agency. However, since I’m an underemployed writer/marijuana blogger, this is a non-issue. This is only my fourth column, but so far Riese hasn’t asked me to pee in a cup. Yet.

The doctor is soft spoken, with a light accent. He is friendly, but he looks tired. He tells me that his practice is all about working towards legalizing marijuana for everybody. He tells me to stay out of trouble: only smoke indoors, no smoking while driving, and no drinking or mixing other drugs with marijuana. He repeats these three rules several times; I get the feeling he says this a lot.

I look over the lengthy list of ailments: everything from chronic pain to anxiety to migraines, not to mention more serious ailments. Initially, I felt like a fraud sitting in that waiting room. There is nothing seriously wrong with me. Like many aimless twenty-somethings, I wanted the weed card purely for recreational smoking. I wanted the convenience and the higher quality of medical weed. I wanted to smoke carefully measured marijuana dispensed in little orange plastic pill bottles. But as I go over the list, I realize there’s nothing to fake. I suffer from a few items on the list. Have I been unknowingly self-medicating for years? There is nothing seriously wrong with me. But there’s nothing seriously right with me either.

The doctor tells me to fax him some medical information, and asks me to call into the office every 30 days to check in. I’m sure there’s some legal reason for this, but I can’t help but feel like it’s kind of sweet. They usher me into another room, where my photo is taken for my medical ID card. I think about the eyeliner I forgot to wear, and hope that my picture isn’t too terrible. Seventy bucks later and I’m out the door, ID card and certificate in hand. I am now a card-carrying medical marijuana patient. 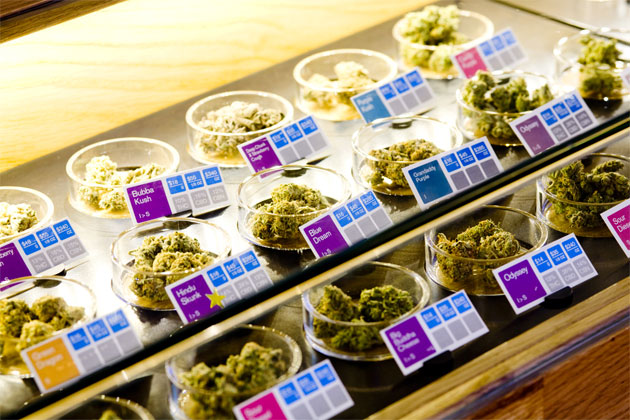 Thirty days later, I get a phone call from the doctor. He asks me how I’m doing. I briefly consider saying, “still stoned, thanks for asking!” but I settle with a “fine.” He genuinely seems pleased to hear it. And surprisingly, I’m pleased to say it.