A lot of people tease me about the fact that I can’t cook, but lately I have been trying to get better at it. The only problem: I’m both really lazy and usually broke. I rarely have time or energy to go shopping for ingredients and when I do, I usually don’t have enough money to buy everything for a particular recipe I see. Even supposedly “cheap” ones often require you to shell up a lot upfront for an ingredient you’re not sure if you’ll get to use with anything else. Really, not enough websites or cookbooks have absorbed the idea that “easy/quick stuff for beginning cooks” and “cheap stuff that doesn’t require a lot of ingredients because you’re broke” are categories that should nearly always overlap, since beginner cooks are often broke 20-something students like me.

That is, until a browse through my dash on Tumblr (the wellspring of all ridiculously awesome Internet things) introduced me to Supercook, a website that’s especially made for people like me. Why? Because you can search for recipes all over the web by ingredient. That’s right: just plug in what’s already in your refrigerator or pantry and it will spit out a recipe you can make RIGHT NOW! No extra trip to the grocery store needed.

And you don’t even need a lot to generate a recipe. All I had to enter was “eggs” and “white vinegar” and behold: 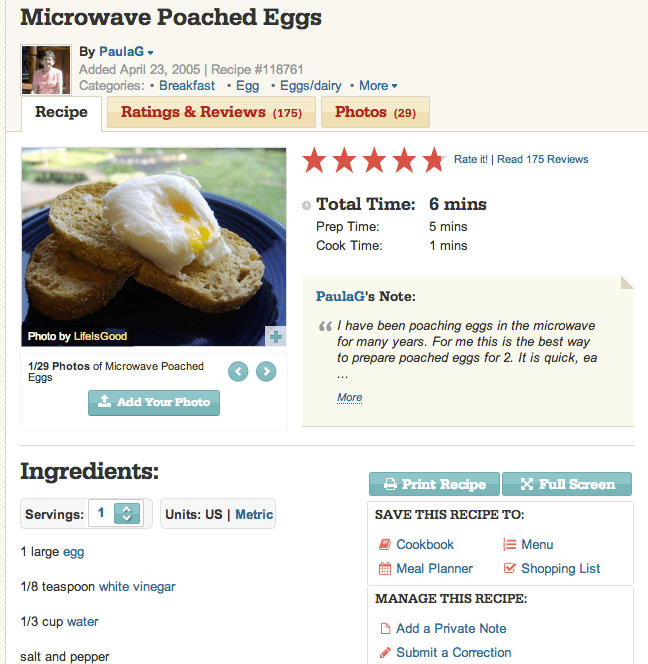 This recipe via food.com

Who knew you could make a perfect poached egg in your microwave? And now, making these and spreading them on toast with some salt, pepper and sriracha is my go-to easy breakfast “recipe.”

It’s as simple as merely typing your ingredients into the search bar. You can add as many as you want, just to see what combinations of them it will yield. It usually doesn’t include all of them at once if you have more than a few ingredients, so it’s a good idea to add as many as possible: 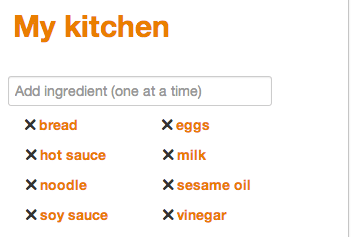 Yeah, my refrigerator is a strange place

If you are up to buying one more thing – or maybe forgot to list something already in your pantry – the site will give you some suggestions for ones to add for more recipes:

So if you’re cooking on a budget and sick of having to pore through cookbooks that always expect you to buy one more thing that you know you’ll never use again, Supercook will help you choose your own, affordable cooking adventure. Bon appétit!