It’s no secret that I have a bit of a thing for civic engagement. Which is why I’m gonna be participating in something called Big Block of Cheese Day. And I think you should participate too.

In 1837, President Jackson hosted an open house where average Americans could come on in and talk with White House staff and cabinet members about their issues. This open house feature a 1,400-pound block of cheese that hung out in the main foyer, ready to be happily consumed by the thousands of Americans who came to chat and ask questions.

In case you aren’t also obsessed with this particular TV show, The Big Block of Cheese Day was popularized by The West Wing — that’s why two actors from that show happen to be in the video. But I digress.

The White House is taking to social media (Facebook, Twitter, Tumblr, Instagram and Google+ hangout) so Americans can ask questions to dozens of White House officials. There will not be any real cheese, unfortunately (you could grab some of your own while you’re asking and reading responses, I suppose). But there will be ample opportunity to ask whatever is on your mind, and that virtual Big Block of Cheese Day is this Wednesday, January 29th. The full schedule will be announced at the end of the State of the Union (this evening at 9 pm EST), but you can already start asking questions with the hashtag #ASKTHEWH. 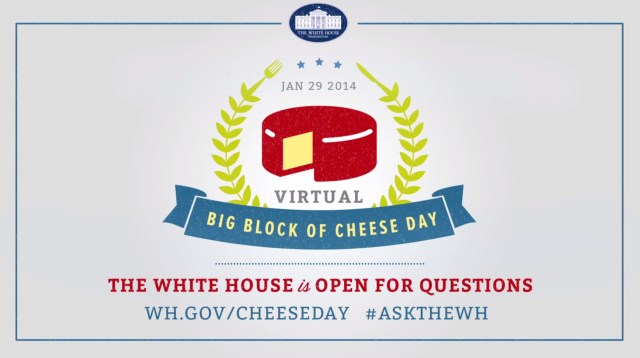 The reason I think y’all in particular need to know this is happening is because the queer community, specifically the Autostraddle community, is made up of the smartest, most empathetic and most socially engaged group of people that I know. Decisions are made by those who show up, and while not all of us have the capacity, the desire or both to serve in the US government, we can ask questions and make our voices heard. This is one way to do it. This is one way to show up, albeit virtually. I’d prefer it if as many of the people who show up to things like this as possible are people like you.