There comes a time in the lives of many young, married couples when their thoughts turn to starting a family. Then, assuming that they’re a queer couple without access to home brewed semen, they find out about the laws relating to artificial insemination and instead construct a fort out of pillows and back issues of The Advocate, never to emerge again.

Did you guys know that in many states, if a physician doesn’t conduct the insemination, then the parental rights of the sperm donor might not be terminated? This legal loophole has recently been used against a lesbian couple in New Jersey, whose sperm donor is suing for parental rights despite having signed a contract giving up these rights, and a sperm donor in Kansas, who may be forced to pay child support after providing sperm to a lesbian couple. (See? These laws hurt everybody — even straight guys attempting to share their sperm with lesbians through the magic of Craigslist!)

Perhaps my wife and I are more naïve about the legal system than your average queer dyad, but when we first read about the New Jersey case we were pretty much gobsmacked. We’re not planning to become parents for another couple years or so, but in the meantime we’ve been saving money in a baby fund, discussing the pros and cons of adoption vs artificial insemination, and generally preparing the way for us to start a family. We’ve also thought a fair bit about the ways in which doing so might be complicated by the state we land in after my wife starts on her PhD (she’s currently working towards a MS in entomology). But our rule of thumb had always been blue state=good, red state=bad — that is until we read about the couple in New Jersey. Although we’d likely have gone through a sperm bank rather than using a known donor, we’d certainly never planned to inseminate inside a sterile doctor’s office. And frankly, even if we take all the precautions necessary to avoid this particular problem, it’s been more than a little terrifying to consider all the other things we might not know about the way the law will treat our family.

The presence or absence of a physician may seem arbitrary now, but most of these laws date back to a time when lesbians inseminating at home as a couple simply wasn’t on the cultural radar. The standard text, which is found in many of these older statutes, reads:

“If, under the supervision of a licensed physician and with the consent of her husband, a wife is inseminated artificially with semen donated by a man not her husband, the husband is treated in law as if he were the biological father of a child thereby conceived. The husband’s consent must be in writing and signed by him and his wife. The consent must be retained by the physician for at least four years after the confirmation of a pregnancy that occurs during the process of artificial insemination.”

There’s an awful lot to be worried about with that wording. In addition to relying on the presence of a physician, it goes on to assume the existence of a “husband” to whom the rights and responsibilities of fatherhood are transferred. Still, that doesn’t mean it’s the worst that’s out there — in South Carolina sperm donors are actively encouraged to claim paternity through something called the Responsible Father Registry, and in Georgia (and possibly in other states as well, according to Beth Littrell at Lambda Legal who I spoke to for this story), anyone other than a doctor who conducts an insemination may be guilty of a felony. Littrell went on to emphasize that even in states where a physician’s presence is not required in the law, heavily gendered language is often present which may complicate the situation of same-sex couples. Lambda Legal is currently pushing for gender neutral interpretations of the laws, but as things stand the legal status of married same-sex couples is not settled. 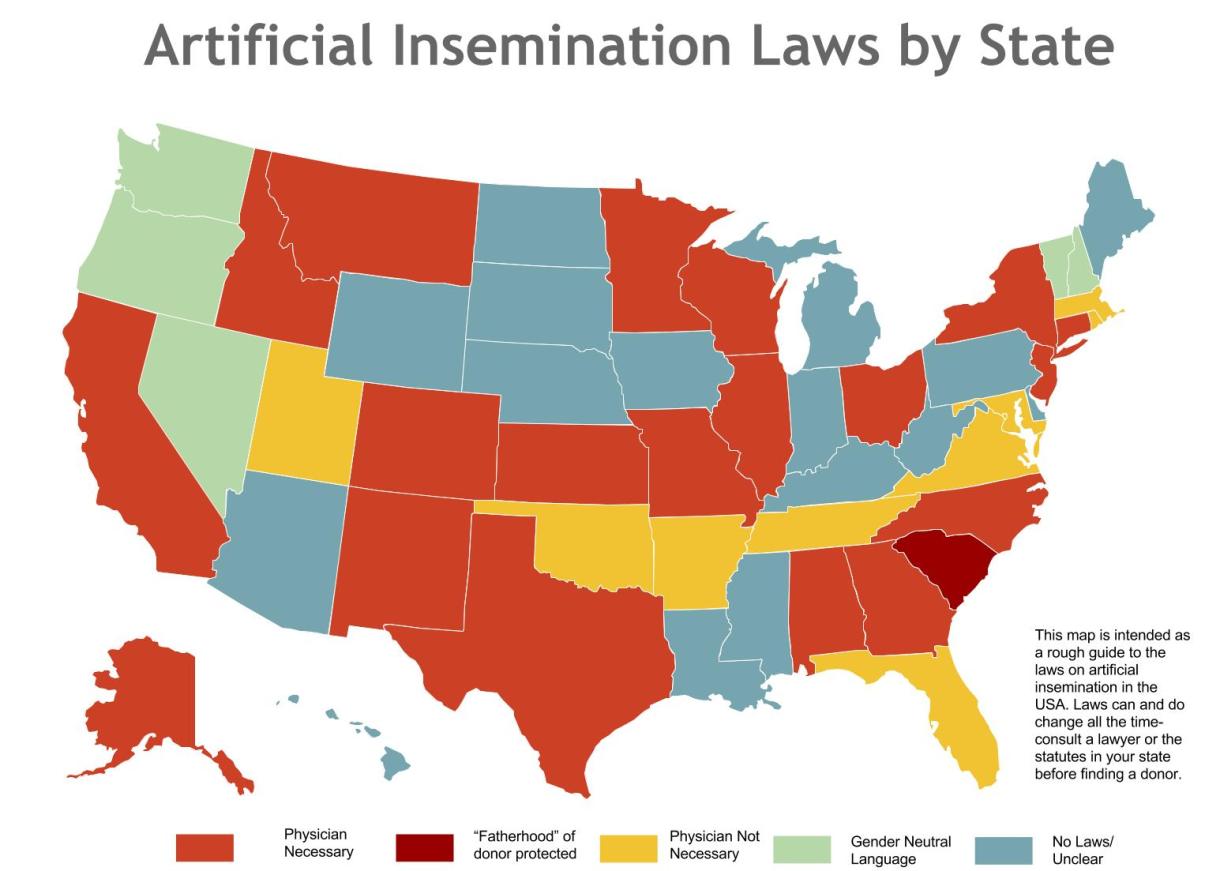 By Vanessa Vitiello Urquhart for Autostraddle

In all, there are twenty states who’s laws require a physician to conduct an insemination before the donor’s rights to be terminated, (although in some of these this loophole hasn’t been enough for a court to grant paternity to a sperm donor). In a further nine states the language of the law relies on gendered terms like “husband “ and “father”, and in many other states there are no laws dealing with the paternity of donors in the first place. In fact, there are only five states where gender neutral language exists to protect the rights of queer couples seeking to conceive with donor sperm (these are New Hampshire, Vermont, Nevada, Washington, and Oregon).

Most of these laws shouldn’t have any bearing on couples that locate an anonymous donor through a licensed sperm bank — such facilities have mechanisms that protect both the donor and prospective parent(s) from unwanted legal complications. Unfortunately this means it disproportionately disadvantages lower income folks, who may try to find their own donor and eschew involving a physician to keep the cost down. It’s also really hard on couples who’d like to get to know their donor personally before inseminating, many of whom would rather conduct the insemination in a more intimate setting than a doctor’s office.

If same-sex marriage becomes the law of the land, then there’s an excellent chance that gendered language for married couples won’t withstand a challenge in a federal court, especially with attorneys like Littrell fighting for the good guys. But the requirement that a physician be the one to perform insemination is a trickier animal, one that will require sustained advocacy at the state level to ensure that better laws are written. Ideally, these laws would balance the rights of queer couples (and single parents), with the protection of children and the rights of fathers who do not wish to terminate their rights, to arrive at a clear and equitable legal framework for all parents. For anyone who thought their rights would be fully protected once the reach of same-sex marriage went everywhere, bad news —the struggle for equality under the law continues.

Vanessa is a regular contributor to Slate's Outward blog and a self-proclaimed butch lesbian icon. You can find samples of her work for Slate on her author page.

V has written 1 article for us.