dapperQ, a style website for the unconventionally masculine, shot our last two He Said/We Said series in San Fran and Portland to capture all the dapperness that exists outside of our insular NYC universe. For our 13th edition, we’ve returned home to the West Village, shooting on the streets surrounding the historic Stonewall bar; we even shot on “Gay Street.” 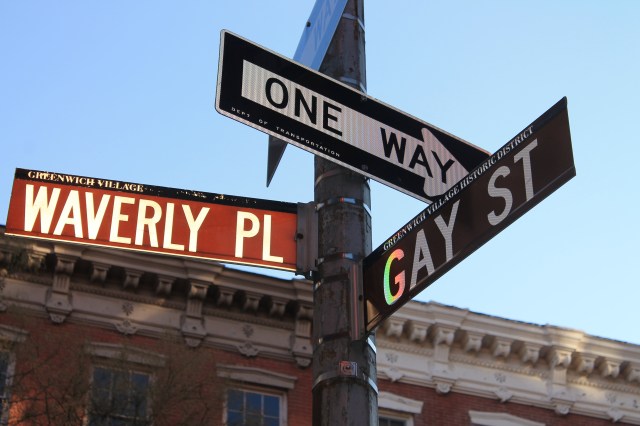 For a quick refresher on the series, check out creatress mastermind Anita Dolce Vita’s plan
behind the HS/WS magic:

“The models fashion their very own looks – I give the inspiration, they give the interpretation.They come to the shoot camera ready: hair, make-up, their own clothes, accessories and props. I didn’t want the series to reflect how to recreate menswear from an individual stylist’s point of view. It’s always a wonderful surprise to see what each model came up with and all of the different translations of the same inspiration.”

Photographer Gizelle Peters, along with Anita Dolce Vita, selected a Bespoken menswear
collection as the inspiration. Here’s what Gizelle said about why the Bespoken collection inspired her and what it meant on a personal level to capture images for the He Said/We Said series:

“I chose the BESPOKEN collection because it spoke to me; it had a lot of dark navy blues and grays, which I incorporate into my own personal style. With this dapperQ shoot being a summer edition, I loved the pops of color that were in the accessories and the different colored pants/shorts, which were beautifully paired with the darker pieces.

I chose the West Village because as an artist, I have always been inspired by its beautiful doors, small and quaint streets and beautiful greenery. I thought that whatever the models would choose — in regards to their outfits — would look beautiful against and with everything I find most beautiful about the village.

Most people know me and my work from the parties I shoot, such as Hot Rabbit… but what I feel people don’t know is that my love for photography and hobby stretches way past that. With such busy schedules and working to pay rent and other things to live in this city, it can be sometimes hard to find time for my own personal work, so working with these models and shooting these portraits for dapperQ was incredibly inspiring and you can be sure to see more of this work from me. 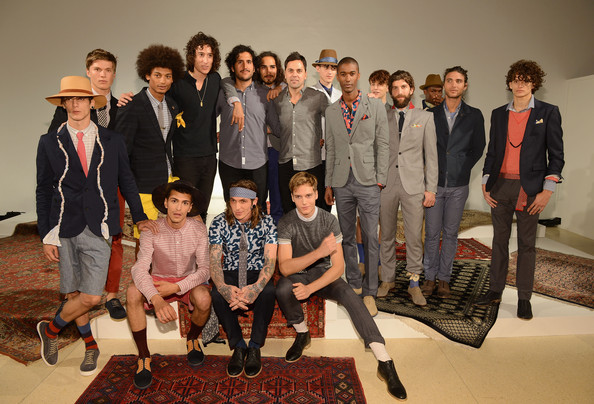 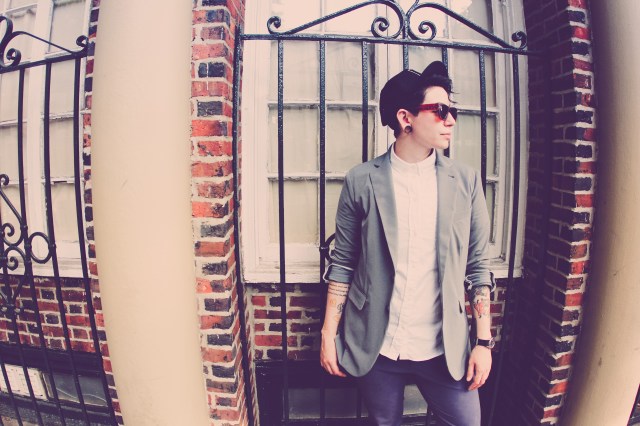 Blazer, shirt, and pants from Outlier. Shoes by Vans.

What is your outfit sobriquet?

When I walked into Monster on Sunday afternoon, I was the first one there for the shoot. I found myself being a gender-nonconforming queer girl floating amidst a sea of older gay men. It wasn’t my most comfortable space, but the bartender was nice and fixed me a strong drink. We saw a whole bunch of nice looking dogs and a beautiful dresser on the curb. Of course I’m also pretty happy every time I see Gay St.

I’m going to have to pick three people. Vybz Kartel & Popcaan have amazing style, I especially like that they have a lot of DIY touches to their looks. I think that how you wear your clothing is more important than what you’re wearing; you have to put your personality into it. That said, I want all of their clothes. I’m also gonna pick Michael Pitt, I can’t tell if it’s the clothes he wears or just that I want to look like him in the clothes he wears… I also can’t deny Ace Rothstein from Casino has some choice threads and glasses.

Without question it would be my binder. I can live without just about anything else as far as clothing, but lemme tell ya, I’ve got some big ol’ boobies that I’m not really into showing off or being a part of my look… 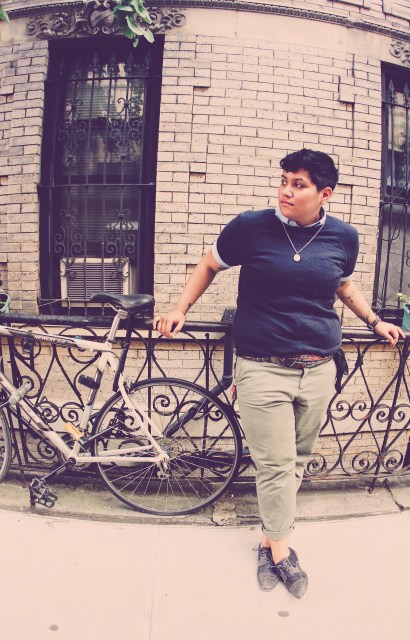 Sunglasses from one of those stores on St. Marks. Anchor locket from Etsy. Men’s T-shirt sweatshirt on sale from Uniqlo. Men’s short sleeve button-up from Uniqlo. Women’s Kahkis from Gap. Men’s Oxford shoes from Steve Madden. Watch was borrowed from my partner. Scarf-belt also borrowed from my partner…I consistently think about stealing it for my own!

What song best describes your look?

“Jump In” by ANGI3 because I’d probably wear most of this outfit on a date!

What does it mean for you on a personal level to be involved in a project like He Said/We Said?

The fact that this is deliberately showing a way to style “men’s” clothing on non-cisgender-man’s body shows that fashion is fluid. “Women’s” fashion only shows skinny ladies wearing skinny lady clothes and “men’s” fashion shows super buff/fit or skinny guys. So there’s that. And then “androgynous” clothing makes me seethe with irritation. It’s actually just skinny women in clothes cut slightly too big to emulate men’s clothes. So I love that He Said/We Said works to give examples of ways to combine different clothing styles off-the-rack of the two available genders to tailor to your own personal body and style.

Silk scarves! Big ol’ square ones that you can wear multiple ways. I love the fact that you can use them to make your T-shirt look a little more deliberately stylish or your button up a little less buttoned up or as a belt or if you have enough hair, to wear there. So many options! So pretty! 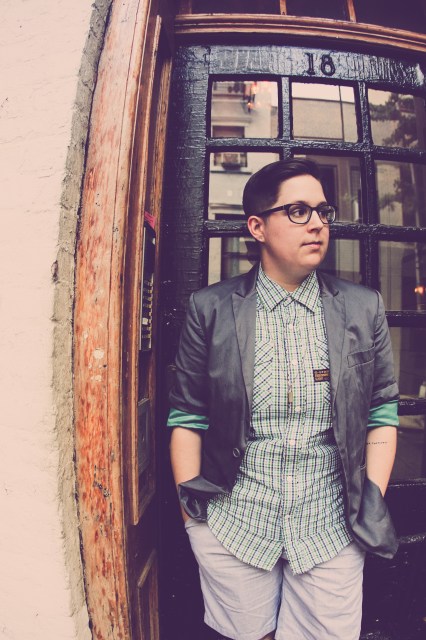 Preferred gender pronoun: She/Her, but I don’t mind any of the others
Occupation: Party promoter/Boy Wonder Events/Hot Rabbit
Outfit details:

Eyewear from Artsee. Shirt from G-Star Raw. Jacket from Ben Sherman. Shorts and Shoes by Merona. Jewelry by Wrecords by Monkey, Max Steiner, and Teno.

I don’t shop that often but when I do it’s usually H&M, Levi’s, Uniqlo, NYC artisans, thrift stores like Beacon’s Closet and Buffalo Exchange, and even Target. Target actually has a lot of cheap clothes that are cut to fit bois well believe it or not. I get most of my accessories from the Brooklyn flea and other local artists. And the Army Surplus stores in the West Village have good men’s shoes in smaller sizes that are hard to find elsewhere.

What does it mean for you on a personal level to be involved in a project like He Said/We Said?

The inclusion of masculine-presenting non-male people in fashion is rare, and yet I think we’re a community that pioneers a lot of interesting fashion trends, so it’s a shame and I think dapperQ is highlighting an important niche within our culture that would otherwise go undocumented. We joke about Justin Bieber lesbians, but I think the emergence of that connection was born out of a true surprise at seeing any person in mainstream media who we could say “looks like us” as we, even in LGBTQ media, are so rarely represented. Examples like male model Casey Legler are anecdotally important only as a novelty. So although I’m the bashful type and posing for these photographs had an element of discomfort for me personally, I think the objective is important and I’m honored to be a part of it. 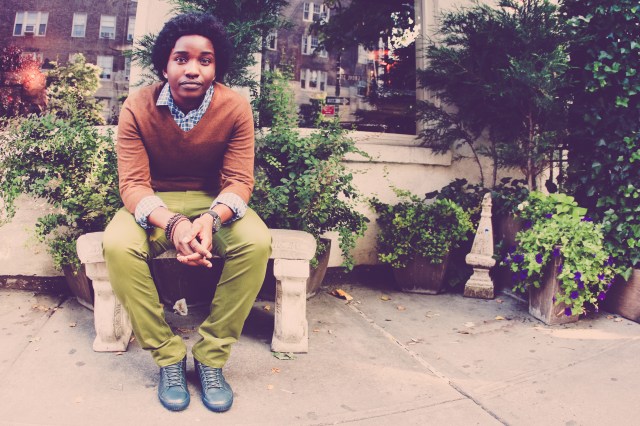 What is your outfit sobriquet?

I’d like to think that my outfit would be called “Mission Accomplished.”

What song best describes your look?

Ryan Leslie’s “Dress To Undress You”

My favorite moment from the shoot was the random male spectator that decided to stop out of curiosity but clearly looked confused as well. He didn’t impose with questions he clearly wanted to ask. I’d like to think that folks will feel that intrigued about the He Said/We Said project.

I can’t live without my graphic t-shirts. They do what a lot of people fail to….say so much without rambling. I think that’s really dope! 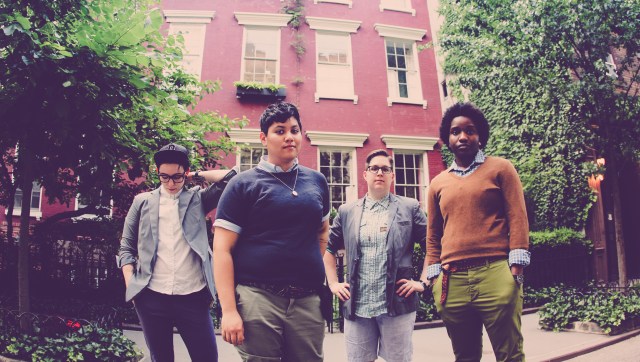 Stay tuned to dapperQ next week for additional images from the shoot!