Ali here: Cheese is so good. It’s so good, I camembert it. I liked cheese before, but then I lived in France and I got super spoiled and particular about my cheese. When you’re Staycationing, a cheese plate is a wonderful thing whether you’re hosting company or you plan to eat that entire board all by your fucking self (I support you in this). But y’all, you wouldn’t believe how many humans I’ve met who approach putting together a cheese plate — and pairing it with wine or other drinks — like it’s nuclear physics. Sure, there are best practices, but y’all. It’s cheese. It’s hard to fail.

The Basics of Getting Your Cheese Together

There are four categories of cheese — Aged, Soft, Firm and Blue. If you’re not sure how to go about setting up your first cheese plate, picking one cheese from each category is a good way to start. It ensures a fairly well-rounded plate that pairs with a lot of different things.

Another way to pick your cheeses is to select those made from the same kind of milk — an all sheep’s milk or all goat’s milk plate are popular options. (We’ve even got an all-goat’s-milk plate further down the page.) Picking a theme can serve to unify your plate and make you less crazy by narrowing down options from “all cheese” to “just these kinds of cheeses.” Doing a tour of a region, a tasting of a particular farm’s cheese, or an exploration of one of the four types of cheese (“Blue Cheese Bonanza,” anyone?) can be good jumping off points. Get down with your bad themes — make an assembly cheese plate where everything can transform into a tiny sandwich, or go with Cheese That Reminds You Of Bette Porter. Go wild! It is your cheese day.

Cheese plates aren’t just cheese, either — you can serve bread, fruit, pickles, nuts, even chocolate! The name of the game here is diversity of texture and flavor. Definitely pick things that you can smear cheese on/put on top of the firmer cheeses. Speaking of pairing…

The Basics of Pairing Cheese With Drinks And Such

Presumably you won’t just be eating this plate — you’ll probably be drinking something with it too. The most popular option is wine and that could be one entire post, just on pairing cheese and wine together. There are cheesy (lol) sayings like “What Grows Together Goes Together,” so if a goat and a grape come from the same area, that goat cheese probably goes well with that wine. Then there are tannins to consider (I like to pair tannic wines with cheese that can be compared to butter: super heavy cheese, warm flavors). But here’s a secret — I cheat. There is a cheat sheet that I use when I don’t want to experiment with a pairing and risk looking like a wine n00b. There are only two things I can definitively say for sure without a cheat sheet when it comes to pairing wines and cheeses:

Speaking of “your choice,” remember how I said Riesling isn’t my fave? To me, even though Riesling is supposed to go with a lot, it’s never going to taste as good to me as, say, a Cabernet Sauvignon. It just isn’t. Which is to say, for me Riesling doesn’t go with everything. That’s what the Golden Rule of Cheese Pairings is about:

Taste is super subjective — and sure, there are people who really fucking know what they’re talking about. It can be fun to try their pairings to see if you agree, but you are not required to acquiesce to the cheese authorities. Damn the man, have your cheese plate. You are the authority on your own taste buds.

That goes for us too — we’re going to give you some example cheese plates to get your noggin inspired, but here’s the thing. You can ignore us. You can ignore us and follow your heart. Or you can do what we did; the following plates are tried and true. 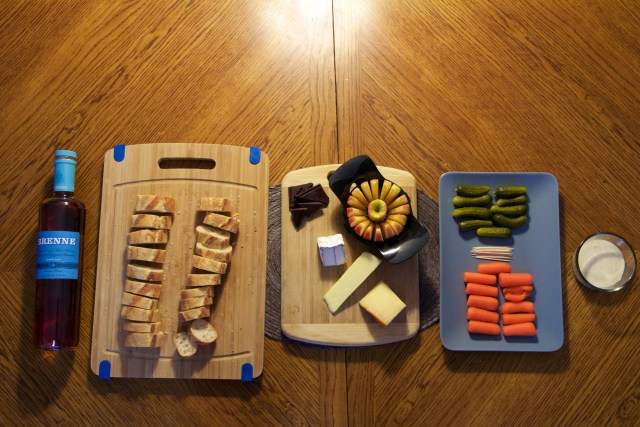 Because sometimes Staycations have to be Working Staycations, which I define as paying more attention to my emotions and stress level than I normally do and treating myself. Treating myself in this case can be defined by the presence of Brenne Whisky during lunch hours. Not something I do often (or ever) because I get tipsy comically quickly, but hey. It’s Sunday (while I’m writing this, at least). I’m writing a novel. I need to treat myself sometimes, because turns out writing a novel is really fucking difficult. This cheese plate is intended for three people all of whom are working on projects at our dining room table and is built to pair nicely with Brenne Whisky, a French single malt on the sweeter side with undertones of Cognac and Bananas. Brenne Whisky, by the way, is a former A-Camp Whiskey Tasting sponsor and we all lost our minds over it.

Pairs well with: Brenne Whiskey, duh. But I also think this would pair well with some medium-bodied red wines and some medium ales. Basically the keyword here is “medium.” 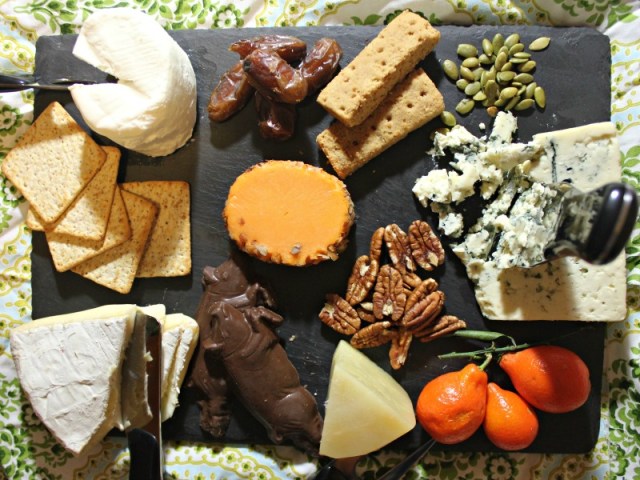 This cheese plate was delicious, obviously, but what was really great about this arrangement was that there were lots of munchies, everything went with everything else, and I remembered to put out multiple cheese knives. My girlfriend and I found this perfect for TV watching, because it ultimately meant less time futzing with the food and more time staring into Rory and Lorelei Gilmore’s beautiful baby blues. Goodness gracious, I do love those girls. 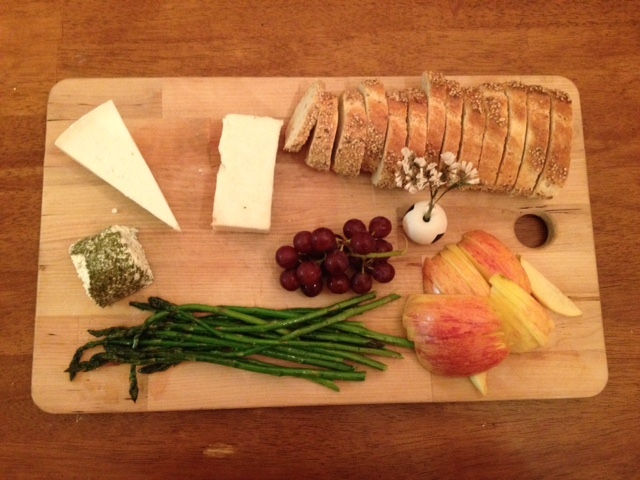 This is a GOAT’S MILK ONLY plate. I visited the fine cheese monger known as Trader Joe, picked his finest [only] cheeses made from goat’s milk. The chevre with herbs was delightfully predictable. The cheddar was sharp, flavorful and much more crumbly than your average cow cheddar. The goat gouda was the surprise favorite: rich, smooth and nice with the apple.

Pairs well with: the cheapest red wine you can find. 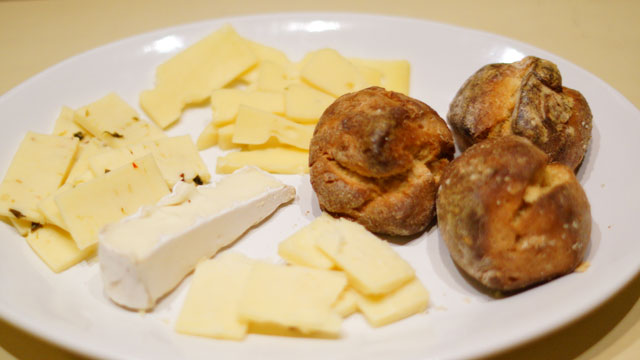 I’ve recently moved into a new house with Skinz, my forever BFF, and a new and amazing and really fancy roommate named Hillary. And everything is white! Like, everything you guys. The hardwood floors are white. The walls are white or soon-to-be-painted white. The furniture has a creamy glaze. The couch is — yep — white. Even her dog is white, which means no matter what color I wear now you can see dog hair on me! Yay!

I made us a cheese plate for our first-ever haus meeting because nobody can be happy without cheese and also, killing two birds with one cheesy stone is my idea of a good time. I totally coincidentally chose a lot of light cheeses and then ate them alongside a Stella Artois, which is so light it’s pretty much clear. What I’m saying here is, the cheese matched the decor matched the drinks: all white everything.

On this cheese plate: 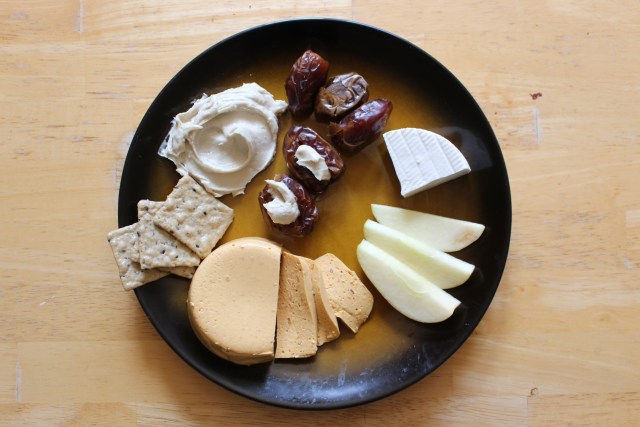 Hello this is your resident vegan speaking. I am a wacko who is super into vegan cheese; I’m not usually crazy about the storebought brands, but I like making and eating cheese-esque situations at home. If you are also into this, I highly recommend Miyoko Schinner’s cookbook on this. I didn’t have time to make any of her recipes this week but they’re pretty sweet. Here’s what I did make: