Davia’s mother shows up on this week’s episode of Good Trouble but it’s not the first time the audience has met her. We were introduced to her early in the series, only we knew her then as “VegLover2” on Instagram. Davia had been featured in a list of top body-positive influencers and the trolls were out, flooding her comments section with their bile. Davia laughs off most of the comments — they’re just closeted chubby chasers, she says — and toasts her haters with a tequila shot, but when VegLover2 chimes in, Davia’s entire demeanor changes.

“If you didn’t put yourself out there like this you wouldn’t be attracting all of this negative attention,” Mariana reads. While Alice proclaims the comment isn’t even mean enough to warrant a shot, it’s the one that elicits an emotional response from Davia. Suddenly, she’s done reading the negative comments and retreats to the Coterie kitchen to grab a bag of chips. She doesn’t respond to VegLover2 — she can’t, it’s her mother — so she redirects her ire at Mariana’s boss, calling him an asshole on Instagram Live… unwittingly getting her new Coterie housemate into trouble at work. Later, Davia apologizes to Mariana, admitting that VegLover2’s comment — her mother’s comment — had her in her feelings.

“Even when I was a kid and I’d get bullied, she’d always ask what I did to deserve it,” Davia confesses. “It doesn’t bother me that she thinks I’m fat, I just wish once in my life she would stand up for me.”

That wish goes unfulfilled again this week when VegLover2 (real name, Bonnie) shows up in LA for another cosmetic procedure. Everything we learned about Davia’s mom in “The Coterie” — her antagonistic relationship with her daughter and how Davia copes with it all — re-emerges in “Unfiltered.”

Bonnie is a lot. She’s consumed with finding a man to take care of her and, because “men aren’t interested on what’s on the inside if what’s on the outside doesn’t give them a boner,” she resorts to cosmetic surgery — that she can’t really afford — to preserve her beauty. During a past visit, she’d flirted shamelessly with Dennis and took him to bed, even though he’s wasted enough that he can’t remember what happened the next morning. Every gift and compliment she offers to her daughter comes with a heaping of scorn. She touts the body that Davia used to have — claiming that you can never be too rich or too skinny — as if that body didn’t lead to Davia to have a full-blown eating disorder. Davia is so pretty and talented, Bonnie says, and if she only lost thirty pounds, she’d be able to get any man she wanted. 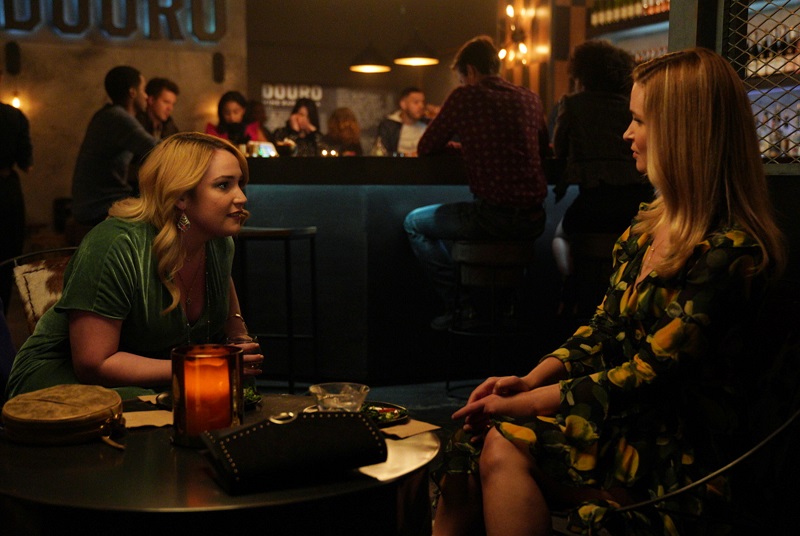 When her mother returns to LA this week for an eyelift, she invites Davia and Dennis out for dinner and drinks at Duoro. Dennis declines the invitation, as Davia anticipated, but he watches as she eats Chinese takeout before her outing, so she won’t be subjected to her mother’s “well meaning” taunts if she eats too much at dinner. And, sure enough, when she sits down with her mother, Davia nurses a drink and orders a kale salad. Without her food choices to criticize, Bonnie opts to talk about Jeff: the news that he left his wife is the talk of Fitchburg and she’s glad that Davia’s finally found someone who loves her for what’s on the inside, as if Jeff couldn’t love Davia for what’s on the inside and outside. She’s finally got “the One.” On this, Davia corrects her mother — she doesn’t think that Jeff’s “the One” anymore and she’s no longer in love with him — but her mother urges her to rethink her decision.

“Davia, you better think long and hard about this,” Bonnie pleads. “You found a good man who wants you and, take it from me, the pickings are slim out there, even for the size twos of the world. Don’t do something you’re gonna regret in ten years when you’re still single and your biological clock is ticking.”

There’s so much that goes unsaid but Davia understands the implication, she’s had to deal with this her entire life. She finally found a man who wants her despite her size, her mother’s really saying. Davia sees through Bonnie’s thinly veiled niceties and hears her mother loud and clear: don’t let this man go, Davia — this man who passed on you once before and cheated on his wife — because what other man would ever want you? But Bonnie doesn’t stop there: after dismissing her daughter’s romantic future, Bonnie mocks her work as a body-positive Instagram influencer. Are these body-positive girls really proud of their bodies, Bonnie wonders aloud, or are they just pretending to justify overeating and being unhealthy? Even if Bonnie doesn’t say it, “you’re fat, Davia” echoes over and over in her daughter’s head.

“We’re really proud of our bodies, mom, and just because you’re plus-size, doesn’t mean you’re not healthy,” Davia explains, far more calmly than I could ever be given the circumstances.

I wholly expect some Lizzo slander to come out of Bonnie’s mouth next but Dennis interrupts, sliding into the chair next to Davia. Bonnie tries to get him liquored up again but Dennis demurs and proceeds to order every food option on the menu, including the fried artichokes that Davia loves. Dennis is well-intentioned — he wants Davia to have the freedom to be herself in front of her mother — but, as he piles more and more food on her plate, he only adds to his friend’s discomfort. Bonnie chimes in, asking Dennis for his perspective on body positivity, and he says all the right things. You can almost see Davia’s heart glow when he professes that he’d be open to dating a plus-size woman. But when Bonnie asks if he has ever dated a plus-sized woman — “people say they’d do a lot of things in theory,” Bonnie notes, “but it’s what they do in practice that tells the real truth — Dennis can’t answer affirmatively and Davia’s heart just breaks.

And just like that night at the Coterie, Davia’s entire demeanor changes. She throws back her drink and escapes to the bathroom. Alone, after having suffered through all these indignities from her mother and after hearing that Dennis unwittingly prove her mother right about her romantic prospects, Davia wills herself not to cry. It’s a short bit and a nice, subtle performance by Emma Hunton, but its one of the most relatable moments on Good Trouble to date: my breathe caught as I remembered all those moments when I’ve had to swallow my own pain and hurt. Davia steels herself in the mirror, fixes her hair and heads back out to face another round. This time, though? Davia’s all out of fucks: she flops in her chair and shoves a fried artichoke into her mouth. 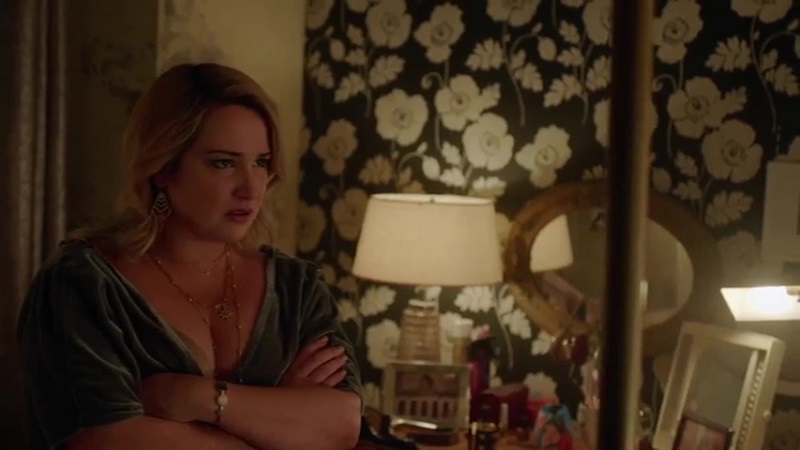 Back at the Coterie, Dennis tries to break the tension with Davia but she pushes him away. He persists, letting himself into her room uninvited, and she rails at him for forcing her to eat in front of her mother. Dennis insists he only wanted her to feel free to be herself but Davia reminds him that he doesn’t get to tell her secrets, just like she doesn’t get to tell his. Being herself around her mother hurts, Davia admits, so she doesn’t do it to protect herself. The tears that she’d been holding in all night finally start to flow freely.

“You think I, I don’t wish that she could just see me and not how I look or what I eat?” Davia asks, “She’s the most insecure, self-loathing person I’ve ever known and she’s projected that on me my whole life which is why I became anorexic…I don’t want to tell my mom what I really think about her, ’cause it will only hurt her. I don’t want to make her feel how she makes me feel.”

It’s a kindness that Bonnie doesn’t deserve but speaks volume about the type of person that Davia is. Dennis hugs her, apologizes and then leaves, giving Davia the freedom to really breakdown. Later, she climbs into bed and posts an unfiltered version of an earlier photo that Dennis took — one that she’d bemoaned as “too real” — and it earns her a like from Dennis and from Jeff. But lest you think that a night of truth-telling and tears undid all of Bonnie’s machinations, Davia reaches out to Jeff via text message and let’s him know she misses him.

+ Callie gets a job working as a research assistant at Legal Aid and — I know you’ll be shocked by this — manages to screw things up on her first day. On the plus side, there’s a lawyer at Legal Aid who seems all too ready to tell Callie about herself and I’m hopeful that maybe she’ll finally wise up.

+ After Callie gets Legal Aid to intervene and stop her father’s eviction, Malika slips him $800, via an intermediary, to help him catch up with rent. I want Malika to be happy so I’m hoping that her dad is the man he seems to be but, like Isaac, I’m skeptical.

+ The Fight Club at Speckulate found out about Mariana’s relationship with Raj and she’s forced to make a choice: team leader or her relationship. Thankfully, she makes the right decision and Raj is sent back to play with the bro-holes. Meanwhile? Evan asks Mariana out for drinks.

+ Next week: A fight breaks out.