Mal Blum’s songwriting and the music they make with their band, The Blums, lives in the tension between wanting to be known and being desperately afraid of what will happen if people find out who you really are.

Their newest record, Pity Boy, dives through crashing waves of anxiety, alienation and disappointment toward a shoreline dotted with glimmers of belonging and something akin to optimism. Each track on the album, Blum’s 5th release and second with label Don Giovanni Records, tells a story of seeking to be seen and articulating self-worth.

This review, such as it is, requires a disclaimer, which is that Mal is a friend both to me and to this weird website, and I wrote the official press release. Objectivity in art writing is fake, sure, but I clearly have a perspective here, which can be summarized as such: A) I go hard in the paint for my trans friends, and B) Pity Boy is a fucking great punk rock record and we all need it.

The album, created in collaboration with Mal’s band, The Blums, is a gorgeous evolution from 2015’s You Look A Lot Like Me, both musically and thematically. On Pity Boy, Mal’s lyrics claim the truth that they are a person worthy of care and community and begin the hard work of pursuing that worthiness. The arrangements are in turns big and careful, punchy and contemplative, unexpected and comfortable. The album is what it is, and Mal is okay with that. They hope it will evoke strong reactions, even if increased publicity means the chance for negative reception from parts of the industry that have never acknowledged their music before. 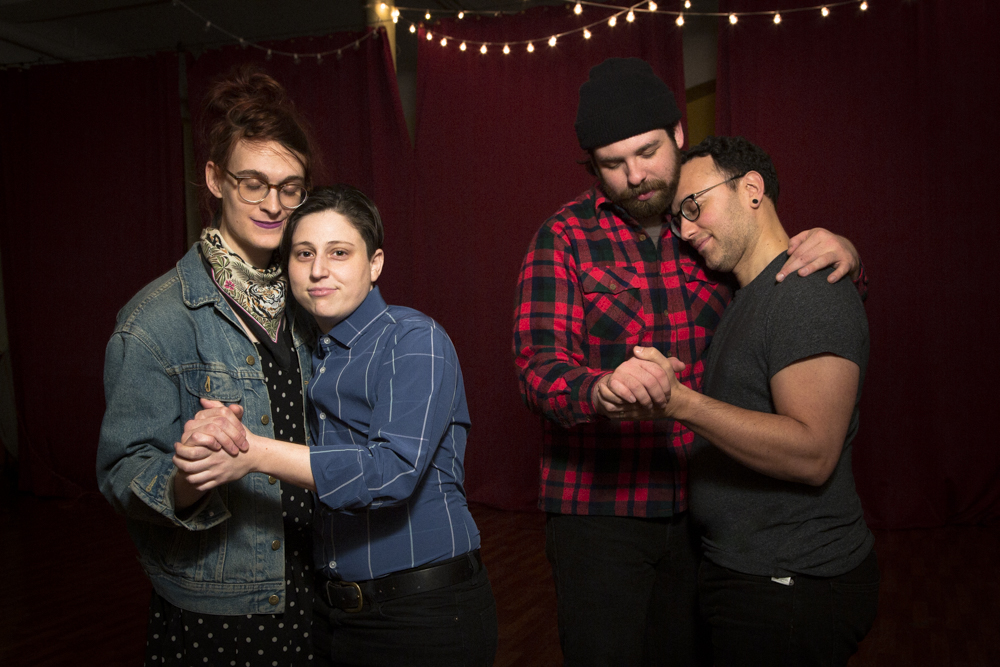 Mal and the Blums // Photo by: Deidre Schoo

“If there is a comfort in being ignored it’s that you can kind of skirt by on the margins of the music industry and only have the people who like your music telling you what they think of it,” Mal said.

Already the album is getting positive reviews, and upcoming shows are selling out. With the support of a manager and a publicist who gets their pronouns right, Mal Blum and The Blums are getting noticed, for better or worse. In the lead up to Pity Boy, the band has released four singles and accompanying music videos, the most recent of which, “See Me,” is out today.
A team including Autostraddle’s Carly Usdin, Drew Gregory, Sadie Edwards, and Mika directed, shot, and styled the music video for “See Me” at A-Camp, and it features a few dozen trans A-Campers and staff looking absolutely radiant. The song is, concisely, about “being a trans ghost,” says Mal, or in a few more words, “this feeling of invisibility in front of people who think that they know you or your work super well but who view you in a way that is inaccurate or makes you feel transparent or small.”

The video, then, shows what it’s like to be not just seen but celebrated. The heart of the story is a sort of dream-world school picture day where everyone gets to wear whatever clothes they want and sit in a chair however they want and smile and laugh and be. One gift of trans community is the way we give each other permission to be ourselves, and another gift is that we are not all the same but we all belong. In the video we get to see Mal accepting the offer of camaraderie that leads to recognition and maybe even to joy.

Of course, accepting the offer isn’t the end of the story. Self-worth is a roller coaster of daily choices, backsliding, and leaps of faith. Pity Boy is about getting on the ride, buckling in, and leaning forward, even when sometimes it feels like your stomach is going to drop out of your body and splatter on the concrete 1000 feet below.

The record has been a soundtrack to my own rollercoaster this spring. Since I agreed to write the aforementioned press release, I have gotten married, given notice at my job of three years, found an apartment in Nashville, changed my name, experienced familial estrangement, prepared for divinity school, and signed onto the Presbyterian Church’s process to maybe become an ordained minister. I’m still learning to do one thing at a time, a skill I may never master.

But all this time, I’ve had Mal’s songs reminding me of what I’m worth, acknowledging how hard that can be to believe, and urging me forward anyway. It’s okay that nothing is quite clean, neat and resolved. We’re still here. Soon, this album will be, too, to accompany you through your Hot Girl Summer and beyond. For their part, Mal is ready.

“I feel anxious but that’s just who I am,” they said. “We’re maybe ten tickets away from selling out in New York and that’s what I’ve been fixating on, and now that we’re doing it I’m fixating on putting on a good show so people will buy tickets to the next show. I’m dealing with some personal stuff but trying to stay focused. I feel like the feedback has been really touching. I’m ready for it to be out there.”

You can buy Pity Boy directly from the label or wherever you buy music. You can also stream it starting Friday, but like, pay trans people for their art if you can!!