Gloria Casarez passed away on Sunday, October 19th, after living with cancer for five years. She was 42, a Philadelphia native, and a longtime activist and organizer in Philly’s LGBT and Latin@ communities. Casarez fought tirelessly for her communities, acting as a mentor, galvanizer and leader. 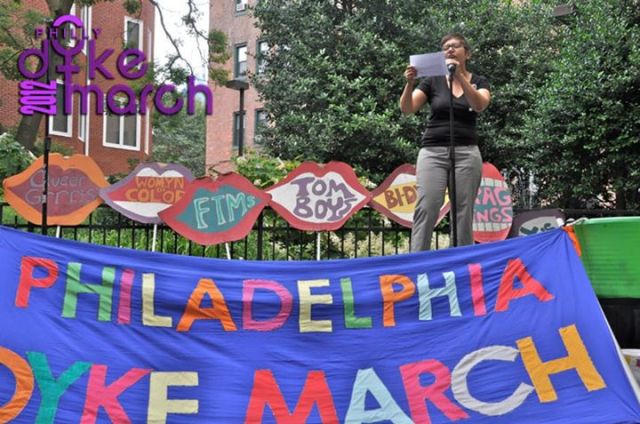 Casarez wore many “hats” in her life as an organizer: Director of the Philadelphia Office of LGBT Affairs, Executive Director of GALAEI, the Gay and Lesbian Latin@ AIDS Education Initiative, founding member of Philly Dyke March, founding member of Empty the Shelters, Grand Marshal of the Pride Parade. The hat she always wore was mentor. Every single person I spoke to who had known Casarez, in any capacity, younger or older than she, said they saw her as a mentor in their work and activism. Her reach was large and her impact was great.

“She was a total bad-ass,” GALAEI said in a statement on their Facebook page. “And she fought for what she believed in — holding us all accountable to act against any injustices that were perpetuated in our community.”

In 2008, Casarez was appointed as the very first director of Philadelphia’s Office of LGBT Affairs. As director, she pushed her agenda hard, keeping Mayor Michael Nutter’s attention on vital issues for the LGBT community. “She was very concerned,” said Elicia Gonzales, Executive Director of GALAEI, “that she have her finger on the pulse of what was happening in the communities. She was regularly checking in with folks from all over, in every aspect of the community.” Chris Bartlett, Executive Director of the William Way LGBT Community Center, spoke to her other initiatives:

“Going department by department, whether it was Behavioral Health, or the Health Department, or the Department of Housing, or the School District, she was able to identify the need and get resources there. One of the things she pushed for was recent legislation that expanded access to trans people for healthcare, and made the restrooms in the city non-gendered. Getting that bill passed was a heavy lift, and the fact that she was able to get that legislation and do the work that she did in City Hall enabled us to position ourselves as the greatest LGBT city in the country, and I really believe that it is. She knew how to use her power for good.”

Casarez also used her platform to speak out against violence faced by trans women of color in Philadelphia. She gave remarks at a vigil for Diamond Williams last July.

“We’ve done a lot of work here in Philadelphia on LGBT issues and I’m proud to be a part of these positive changes in law, policy, and protections — but — we still have work to do. And by WE, I mean all of us.”

In a ceremony in front of City Hall, the Mayor spoke to the personal impact Casarez had on his work, and assured the community that he would continue to prioritize the issues Casarez advocated for. “Know that you are cared about, know that you are respected, know that you are protected in this city,” he said. “I’ve had some of my best moments of life in public service with many of you.” In a statement released on Sunday, Mayor Nutter said, “our entire Administration team has benefitted from having had the opportunity to serve our City and citizens with the support of her leadership and wisdom.” 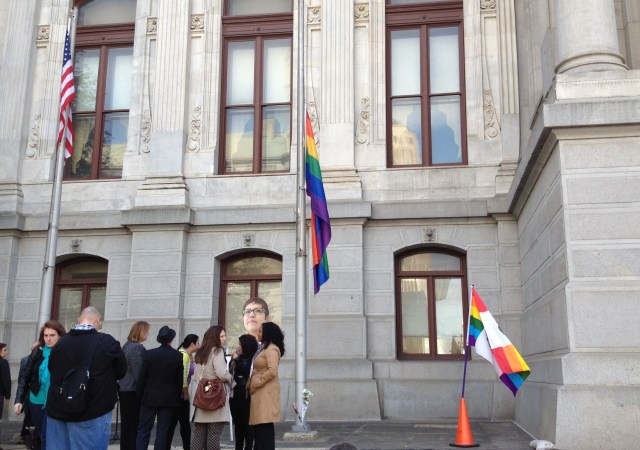 Community members gathered at City Hall to remember Casarez and lower the Rainbow Flag to half-mast.

Casarez continued with her work for the City through the last weeks of her life, recently presiding at the fifth annual City of Philadelphia LGBT History Month Celebration and Flag Raising Ceremony at City Hall, where the City honored organizations including GALAEI, the Mazzoni Center and Philly Black Pride.

“She was a big deal for all of us,” said one young organizer who Casarez inspired.

“What Would Gloria Do?”

Before she worked at City Hall, preceding Gonzales, Casarez was the executive director of the GALAEI for nearly ten years, though even after leaving the organization in an official capacity to work for the Mayor’s office, she provided support and inspiration. Gonzales spoke to Casarez’s commitment to her vision for GALAEI:

“[Gloria] wanted to make sure that we remained a social justice grassroots organization, and if there was to be growth, it would be serving the needs of the community, and that we were always taking into consideration folks who were underserved. …She wanted to make sure we were paying attention to who’s not in the room, who’s not at the table, whose voices aren’t we hearing from, and making sure that those were people we continued to work for.” 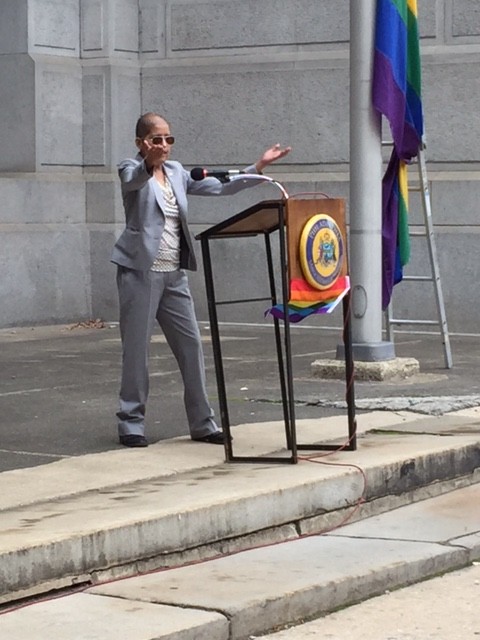 One of Casarez’s priorities while directing GALAEI was her work with transgender communities in Philadelphia. She worked with Casey Cook, who then directed of Prevention Point Philadelphia, to found the Trans-Health Information Project, which became one of the only information projects of its kind in the country.

Under Casarez’s leadership, the organization followed in the vision of GALAEI founder David Acosta. Both Casarez and Acosta were “incredibly visionary,” Gonzales told me. “They’ve both always seen all of our issues as intersecting. Being queer and Latin@, homelessness and poverty are part of that struggle. I know she saw the intersections of what it meant to be queer and Latin@ with other social issues.”

Casarez’s vision and leadership remained alive and well in GALAEI after she left the organization for the Mayor’s Office. “I would often reach out to her for guidance,” said Gonzales. “In the office, there were certain things, that if there was a question for how to proceed, I’d say WWGD — What would Gloria do?” 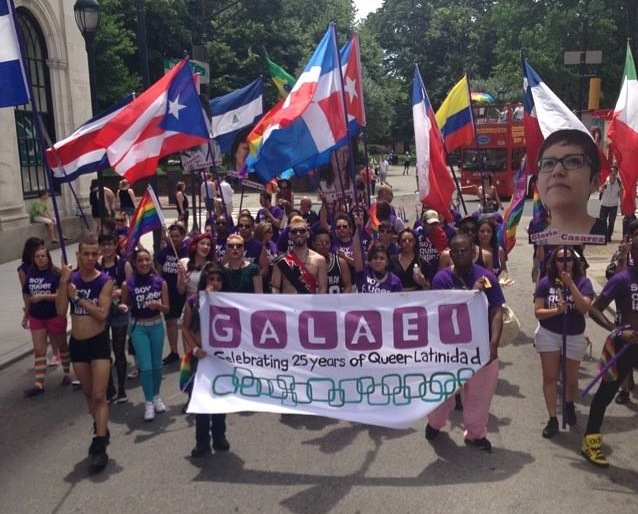 “The Dykes, United, Will Never Be Divided!” 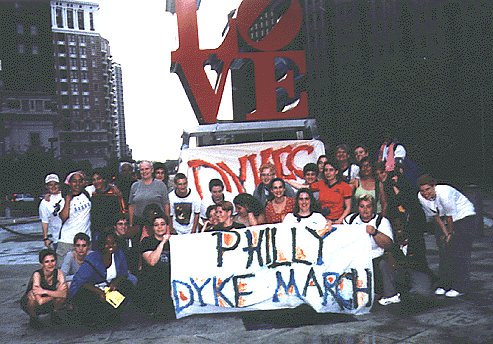 In 1998, Casarez became one of the founding members of the Philadelphia Dyke March and remained an active member of the Philly Dyke March Collective until the end of her life. At the 2014 March, she took the stage to rally the crowd:

“Every year, Gloria’s familiar voice recalled the history and purpose of the march and served as the galvanizing call to action we needed… At the end of each march, it was Gloria I’d look to and I’d always find the ultimate comfort in her wide smile and glistening eyes as she’d say, ‘Amber, this was the best one yet.’ … It feels impossible to imagine marching on without her by our sides. I don’t know how we’ll do it, but I do know that when we do find the willpower to march, it will be Gloria’s strength in our steps, her words in our mouths, and her passion in our hearts. She will fuel our purpose as she always has and at the end of each year, I know we’ll hear her in the wind whispering, ‘This was the best one yet.'”

This year, to celebrate fifteen years of the Dyke March, from 1998-2013, Casarez and other Dyke March organizers created an installation at the William Way Center commemorating the March’s history, including photographs, t-shirts, stickers, and a video of footage from the 1998 and 2013 Marches. “Gloria worked tirelessly to make the exhibit happen,” said Kate Hinchey, William Way Center Development and Communications Associate and Dyke March Organizer. “She personally archived all of the stuff. We wouldn’t have all of this stuff without her. She constantly made sure we had what we needed from City Hall.” 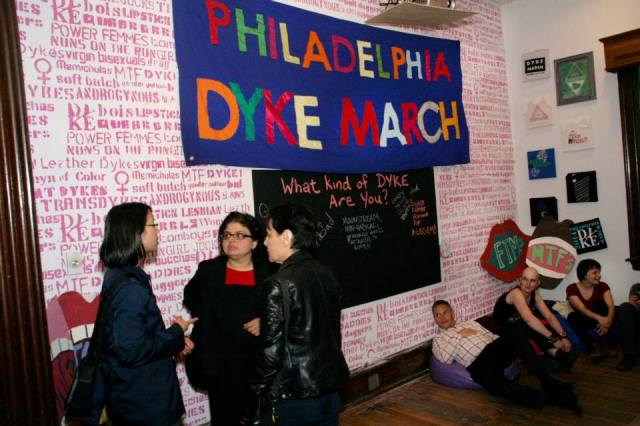 When it came to her organizing, Casarez also wasn’t afraid to push people, call them out or, as Bartlett put it, “lovingly confront.” He gave me an example: “When we wanted to do Homecoming, which is one of [the William Way Center’s] fundraisers, on the same night as the Dyke March, she said, ‘Can’t you find one other night in the year? This is our night for the Dykes!’ And she was totally right.”

Hinchey confirmed this. “In this community, she wasn’t afraid to call people out and she never took any shit.”

“There are so many people that have inspired me.”

Casarez started her political organizing in college, and right out of school she began working on anti-poverty and welfare rights campaigns, during the Clinton administration. From this work came the first organization Casarez co-founded, Empty the Shelters, which organized around housing rights. In a 2010 interview with the Philadelphia Gay News, Casarez talked about the organizers she looked to for mentorship and inspiration:

“There are so many people that have inspired me. When I was younger and doing grassroots work, I was moved over and over again by women who were poor but always put their families first and tried to make things better. …We did housing takeovers [where you take over an abandoned house and move people in to give them a place to live], which can be dangerous, but they were fearless. Watching that mama-bear instinct was inspiring. Working with David Acosta when I first came to GALAEI was also a learning experience. He was the first man I ever met who described himself as a feminist. He was a mentor, both as an activist and as a creative person.”

Casarez was also involved in the efforts to save La Milagrosa, the first Spanish-speaking church in Philadelphia, which her great-grandparents attended. 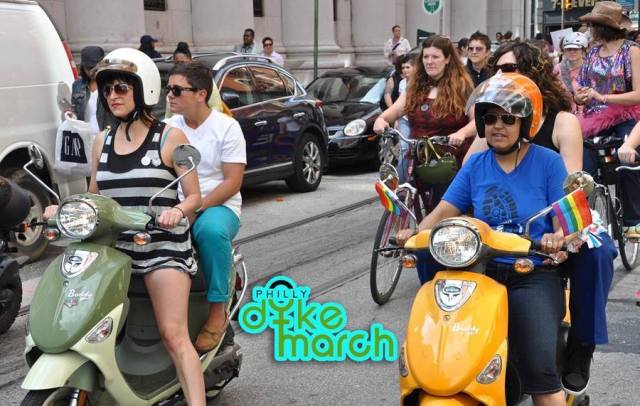 Gloria and her wife Tricia ride at the 2012 Dyke March.

Casarez is survived by her wife, Tricia, their families, and a community that loved and loves her dearly. She has received countless awards and honors for her work, including the David Acosta Revolutionary Leader Award from GALAEI, the Kiyoshi Kuromiya Award for Justice from Philadelphia FIGHT, the Annual Community Service Award from the NAACP, and the Cheryl Ingram Advocate for Justice award from the Philadelphia Bar Association. She also threw the First Pitch at a Phillies game in 2010.

Casarez’s passing is a tragedy for Philadelphia, and for communities everywhere that have been impacted and inspired by her. Her life and legacy will carry forward in our work and our struggle, but we wish she were here to do it with us.