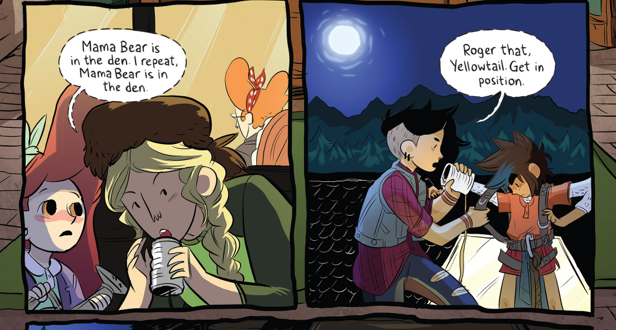 The issue opens with an Ocean’s 11 or Ocean’s 13 (but not Ocean’s 12 because that one was pretty bad) style caper. The girls are out to steal that weird blue glowing crystal that Ripley saw in Rosie’s cabin way back in issue #1. Each of the girls has their part to play – April and Molly provide the first distraction, then Jo, Diane and Jen get Rosie to go outside and Mal lowers Ripley down into the cabin by a rope. And by the way, Jen is absolutely amazing and absolutely adorable as a member of the Lumberjanes’ crime team. She wears an awesome sweat suit from her former high school, she makes bird noises when they’re supposed to be making monster noises, and when the team needs someone to step up and distract Rosie, she faces her biggest fear and nervously sweats her way through the task. 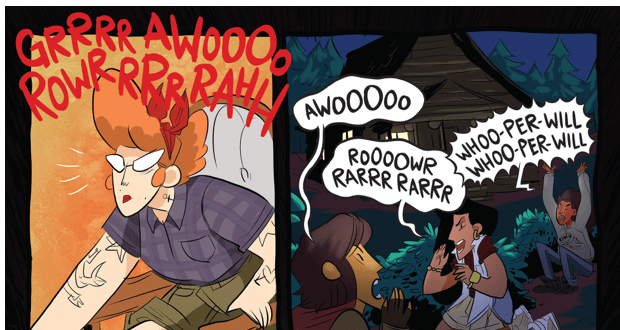 So, anyway, they succeed and with the crystal and the golden eye thing that Jo has, they’re ready for part two of the plan. But before we move on, April demands that Diane and Jo explain what’s going on. Just as Autostraddle readers Erin and Samantha suggested in the comments of my review of the last issue, we find out that Diane is, in fact, Artemis, who is battling with her brother Apollo (who was behind that trouble at the boy’s camp) to try to take over the universe after their father Zeus gives up the throne. So, you know, pretty normal stuff.

Then, as if the story wasn’t already destroying my emotions, best friends to the end April and Jo start fighting because April is hurt that Jo didn’t trust her with the secret that she had one of the golden eyes all along. These two always tell each other everything, and you can tell that even in a group of girls who are all super close, April and Jo have a special friendship. So with Jo keeping secrets, it makes sense that April would be upset. But seeing April cry just breaks my heart. I just want them to be happy! 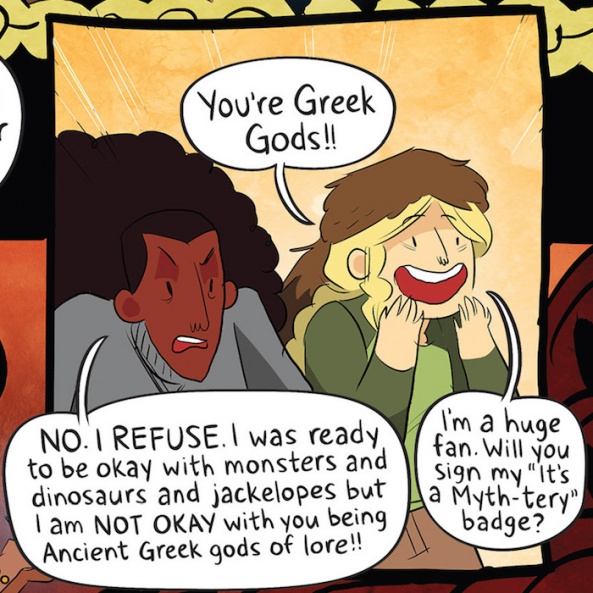 art by Brooke A Allen

Soon, the Lumberjanes, with Jen and Diane (or Artemis) in tow, are headed back to that underground temple that they were trapped in back in issue #3. They easily get through most of the cave, since they’ve already done it, but once they get back into the “mythical ancient cave of magic and wonder and anagrams for some reason,” as Molly puts it, they’re suddenly dealing with an army of giant, electrocuting Lightning Bugs and some A League of Their Own references.

Brooke Allen’s art, once again, totally shines. The way she drew Jen during when they were stealing the crystal was perfect, and Jo and April’s faces during their fight and at the end of the issue brought tears to my eyes. I don’t even know where to start with describing how cool and creative the technique she used when Diane is explaining about all the Greek god stuff is. And then the temple at the end; just plain beautiful. The issue ends on a super-dramatic cliffhanger and it’s absolutely killing me that I have to wait to find out what happens.  The next issue will be the last of this first storyline, and Holy Sylvia Rivera are we in for quite the finale.

Also, on a slightly different note, coming up in May 7-8, 2015, The Center for LGBTQ Studies at The Graduate Center, CUNY is presenting the first ever university-based LGBTQ Cartoonist and Comics Conference! They’re currently accepting proposals via email to queers.comics@gmail.com, with a deadline of November 3. The Queers & Comics Conference “brings American & international LGBTQ cartoonists, comics writers, and artists together with scholars and fans in order to discuss their craft and to document the history and significance of queer comics. The conference will offer two days of panels, workshops, portfolio reviews, slideshow presentations, roundtable, discussions, and an exhibition of queer cartoon art” and will include Alison Bechdel as a keynote speaker. For more information, you can check their website, or follow @QueerComics on twitter and Queers & Comics on Facebook.