Welcome to the ninth recap of the sixth season of Glee, a show that teaches every adult how to give themselves a home dental exam with a pipe-cleaner and a pair of pliers. This week was especially thrilling in that, merely three episodes away from the series’ sure-to-be-stunning finale, Glee is finally getting around to developing the new characters they politely requested us to develop interest in several episodes back and then ignored until this very week!

I’m not 100% sure why they’re choosing to dwell on McKinley High when we could be having a Vacation Edition of Glee starring Santana and Brittany At The Beach. I must admit that I did not put the usual level of effort into this week’s recap, due to its startling lack of lesbianism or Old New Directions, but hopefully that’s okay and you’ll still laugh at least a few times.

This week’s shenanigans are loosely centered upon Sue Sylvester, who’s been preparing for the draconian Presidential Fitness Test by subjecting her young charges to fat-shaming and various factoids about what is and isn’t hard.

Sue: “You think this is hard? Try consuming your own twin in utero, that’s hard! I’m not leaving here until at least three of you pass out or puke.” 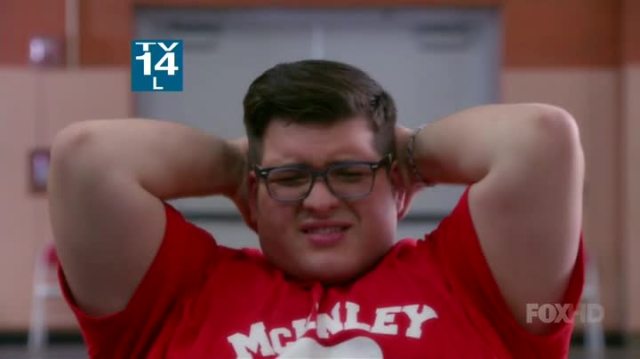 Can you see it? It’s like at the base of my neck? Is it a pimple or a spider bite? I can’t stay in this position much longer!

She’s particularly concerned about Roderick, who is struggling to climb the rope. I’m having flashbacks to when I failed the Presidential Fitness Test due to my inability to excel beyond a negative 6 on the V-Sit. Meanwhile, Marla Hahn could basically fold her entire body into a V and fly away home for the winter. Life is hard, y’all.

Spencer’s also concerned about Roderick’s “lead weight” identity. Unfortunately, he’s not concerned enough to actually do something about it, like help Roderick get into shape… until Roderick sits down next to Spencer’s Crush Object, The Poor Man’s Breckin Meyer, who has Alex Vega hair and is categorically uninterested in Spencer. 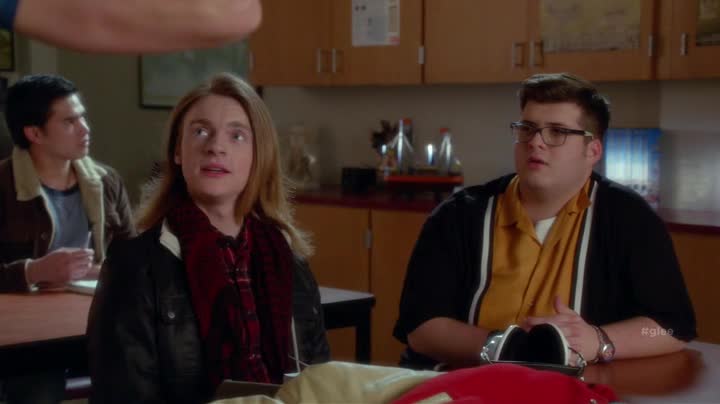 Quinn Fabray? Nope, no idea where she is, sorry

Breckin Meyer the IVth excuses himself from the awkwardness, and Roderick gives his eval of Spencer’s game:

Roderick: What was that? Were you just flirting with him? Was that you flirting?
Spencer: You wouldn’t understand. You’re not a player like me.
Roderick: Well, that was the weirdest thing I’ve ever seen. If you think that was romantic then you’re not a player, you’re kind of a creeper.

Cut to the hallowed hallways, where Sue saunters along with Superintendent Ted Beneke, bragging about her drones in an attempt to snag the United States Principal Of The Year Award. 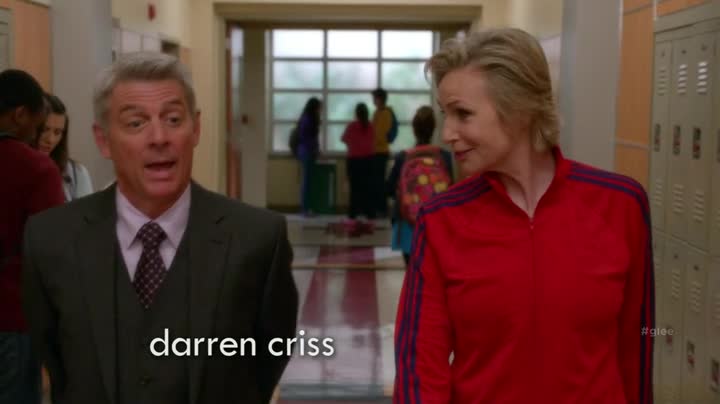 Oh if you thought Season Four was bad, just wait ’til I show you Season Five!

Unfortunetly, Beneke’s not prepared to sign off on the recommendation unless Sue does him a favor by helping his gay nephew prep for his Bar Mitzvah. So thus we meet Myron Muscovitz, who I will be referring to as Myron Manichewitz for the remainder of the season, because I want to. For all ye goys out there, Manichewitz is a young Jew’s first exposure to cheap wine, and it’s sure to put your tween to sleep after a particularly moving rendition of The Story of Passover. 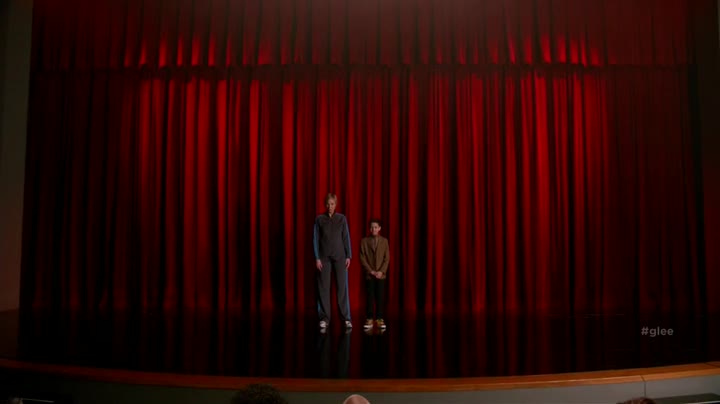 I always wanted to be a Tenenbaum, you know?

The young Manichevitz plans to perform a musical number at his Bar Mitzvah and would like The Glee Club’s feedback on this situation:

Kitty suggests his dancers smile more, so then he fires everybody. 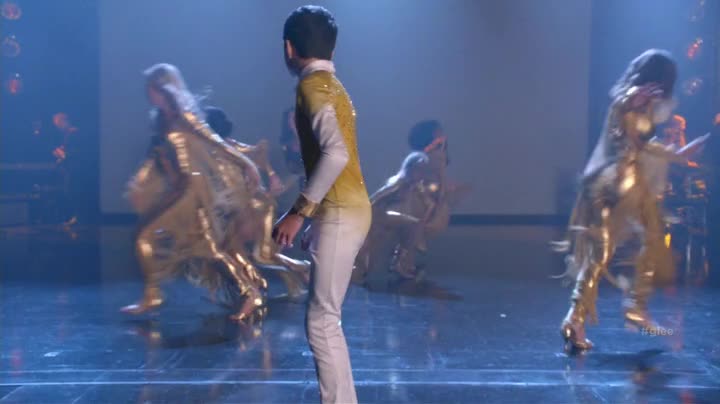 Then Manichvitz tells Rachel, Will and Sue that he wants to hold his party in the April Rhodes Memorial Pavillon with the Glee Club as his opening act. 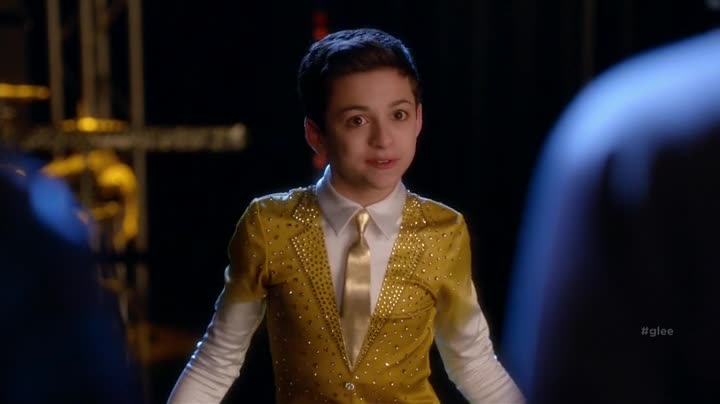 Rachel briefly protests, citing the Club’s need to prep for Sectionals, but then remembers, as per every previous season, that “prepping for Sectionals” really just means mentioning how many weeks away Sectionals is within the first ten minutes of every pre-Sectionals episode. So they’re already pretty prepared, is what I’m saying. 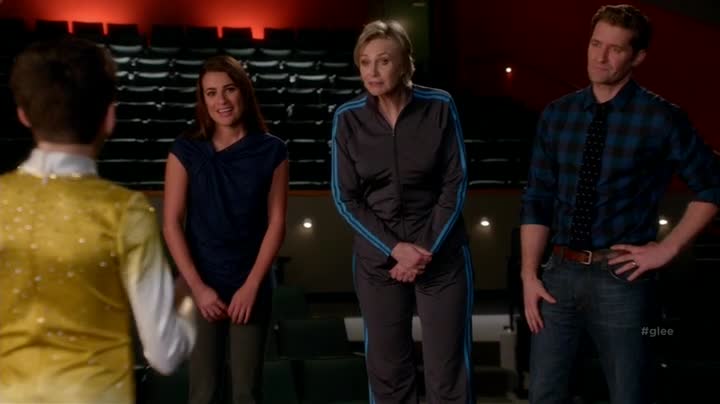 Well I for one really like the blue accents on your black gown. 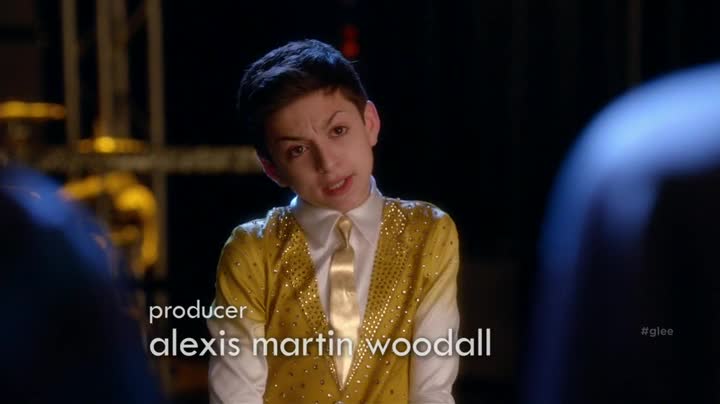 Bitch, this gown is white and gold!

Meanwhile, Mason’s got a throbbing in his heartspace for Jane, but his attempt to ask her on a romantic date to The Breadstix Garden is foiled by Madison, who reminds him that carbs are off limits and drags him away from this three-episode romantic possibility. 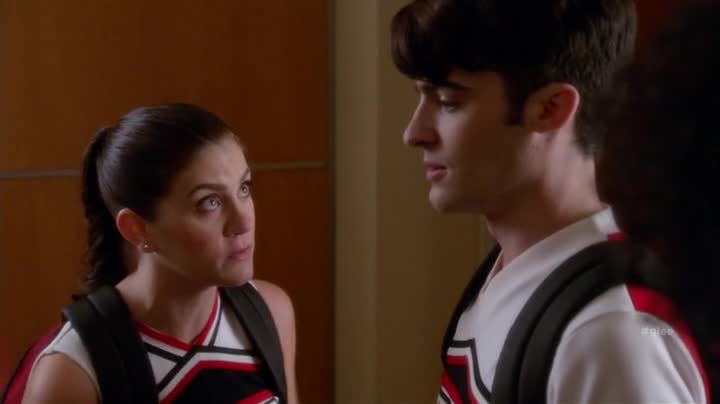 You promised me we could start Season Three of “House of Cards” tonight, asshole

Forlorn, Mason brings his Glee Club bros into the locker-room for some shower talk. 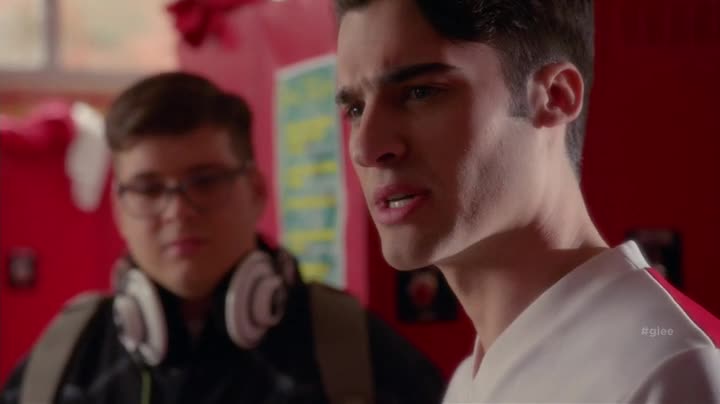 Sparia fic? Really? My sister always told me to read nothing but Pailey!

Mason explains that their parents were too Stage Momish/Dadish to be actual Moms and Dads, and therefore Madison eagerly took on a motherly role towards Mason from day one and has been licking her fingers and smashing them into his eyebrows since pretty much forever. Therefore, Mason needs Roderick to ask Madison on a date so he can sneak away with Jane into the wardrobe and through the woods. 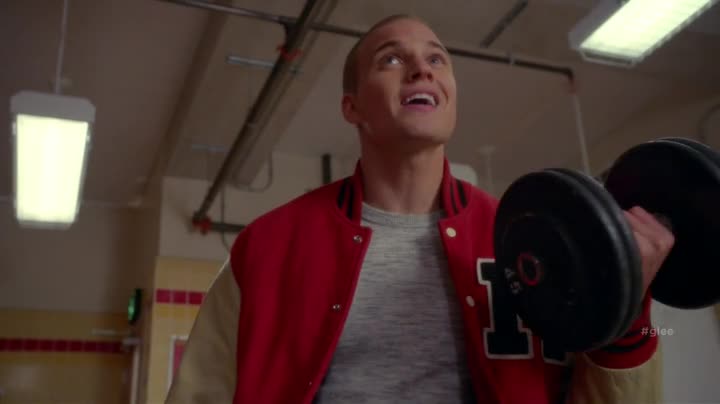 This is how gay men have sex

Speaking of dates, Spencer wants to become Roderick’s personal trainer and then wants Roderick to secure him a date with Allister Breckin Meyer IIIVXI.

In the Teacher’s Lounge, William wants to brainstorm songs for the Bar Mitzvah but Rachel’s not much help ’cause she barely knows these kids. Obviously she spends most of her teaching hours fantasizing about shower sex with Quinn Fabray. 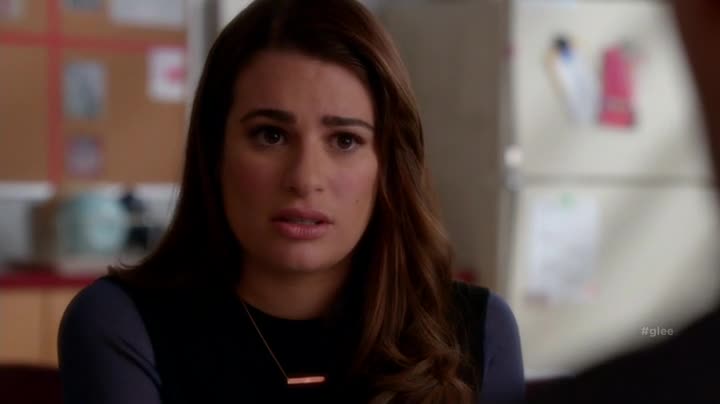 Wait really, you figured out the password to my secret tumblr and read all my Faberry fic? 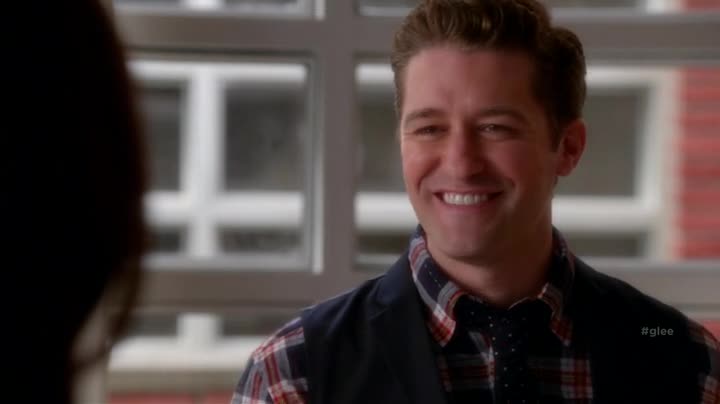 Fake Quinn: So, you want us to sing at a spoiled little rich kid’s birthday party?
Rachel: It’s a Bar Mitzvah. Have you guys had any Jewish life experiences? This is a sacred honor.

It’s true. Just ask my brother who spent the entirety of his Bar Mitzvah money on a massage chair. Sitting on that beast was a sacred honor. 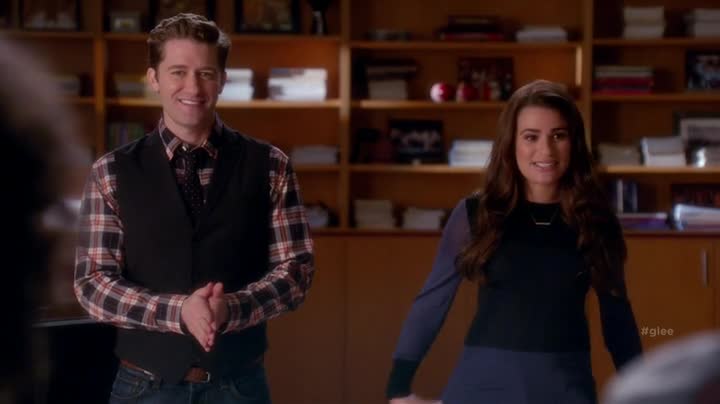 So which one of you wants to put together a V’Havtah / Shemah Yisrael mash-up?

William: The clock is ticking. Sectionals is in two weeks, guys. don’t underestimate this challenge. There is no tougher audience then —
Fake Quinn: JEWS!
William: Tweens. Vicious, pubescent teens with zero tolerance for a bad act.

The children are commanded to team up, and Mason practically leaps from his seat to ask Jane to be his Gal Pal, but his sister wife interjects his trajectory. 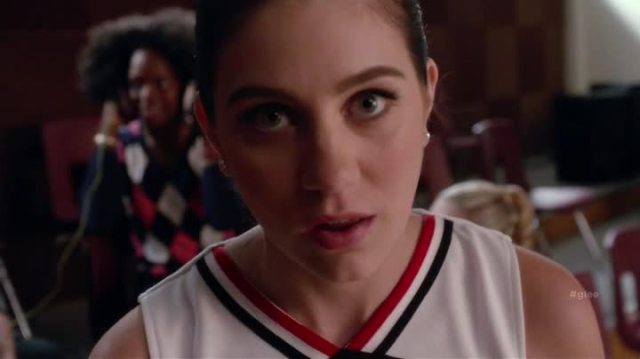 Just got stoned and watched “The Last Unicorn”