There’s a certain smell that takes me back to Girl Scout camp right away: sunlight on a carpet of pine needles. And there’s a certain feeling I’ve tried to recapture ever since: lying peacefully awake beneath wood smoke and starlight, talking with women. I’m 26 and I live in the city, but I jump at any opportunity to get deep into nature, either with my girlfriend or, for a few years running now, during an annual camping trip with our queer feminist book club. My first year at Camp Juliette* I was six years old. I went with a girl from down the block, who sobbed with homesickness all night and then promptly told her mother I’d been the one bawling inconsolably, as if somehow our parents would scent tears on us in the minivan on the way home. My mom didn’t believe that for a moment, since I had come home complaining that I couldn’t stay longer. I kept going back every summer until I was 16, working the last two years as a counselor-in-training. 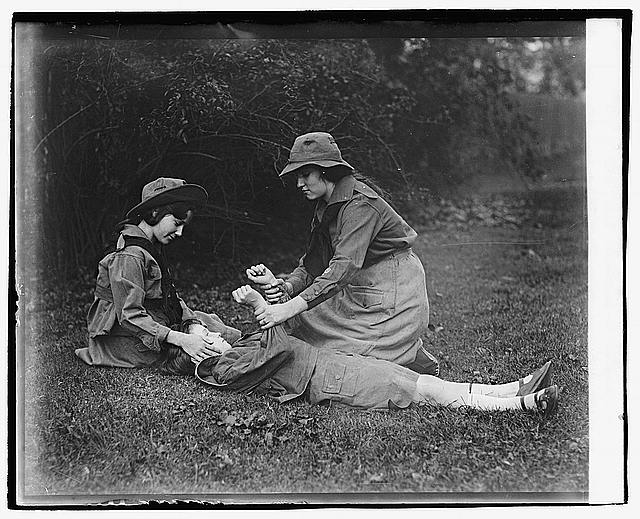 Throughout this time I was kind of a loner, a weirdo. I read too much and cried at dumb things and made jokes that nobody liked. My awkwardness should have followed me along to Girl Scout camp, but somehow I managed to shed most of it in the 40 miles between the city and that patch of unremarkable forest. At the time I supposed that everyone else fit into their normal lives as well as they did into camp, and I was getting away with something extraordinary. Looking back, it’s clear that the woods had this normalizing effect on everyone. It’s clear because this “everyone” included: the hyperactive blonde (there on scholarship as I was) with seven siblings, all of whose names began with the letter K. The group of girls who, for an entire week, annexed the identities of the British royal family. The camp director, a dour-looking 30-something with a severe black bob, knee-length pleated shorts, and deep love for both romance novels and Star Trek. Counselors from Australia and South Africa and Russia, with accents of varying comprehensibility to our Midwestern ears. Counselors with dreadlocks and shaved heads and, sometimes, relationships with each other.

By my last few years at camp, it had become clear that one of the things that marked me as a weirdo was liking girls. I was well convinced that there were no lesbians in my town and very few in the rest of the world, and consequently it seemed both frightening and pointless to come out beyond the tiny handful of friends who knew. I felt sublimely at ease under the pines of Camp Juliette, and precisely because of this, I felt like I couldn’t be out there, either. It was a place of unceasing group intimacy — aside from half an hour a day of quiet time, we lived together. Connections were forged instantly. I had a hard time making friends at home; what relationships I did have tended to be chilled by reflexive irony and the need to seem much older than we were; the days of slumber parties had dried up. This closeness at camp was precious, and I wasn’t willing to risk making my camp friends uncomfortable around me. (Especially since I usually did have a burning crush on three or four girls at a time.)

I dropped a few little hints: talking about my love of Ani DiFranco, making rainbow-themed friendship bracelets during arts and crafts. And my eyes were wide open. As I watched and listened, rumors coalesced into miraculous facts: I was surrounded by gay women. They didn’t talk about it, but they also didn’t try to hide it (there had been glimpses of hand-holding, couples leaving camp together), and wouldn’t deny it if you asked. Word got around: some of the most beloved counselors were definitely queer. The astonishing fact was that nobody cared. I had sometimes flinched at casually homophobic remarks tossed off in the manner of preteens everywhere, but the same girls who made them continued to worship even the dykiest of counselors and jockey for a seat beside them in the dining hall. For the first time in my life, I had proof that you could be a gay woman and be not only tolerated, but liked. You could even be gay and weird and still be liked.

I knew Allie from the city, where we competed in poetry slams together. She was bisexual and Wiccan and had a boyfriend who believed he could contact real dragons. She also had caterpillar-thick, self-inflicted scars laddered from shoulder to wrist, which, at camp, she repurposed as an object lesson about why you should never scratch your mosquito bites. There was Sam, who had a buzz cut and no feeling in part of her hands because she’d punched out a garage window in a fit of anger. Among my closest mentors were Hayley and her girlfriend Kathy, who had been my counselors since I was tiny. By the time I was a counselor-in-training, I was carrying around biographies of Abbie Hoffman and registering my disapproval of the Bush administration and other American sins of the era by clasping a fist rather than an open palm over my chest during the daily flag ceremony, to complement my punk band and ineffectual political organizing back home. Hayley made a point of asking what I was reading and once whispered to me that when she dressed up as a kind of off-brand Captain America during assemblies, she took secret pleasure in letting the flag she wore as a cape drag on the ground. 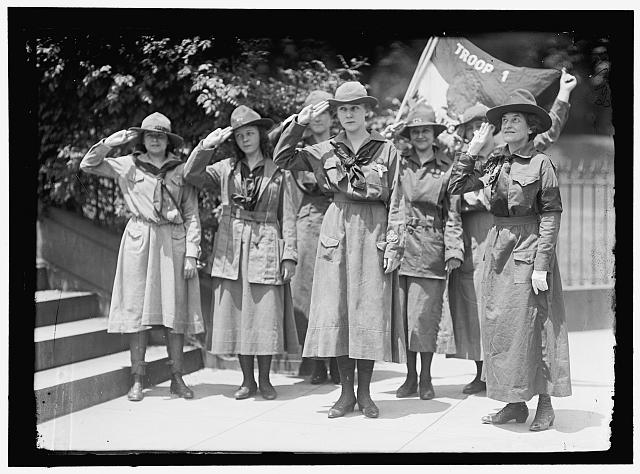 via Library of Congress Prints and Photographs Division, 1917

In the context of the woods, removed from our normal social circles, nothing seemed odd or unacceptable about any of these women. When I tell people about my camp experience, they’re surprised that such a climate could flourish within a quintessentially all-American institution — an institution for American children, no less, who must be protected from just about everything. At the practical and local level, I think it worked like this: unless they’re instructed not to, kids are predisposed to adore the adults in their lives. It was only a bonus that these adults were young and cool and teaching us to build one-match fires, scare away raccoons, and sing songs that would stay in our (and our unlucky parents’) heads for the rest of our lives. Sure, some parents might have arched an eyebrow at the less-traditional-looking counselors, but what were they going to say when their children raved about the fun they’d had with them? 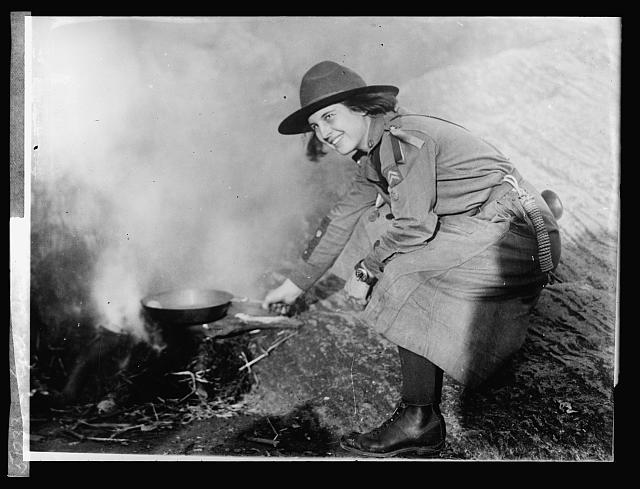 At the institutional level, the Girl Scouts are a whole different species from the conservative-minded, no-gays-allowed Boy Scouts. Autostraddle reported in October on the Girl Scouts of Colorado’s explicit statement of inclusion of all girl-identified children, whether cis or trans. Diversity is a core value, and in 2001, national president Connie Matsui confirmed publicly that the organization does not discriminate according to sexual orientation. They’ve rarely foregrounded these issues, preferring to carry out their mission of tolerance and girls’ empowerment through action rather than controversial proclamations. Even so, conservative ire does find its way to the Girl Scouts every so often. In February, Indiana State Representative Bob Morris issued a letter railing against their purported “close strategic affiliation with Planned Parenthood” that advocates “sexualizing young girls” and list 47 (!) “lesbians, feminists, or communists” as role models. He ends by announcing his decision to transfer his daughters from their Girl Scout troop into a scouting organization that will teach them “values and principles that will not confuse their conservative Hoosier upbringing.”

What strikes me about my gay Girl Scout camp days is just how confused we weren’t when it came to the queer women we looked up to. Most of us hadn’t encountered anything like them in our conservative Midwestern upbringings, either, but we were too busy learning how to fold a tent and make hobo pies to spend much time reeling with confusion. Give your girls some credit, Bob. They’re tough and resilient and confident in their own individual character — at least they should be if Girl Scouts has accomplished its goals. 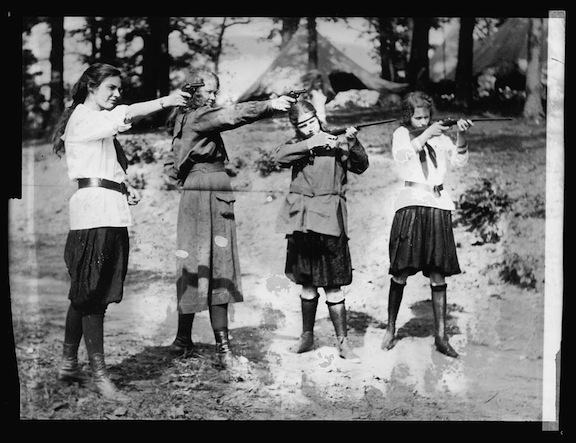 * All names changed to protect a wonderful place.

Daphne has written 1 article for us.