Hello weirdos!  This year for the first time in our entire lives, Thanksgiving and the first night of Hanukkah fall on the same day.  This has literally never happened before (the last time the calendar overlapped like this, Thanksgiving didn’t officially exist yet), and it won’t happen again for about 77,000  years.  Like most Jewish holidays, Hanukkah celebrates a time that a bunch of people tried to kill the Jews but didn’t succeed, so we rejoice and eat a lot of unhealthy food.  Although it was not founded as a gift-giving holiday, its typical proximity to Christmas means that a lot of Jews started exchanging presents on Hanukkah, which means that by the time the rest of America start officially freaking out about Black Friday sales, all my holiday shopping will be done already.  This alone is reason to celebrate; why not celebrate with a sandwich?

As soon as news outlets started reporting the Thanksgiving/Hanukkah overlap, my thoughts went immediately to food (surprise).  How could we best combine the traditional meals of both holidays into one delicious gut-bomb of autumnal flavor?  The answer, my friends, is this sweet potato latke Thanksgivingukkah sandwich, and I am here to tell you all about it. 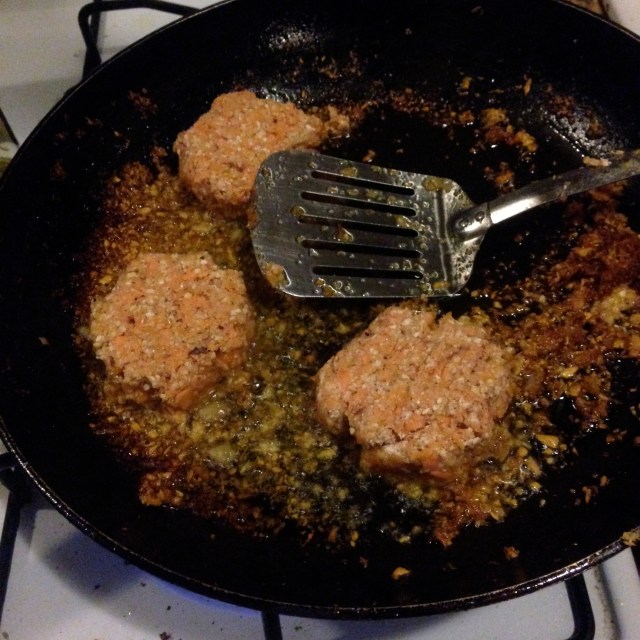 For as long as I can remember, my dad has been making latkes for Hanukkah.  This year, I asked him to take it one step further and make his potato pancake situations with sweet potatoes.  He expressed some trepidation regarding the texture and consistency of the latkes, but when I explained my plans to eat them with cranberry sauce, he got on board pretty quickly.  Here’s my great grandmother’s recipe:

This is pretty arbitrary, as most recipes by weird old ladies tend to be.  I’m not going to lie to you; I succeeded at my first ever latke endeavor by trial and error.  I found out with my first batch of latkes that I definitely needed more binding agent, and threw more egg (replacer) into my mixture (the equivalent of about 3 eggs).  Sweet potatoes are weird.

As much as I’d love to tell you to do everything by hand so you can feel really connected to tradition or whatever, I cannot recommend enough that you use a chopper or food processor to chop up your potatoes and onions.  When they’re all diced up into tiny little pieces, add your egg, salt, pepper, cinnamon (to taste) and as much matzo meal as it’ll take to turn your mixture into a solid, malleable consistency.  You’re gonna want to use your hands.  It’s gonna be messy.

Now’s the fun part – heat up a bunch of oil in a pan and wait for it to start bubbling.  Drop balls of your mixture (about 2-3 tbsp each) into the oil, press down with a spatula and fry.  This seemed pretty self-explanatory, but I have a couple of pointers for you: don’t get too greedy with the size of your latkes, and don’t flip them too often.  The bigger latkes fell apart pretty quickly, and over-flipping prevented them from cooking enough on either side.  My first few rounds were just sort of a pile of fried mush until I got the hang of it.

When your pancakes are lookin’ brown and crispy on both sides, place them on a paper towel to cool and hang out for a bit.

Now it’s time to assemble this sandwich, or any sandwich you feel like compiling from whatever you guys eat on Thanksgiving.  I happened to have rosemary gravy, spinach, Tofurky slices and clementine cranberry sauce on hand (or you know, I bought them on purpose to make this sandwich), so I used those.  I spread a layer of gravy on one latke, and then layered spinach, Tofurky, cranberry sauce and finally the other latke on top.  It was like a vegan double down of fried Thanksgiving deliciousness.  I had finally accomplished the dreams of my ancestors. 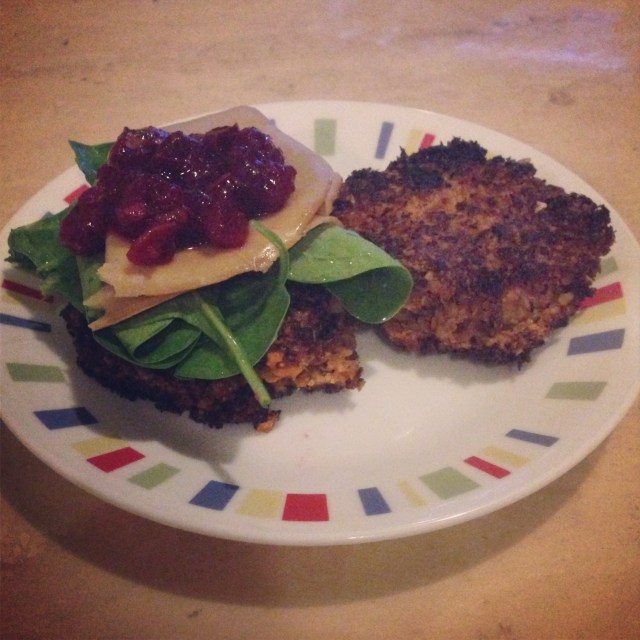