Fellow Americans, Thanksgiving is upon us. A few years ago, Carolyn graced us with live blogging her first Thanksgiving as an Out Vegan Lesbian. Continuing in that tradition of Autostraddlers with dietary restrictions, I bring you the saga of my preparations for my Thanksgiving as an out queer lactose-intolerant sometimes-vegetarian.

This year I’m excited to be able to go back to New Jersey for Thanksgiving with my family. Apparently they played Scattergories last year and my grandma referenced Beyoncé. I’m feeling slight dread at the questions I know will be thrown at me. Mostly this one: “So what are you going to eat?” 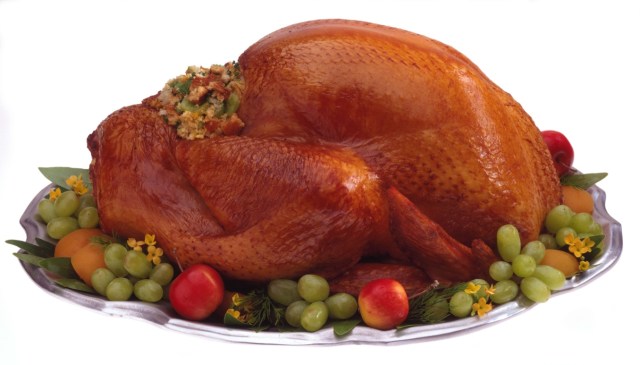 Hint: It’s not the Turkey (via about.com)

My eating habits have shifted plenty. I stopped eating red meat after my freshman biology teacher dissected a fox he had found dead on the side of the road. Then I cut meat out altogether. Eventually I decided that was silly, and started eating everything again. When I started college, I decided the only meat I would eat was venison hunted from the nature preserve where my dad and step-mom lived. And then I started to feel the rumblings of lactose intolerance.

It’s been hard for my family to keep track. I don’t see them that often, and when I do, most of what I talk about is being queer and my increasingly radical politics. I guess it wouldn’t be unsurprising to them if I were vegan, too.

Currently, Autostraddle, here’s where I’m at: I don’t eat meat unless it would be rude to refuse it. I avoid milky products as much as I possibly can, except hard cheese and butter. It’s a rare day that I go without an egg.

Given this set of rules, the question of, “So what are you going to eat?” is not terribly unreasonable. Thanksgiving food seems to be particularly difficult to remove from the dairy spectrum. There is an expectation of richness: mashed potatoes with lots of cream and butter, broccoli drenched in cheese, baked brie.

Last year over Christmas, which presents a similar culinary dilemma, I started the project of contributing my own dish to the family meal. I made a quinoa black bean salad, which is one of my favorite things to make year round (if you want to veganize the linked recipe, just substitute for the butter). I was successful in that I had a good protein option, but it wasn’t sneaky enough. “What is this???” my curious family asked, “It’s VEGAN, isn’t it?” To which I replied, “It’s just a grain! Everyone relax!”

This Thanksgiving, I’m planning even further ahead. I claimed the assignments of stuffing, mashed potatoes and roast veggies. What last Christmas taught me is that when you say it’s vegan – or lactose-free or vegetarian or gluten-free – it sits ostracized at the end of the table, feeling unappreciated, even if it is so very flavorful and delicious. If you just present it as what it is – STUFFING, instead of VEGAN STUFFING – your family will probably eat it happily and applaud your culinary skills. Whisper to any other dietarily-restricted people at the table that it’s safe.

The Walnut Stuffing is by far the most complicated of these, so I’m going to walk you through it. It’s adapted from the Vegetarian Times Chestnut Stuffing. I made it with walnuts because they were was cheaper.

Directions
1. Roast the walnuts on a baking sheet at 350°F for 8-10 minutes. Watch closely to make sure they don’t burn, and err on the side of less roasted.

2. Once the walnuts are roasted, take them out and raise the oven to 375°F.

3. If you are adding the sausage, cook the crumbles with the sage and vegetable oil in a large skillet over medium heat, until the sausage is browned (about 7-9 minutes). Drain on a paper-towel-lined plate.

4. Melt 3 TBSP margarine in the skillet, and add the onion, celery and fennel. Cook until they’re soft and translucent.

5. Dump the wine into the veggies and add the walnuts. The wine will get all the brown crusty veggie/sausage bits off the bottom of the pan, which is where lots of the flavor is. Cook until most of the liquid has evaporated.

6. Mix your veggie mixture, sausage, and bread cubes together in a large bowl. Then add the thyme and parsley, and the broth and water. Mix them all around with your (clean) hands, until everything is damp, but not too damp.

7. Put the stuffing in a 4-quart baking dish prepped with cooking spray. Dot the top of the stuffing with the remaining margarine.

8. Time to bake it! Cover it in foil and bake for 30 minutes, then take the foil off and bake it for another 30 or so minutes – until it is browned and crisp.

Pals, I really hope you make this. Everyone will be so happy. Here is the photo I took last year using the sad camera on my not-smart phone: 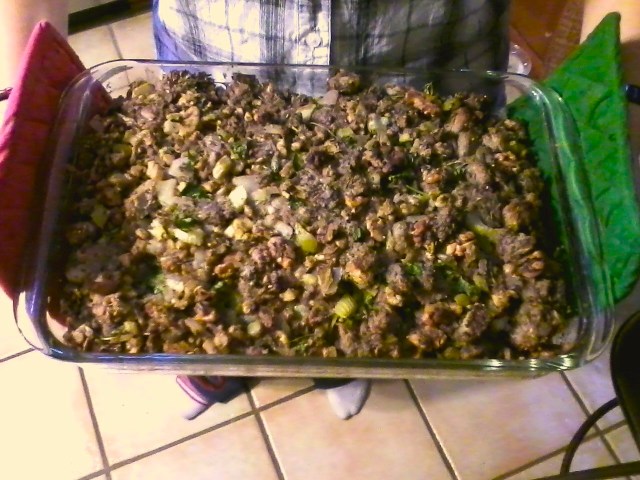 The mashed potatoes are easy enough, and I think you can do them without the steps. Wash them or peel them, depending on your skin preferences, and cut them in quarters. Boil them in a giant pot of water until they break apart when you stab them with a fork. Strain the potatoes and dump them back in the pot. Mash them. Add almond milk (my favorite milk substitute, but you do you), margarine, garlic and other spices if you want – cumin, turmeric, coriander. If you want to add a sneaky source of protein, I recommend adding kidney beans! They don’t have a strong flavor, but they’re a nice addition that blends well with the potato texture.

The roasted beets and brussels sprouts are also pretty simple. For the beets, peel ‘em and chop ‘em into very small pieces – about the size of a four-stubbed Lego. Then cut the brussels in half and take off the outer layer of leaves. Toss them all in a bunch of olive oil and minced garlic and salt and pepper and whatever else strikes your fancy – I recommend balsamic vinegar and maple syrup, if you have them handy. Roast them at 400°F until they’re easily stabbed with a fork – probably about 30-40 minutes. If you need a recipe, there is a slightly different version at Adapted Cooking. 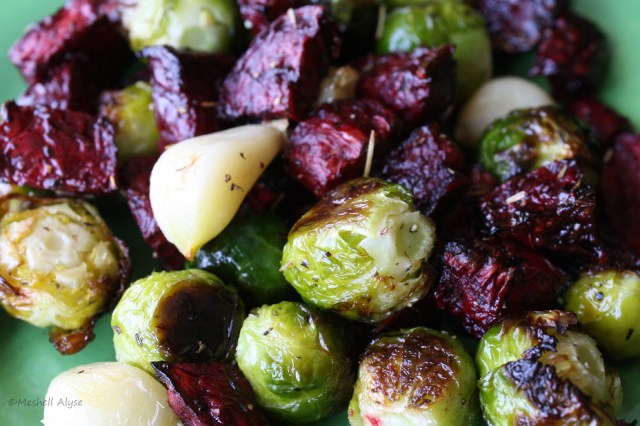 Stay tuned for how my plans pan out, and good luck with your dietary restrictions small and large!