Aren’t you so excited to go home for Thanksgiving? As a Canadian, I had the pleasure of celebrating this holiday a few weeks ago and therefore feel qualified to provide you with an insightful, well thought-out post about having Thanksgiving with a right-wing extended family when a. you’ve been a vegan for under two months and b. haven’t seen any of them since they found out you’re a lesbian. It was going to have in-focus pictures, and possibly helpful links to recipes, and be relatively free of grammatical errors.

And then I thought, “or I could live blog it on my personal blog and consequently publish this account on Autostraddle so you can all learn from my mistakes/triumphs/vegan-food preparation techniques.”

This promised to be hilarious for at least two reasons that I could  think of: 1. Most people I am related to don’t know what live blogging is, and 2. There is no better way to diffuse an awkward situation than the knowledge that everything you say and do is about to be recorded on the Internet. I mean, probably! We’ll find out. There is no way this could possibly go wrong. 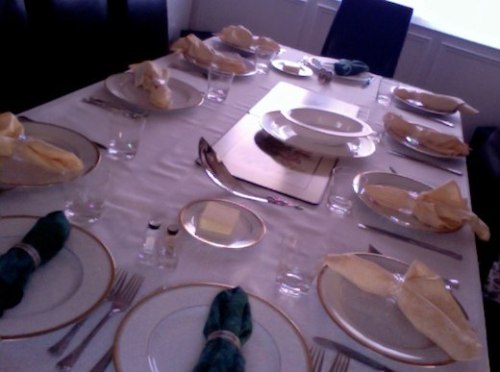 2:41 p.m.: Went downstairs with intention of getting coffee. Instead, found a giant raw turkey sitting in the sink in the process of getting its entrails removed. Decided I can live with the caffeine headache.

3:25 p.m.: Went downstairs again, this time to make part of my main contribution to the meal under the “things I can actually eat” category, which in this case is butternut squash. I have never actually made butternut squash, so I’m hoping I can do exactly the same thing I did once to acorn squash and that it will taste OK, or at least not poison anyone.

Here’s the recipe I used:

Directions
1. Preheat oven to 400 degrees F and line a cookie sheet with aluminum foil.
2. Using a sharp and gigantic knife, cut the squash lengthwise into quarters. To avoid also cutting your fingers lengthwise, lay it flat on the cutting board. If it rolls around a lot, shave off part of the outside to make a flat surface and then cut.
3. Scoop out the seeds and stringy bits from each quarter. You can rinse and bake/eat the seeds separately, but you can also throw them out.
4. Place the pieces of squash on the cookie sheet with the rind down. Using a pastry brush or a spoon/your fingers, coat the surface of each piece with olive oil and maple syrup (if you don’t have maple syrup, brush each piece with olive oil and sprinkle with brown sugar).
5. Cover squash lightly with aluminum foil and bake for approximately 45 minutes or until tender (use a fork to test).
6. Let stand at least five minutes and brush with additional maple syrup. Serve.

3:27 p.m.: Just attempted to cut squash with a bread knife. Squash currently on floor. Grudgingly asked for help from my father, whose attention is divided between washing dishes, watching TV, and singing something that sounds like it might be but definitely isn’t Italian opera.

4:02 p.m.: Squash preparation is on-going. Basic small talk about school ensues. Explanation of modified milk ingredients and why I can’t eat them, versus the squash and the stuff on it (brown sugar and olive oil), which I can.

4:10 p.m.: Squash finally makes it into the oven. We discover we are out of olive oil and that the apple pie someone brought has expired. My father is sent on a mission to acquire more olive oil, pitas, and a possible alternate dessert item from the grocery store.

4:18 p.m.: One aunt, one uncle, my grandfather and my brother start playing Euchre at the kitchen table. My laptop is now positioned by the fridge instead of upstairs in the office, which makes updates a lot more convenient but which is creating a lot of whipped-cream-in-the-vicinity-based anxiety.

4:19 p.m.: Cutting vegetables for what will be my main dish. This recipe was loosely adapted from a recipe for gluten-free pizza from Gluten Free Goddess. Here’s what I did:

Ingredients
yellow pepper
orange pepper
asparagus (if you don’t like asparagus, sub with snow peas or celery)
white mushrooms
campari tomatoes (bigger than grape tomatoes but smaller than plum tomatoes. If you can’t find/ afford them, sub with any smallish, ripe tomatoes)
1/4 red onion
2 tbsp olive oil
1 tsp minced garlic (or to taste)
1 tsp each of some or all of the following: thyme, oregano, basil
pinch of sea salt

Directions
1. Preheat oven to 400 degrees F. Cover cookie sheet with a layer of parchment paper.
2. Wash vegetables, cut into large pieces, and combine in large bowl. Leave the asparagus mostly whole but remove the bottom part of the stems. Quarter the tomatoes, scraping out and discarding the goopy bits. Finely slice the onion. All amounts are approximate: if there are more people, use more vegetables.
3. Drizzle olive oil and add herbs, garlic, and salt. Toss well to coat.
4. Place vegetables evenly on cookie sheet.
5. Bake for 15 to 20 minutes or until crisp but tender. If you can’t tell if they’re done, it’s better to take them out early.

4:25 p.m.: Have enlisted my mother to wash vegetables. My childhood self feels that the tables have turned! My current self is appalled at how much dirt is on the mushrooms. Also the card game seems to involve a lot more yelling than I remember the last time I played.

4:32 p.m.: Dad returns from the grocery store with a litre of olive oil, the pita, and raisin buns. You win some you lose some.

4:44 p.m.: Fun with sharpening knives. One cousin and her new boyfriend arrive followed by the two remaining cousins.

4:54 p.m.: The squash comes out of the oven. Is hopefully supposed to look like that.

5:08 p.m.: Vegetables ready to go in the oven. Conversations about life after school with cousins. “Your hair is so blond now!” This is because it is. And for ten minutes yesterday, it was also yellow. 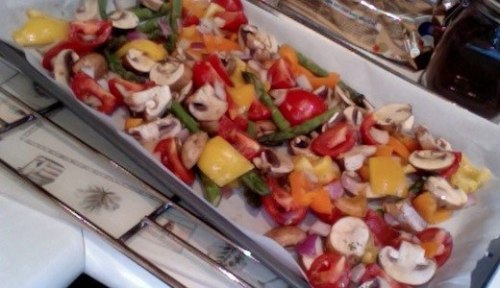 5:09 p.m.: Get caught taking a picture of my vegetable dish with iSight. So far no one has asked what I’m typing. Oh, wait. One of my cousins is sort of trying to look at my screen. But still not asking.

5:45 p.m.: Someone brings up wedding dresses. My brother says he’s planning to get his (presumably, he means his wife’s) from Value Village and tell people it’s grandma’s. Because probably it belonged to someone’s grandma. I plan for a moment to drop a comment about wearing a tux but one doesn’t happen and I don’t force it.

5:48 p.m.: We talk self-defense. My mother says in a class she took when she was 25, they said in the case of a male attacker, just go for the crotch. I am not sure this is correct. She attempts to demonstrate on my dad, who is not into it. We discover that if you are short, this is probably not a good defensive strategy anyway. We Google breaking noses instead. I tell people about my trips to a farmer’s market and the resulting hilarity (read: shoulder pain) that sometimes ensues. I talk a lot about eggplant. Someone asks, but I can eat fruit right? Right.

5:51 p.m.: One of my cousins works in a dealership and gets to meet hockey players. Someone says she should marry one for season’s tickets.

5:52 p.m.: Finding a way to serve the squash is about to be a challenge since no one can figure out where all the spoons have gone. This is not as big a deal as the volume in the kitchen would indicate.

5:55 p.m.: The conversation is now on copyright law. Something interesting is happening with the turkey on the stove, I have no idea what but it seems gross. The entrails are making a reappearance. Probably this means dinner is happening soon, I am just going to look at my vegetables. I explain the typing thing, finally, even though no one has asked I just feel compelled to.

5:59 p.m.: Now we are talking about gambling. And casinos. And cards. The turkey is being eviscerated and is bleeding celery and bread stuffing. Someone just referenced the size it would be as the size of a small child. By someone I mean me. Whatevs. Really I’m only vegan cause of the allergy/convenience thing, I swear.

6:07 p.m.: The vegetables are out of the oven. They look a little dubious. People keep not getting that this is my turkey, and it is getting burnt. The actual turkey, meanwhile, has now taken over about a third of the counter and part of the floor.

6:12 p.m.: Dinner. Suspect typing at actual dinner will not go over well.

7:19 p.m.: Dinner is over. Topics of conversation during dinner include: what people are doing with their lives, the tiny town my grandfather, mother and aunt are from and its a. small population and b. disturbing lack of diversity of any kind, what you can do with a degree, what happens when you get a degree but get an email the next day telling you it’s void because someone spelled something wrong on it and how you get a new one, and how awesome my vegetable dish was (very).

7:21 p.m.: Dessert. Dessert is pumpkin pie. My mother looked at the ingredients on Crisco and realized that it has soy in it, which I can’t eat, and made her crust with lard instead, because lard has no soy or milk ingredients. The problem with this is that lard has animal ingredients, which she only realized after it was made. I give her points for remembering the soy thing in any case. Instead I am eating apples with peanut butter on a really fancy plate. This is exciting because I have not eaten peanut butter in days (three).

7:23 p.m.: Am now typing at the table with one hand and trying to also participate in the conversation. It is a testament to the dynamics of my family that no one thinks this is weird.

8:02 p.m.: Talk with one of my cousins (the one with the boyfriend) about how cool her life is etc. She is working to be a teacher, has awesome hair, liked my vegetable dish (!), etc. She is also a former women’s studies major. I make fun of people in my feminism and media class with her, she makes fun of the fact she did some of the classes in her degrees backwards and once spent two hours listening to first year kids utterly fail to understand the syllabus. Good times. I completely avoid telling her the reason I took my only women’s studies department class ever (girls) (the feminism/media class is communications), which is why the conversation is a success.

8:28 p.m.: Everyone leaves. My uncle shakes hands with my brother and father but hugs my mother and I. Because my brother is a guy, he says. I make him shake my hand too/anyway, on general principle.