Grab your graham crackers and get your ‘mallows ready, because it’s that time again: S’MORES TIME! Tomorrow is August 10 and that means it’s National S’mores Day, also known as The Perfect Pointless Holiday, which joyfully comes around once a year because that’s how annual holidays work. I truly believe that the mere existence of such a day must be because there really is a Lesbian Goddess and she knows that in order to bring about the revolution it’s necessary for us to eat the gooey melted campfire snacks of our youth at least once a year. Gosh, isn’t the world a magical place?

Last year I presented you with four different recipes to celebrate this stupendous holiday but this year I decided to scale it back and simply present one really high quality recipe. Don’t worry, I think once you get this bad grrrl in the oven you won’t be disappointed (but if you wanted more variety you should just revisit last year’s post, that’s totally allowed).

Recipe by The Girl Who Ate Everything 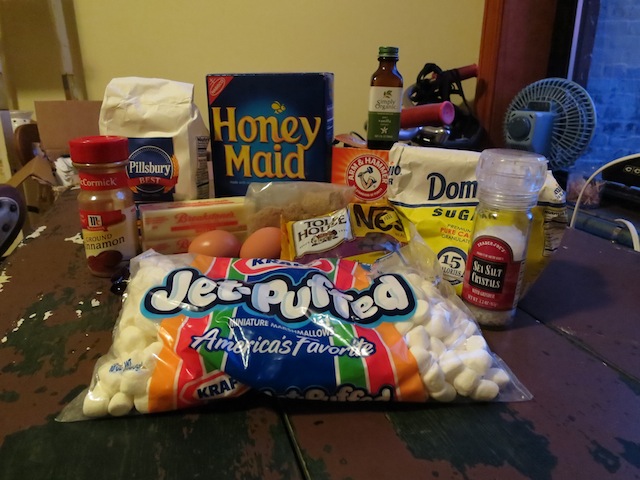 1. Preheat your oven to 375 degrees. Take a baking tray and line it with parchment paper if you’re fancy or tinfoil if you’re me, and lay out your graham cracker squares on the tray. The squares should be touching (see image for visual proof) and you can use as many as you want. They’re the base of these bars, so the amount of graham crackers you use is going to determine how many cookie bars you have at the end. Anyway, once you’ve done that you can set the tray aside and forget about it for a minute. 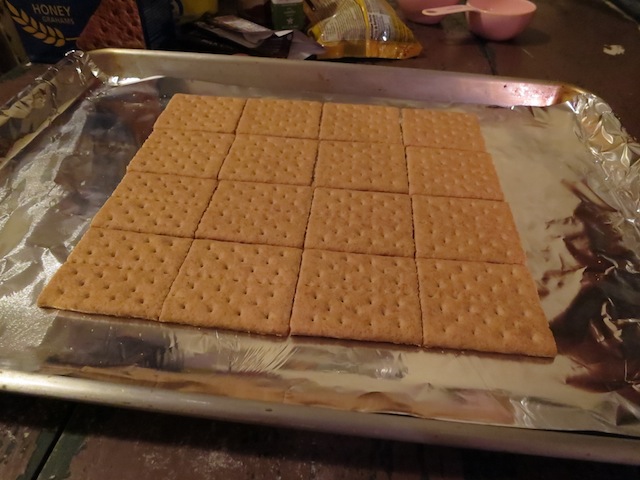 2. Put the flour, baking soda, sea salt, and cinnamon in a medium sized bowl and whisk everything together. I think, potentially, next time I make this recipe I would substitute half of the flour for crushed graham crackers instead, just to make the recipe extra s’mores-like, ya know? But also it was pretty perfect as is so maybe I shouldn’t fuck with a perfect thing.

3. Take the butter (which I always throw in the microwave to melt because I never remember to leave it out to soften and it has literally never ruined a recipe ever) and both the white and brown sugar and mix them together in another bowl. The recipe suggests an electric mixer but we can’t all be fancy like that, and this is one of those times when a fork really will do the trick. Which is the opposite of that time I tried to whip egg whites into meringue without the help of an electric mixer, but that’s a sad tale for another time. Add the eggs (best part!) and the vanilla to the butter/sugar mixture and stir well. 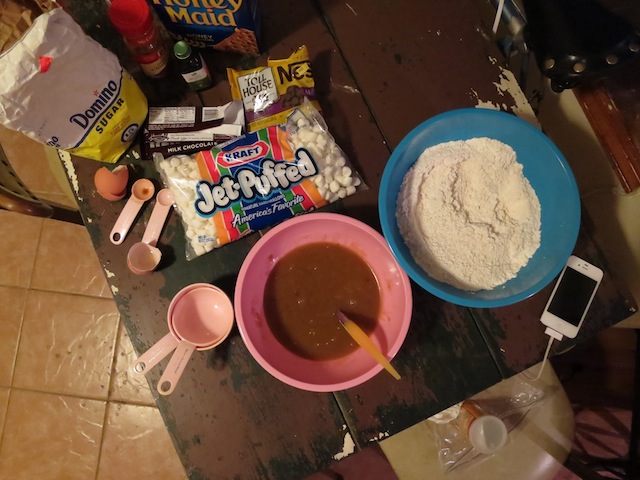 4. The original recipe suggests adding the flour mixture to the butter mixture and combining on low speed, but remember how I don’t have an electric mixer? Right. So it just seemed to make more sense to add the butter mixture into the flour mixture and mix all that stuff together, mostly because the flour mixture was in a larger bowl and I worried about overflow. If you’re confused, just know this: you’ve gotta get all the ingredients in both bowls into one single bowl, and together they are going to form a delicious cinammony cookie dough situation, and you’re going to want to eat it all right away but you just can’t because then your dessert will never self-actualize, okay?

5. Add the chocolate chips and the mini marshmallows! Every baking recipe ever will tell you to use semi-sweet chocolate chips but guess what I love milk chocolate, so I always ignore them and just follow my heart and it always works out in the end. You can use whatever kind of chocolate chip you want, is what I mean. You could even use a peanut butter chip! I bet that would be delicious. Also, a small note: It was sort of tough to incorporate the marshmallows into the dough – they kind of didn’t want to mix in? But just be gentle yet firm and kind of smush them in there with your hands and everything will be just fine. 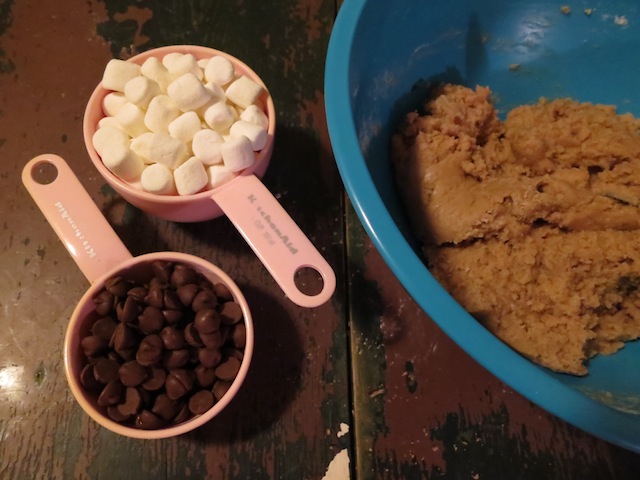 chocolate chips and mini marshmallows and cookie dough, oh my

6. Now comes the fun part! You’re going to grab your baking tray with the graham crackers that has been sitting patiently waiting for you to call upon it to fulfill its duty in this recipe, and you’re going to put tablespoons of your delicious dough onto the graham crackers! This is the part of the recipe where I got kind of confused – it recommends that you place tablespoons of dough on the graham cracker based about 1 – 1 ½ inches apart, and the original baker says she averaged about 1 ½ tablespoons of dough per graham cracker. I think this is so that when the cookie dough bakes and spreads out it covers as much graham cracker surface area as possible and really holds everything together, BUT I don’t understand why you can’t just place a big ball of dough in the center of each graham cracker. The cookie will still spread when it bakes and you’ll still get a cohesive bar at the end. Anyway, I dunno. I’m just sharing all the knowledge I have. You’re gonna have to make your own decision on this one. I trust you. (Oh, and this may seem obvious, but if you want the cookie part of your bar to be thicker you should use more dough, if you want it to be thinner you should use less.) 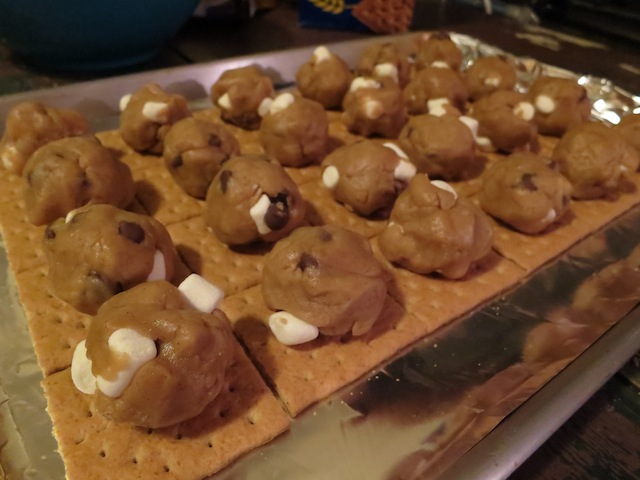 did i do this right? unclear.

7. Pop this baby in the oven and let it bake for a little while. The original recipe says 5 minutes but I waited 10 minutes because nothing was really happening after 5. Possibly because I used so. much. dough. I just wanted really thick gooey bars! Sue me.

8. After however many minutes you can handle, take the tray out of the oven and press Hershey’s bar pieces on top of the sort-of-cooked-still-very-melty cookies. I did one piece per cookie but then added a few more for funsies. I also decided to be crazy and add some extra mini marshmallows in the places where the cookies hadn’t spread yet. I was worried that because of my confusion in step 6 the dough wasn’t going to spread all over the graham crackers and I panicked, is basically what happened. I think even if I hadn’t added the extra marshmallows everything would’ve been okay, but then they were a fucking delicious addition so I vote throw them in no matter what! Be wild. 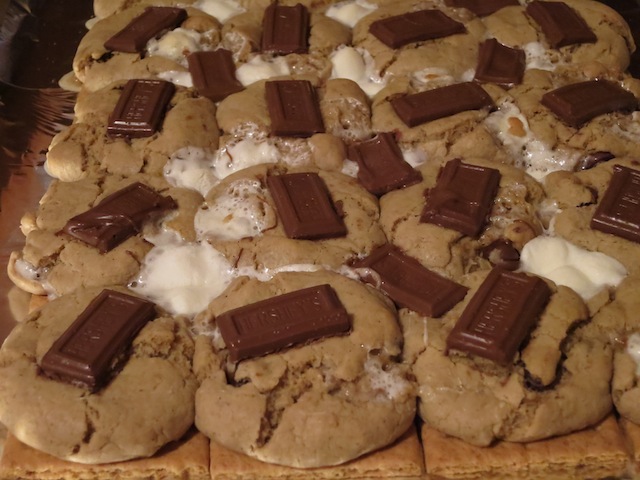 9. Put the cookie bars back in the oven and bake for an additional 5 – 10 minutes. I’m really paranoid about burning cookies and making them crispy instead of gooey so I probably took mine out a little too soon. The recipe said “they will be done when the edges begin to turn golden brown” but oh my god do you realize the pressure of trying to figure out when exactly the edges are beginning to turn and is it too late and have you destroyed everything pure and good on the planet are the cookie bars ruined is National S’mores Day totally fucked before it even begun oh god. I mean, maybe you could even leave them in for 12 minutes, or 15 minutes, who knows, I can’t really tell you that. It’s not my place to say. Just don’t burn the damn cookies.

10. Remove the cookies from the oven and let them cool. Apparently if you’re a grown up you might have a wire rack to cool them on but haha, I let mine sit on the counter for a while. When they’re totally cool, cut them with a sharp knife (follow the grooves of the graham crackers when it comes to the cutting, remember, the graham cracker is your base, you need to keep it whole so everything doesn’t fall apart, I think this might be a metaphor) and then stack them on a plate and take a million Instagram photos and present one to your roommate because it just so happens to be her birthday and then eat four and then wish yourself a happy damn national s’mores day because babe, you deserve it. 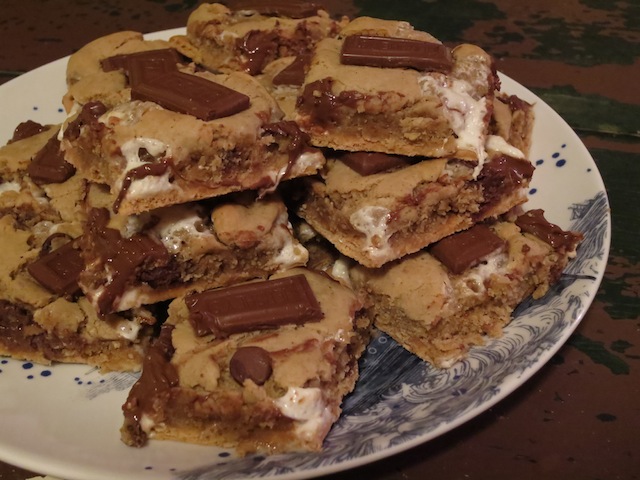