In celebration of DOMA’s overturn, Felicia Day’s romance book club read Tipping the Velvet by Sarah Waters in July. The Google Hangout discussion streamed live on Tuesday evening and – like that month of partying in-anticipation-of and raucous-celebration-after gaining new civil rights – it was spectacular.

Also, the book club’s name is “Vaginal Fantasy,” and this is their logo:

Vaginal Fantasy: “A gathering of wine, women and smut as they discuss and dissect a new romance novel each month.”

Per usual, Felicia was joined by her “vadge fan” co-hosts, Bonnie Burton, Kiala Kazabee and Veronica Belmont, a.k.a. the most hilarious, smart and sexy group of geek women to ever grace YouTube/the internet at large. This month, they also had special guest star Hannah Hart, the inimitable star of “My Drunk Kitchen” and “Words With Girls.” Adorably, the group started by going around in a circle to show-and-tell their wine. Then they launched into a chatty, hour long discussion on Tipping the Velvet! 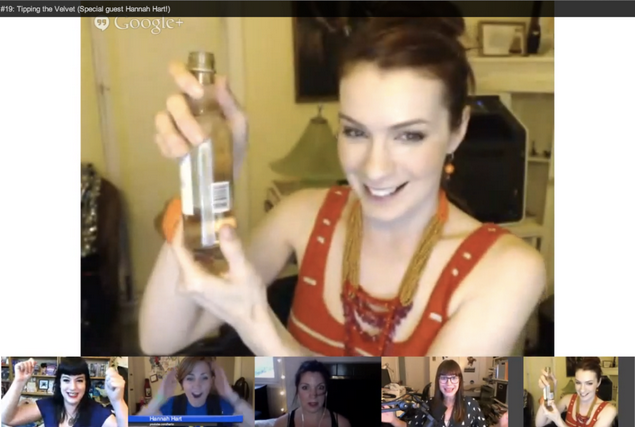 Felicia shows off her bottle of tiny wine, and her co-hosts react appropriately.

If you are one of the few queer ladies who doesn’t already have Tipping the Velvet as part of their lives, here’s a description:

The heroine of this audacious first novel knows her destiny and seems content with it. Her place is in her father’s seaside restaurant, shucking shellfish and stirring soup. At night she often ventures into the nearby music hall, not that she has illusions of being more than an audience member. But the moment she spies a new male impersonator, still something of a curiosity in England 1888, her years of innocence come to an end and lifetime transformation begins.

Throughout the course of Vaginal Fantasy’s discussion, Veronica discovers fanfiction for the first time, Bonnie talks about her feelings on being bi, and Hannah reminds us how awesome Emily and Naomi were in Skins seasons 3 and 4. It’s great! Really really great! And since I don’t want to ruin it for you by giving a play-by-play rundown, you should just watch it.

For more fun, previous episodes are also available on the Vaginal Fantasy website. Past books picks include The Cthulhurotica Anthology by Carrie Cuinn, White Trash Zombie by Diana Rowland, and Succubus Blues by Richelle Mead. (They’re mostly a sci-fi/fantasy romance book club. This is the first piece of lesbian literature that they’ve read, but sometimes not all the characters are human, so I think that’s pretty queer.)

I don’t know about you, but my plan for the day is to listen to all the past episodes and think about how to best incorporate the Vaginal Fantasy logo into my wardrobe. Do I want it emblazoned across my chest? As a hat? Maybe a tattoo? There are just so many wonderful options! 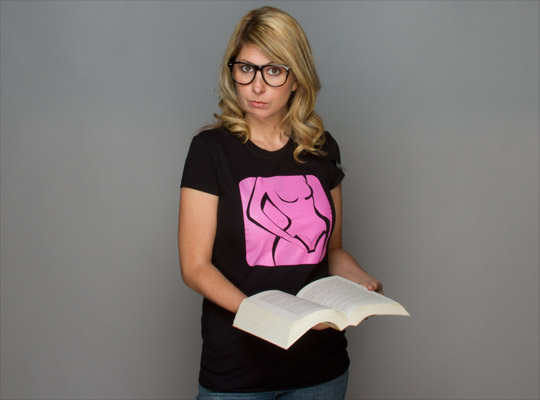 Via Geek and Sundry