Welcome to the fortieth installment of  Queer Your Tech with Fun, Autostraddle’s nerdy new tech column. Not everything we cover will be queer per se, but it will be about customizing this awesome technology you’ve got. Having it our way, expressing our appy selves just like we do with our identities. Here we can talk about anything from app recommendations to choosing a wireless printer to web sites you have to favorite to any other fun shit we can do with technology.

In your childhood, did your mom wake up you at weird hours on school nights to watch meteor showers because they were more important than 2nd grade? Or was that just my mom? Either way, we’re all now Adults and we can get up (or stay up) to watch the meteor shower of our own volition, and with our girlfriends/best friends/dogs. The Perseids 2013 meteor shower will be visible in the northern hemisphere (approximately 50 meteors per hour) and the southern hemisphere (about 1/3 of that) this weekend and early next week, with a peak sometime between August 12 and August 14th (some are even saying two peaks within that time frame). The Perseids can claim the moniker of “Old Faithful of Meteor Showers” because we can see them every August.

What Is a Meteor Shower?

Dust. Rocks. I know, when I put it that way, it doesn’t sound as pretty as it looks. Sorry! But hey, they’re pretty anyways. And throwing a rock and making a wish doesn’t have the same romantic mystique as catching a glimpse of a shooting star to jumpstart your deepest desires.

Where Does This Particular Meteor Shower Come From?

If you didn’t watch that entire video up there (and I highly recommend it, they’re nerd-funny at Universe Today), the Perseids come from the debris left behind by the Swift-Tuttle comet (which earth won’t see again until the year 2126). We come into its orbital path, and the Perseids are debris left over. So what I’m saying is that earth runs smack into some space waste and we get meteors!  In terms of practicality – as in, where in the sky are these meteors coming from? – they’re called the Perseids because if you trace their tails back, they all are radiating out from the constellation Perseus. 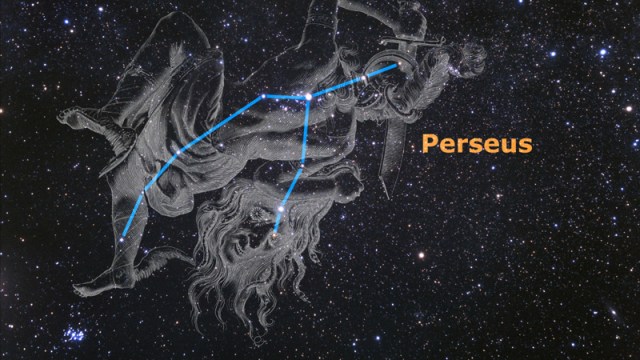 Still can’t find Perseus? Don’t worry, you can use this app to help in the moment. But also never fear – you’ll be able to see meteors all over the sky, because generally there’s just that damn many of them.

How Can I See This With My Eyeballs?

You don’t need any special equipment to watch this meteor shower, and because it’s warm you won’t even need a coat/mittens/blanket (can you tell I really did spend my ENTIRE childhood outside staring at the sky?). But you will need nice, dark sky far away from large light sources. If you live in a major US city with a lot of light pollution, check this article because there may still be a place you can go to see the meteors. Try to get a viewing spot with a clear, unobstructed view of the sky –  there’s nothing worse than a poorly placed tree. I recommend grabbing a reclining camping chair/deck chair or a blanket, because you’ll be looking at the sky for quite some time and it’s, literally, a pain in the neck to do it standing up. Make sure you wait at least 20 minutes to see your first meteor – it takes our eyes that long to adjust.

If you bring binoculars, you might be able to catch a glimpse of a meteor’s smokey tail.

If you’re planning to photograph the Perseids, don’t just bring your DSLR: make sure you bring a tripod and a cable release, as well an extra batterie(s) – the long exposures necessary to capture meteors really eat up battery power. If you do manage some good shots, you should email them to me because I would genuinely love to see them. 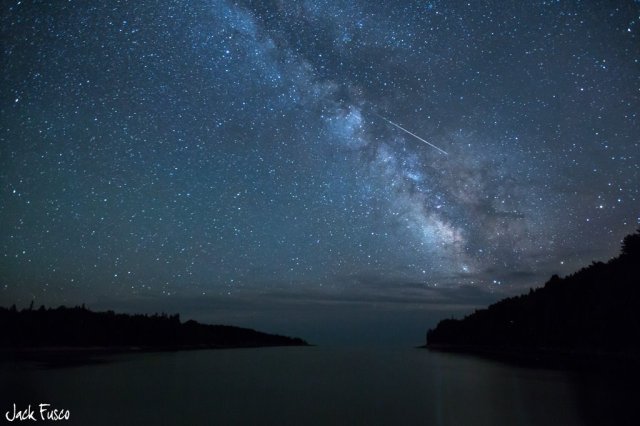 Perseids as seen from Acadia National Park, Maine, by Jack Fusco, via EarthSky

I want to reiterate that predicting the activity of a meteor shower is a bit like predicting the outcome of a well-written novel: there’s generally a lot of twists, turns and surprises. So check every night – the later and darker it gets, the better shot you’ll have at seeing meteors. Consensus says that for the Perseids, early morning is best (think 4 am). I myself will be watching well into the wee hours, and then I’ll probably nap and get up again around 4 or 4:30 am.

What Beer Will You Be Drinking With The Experience?

I’ll be watching this meteor shower with one of my best friends (I’ve known her since elementary school!) and we will be drinking River Horse Tripel Horse. How about you?