Most people know that falafel is great. It’s fried, it’s crunchy, you can eat it with hummus. But not everyone knows about fava beans, which are also great, but a little less popular. Fava beans look like giant lima beans and are fucking delicious. They sometimes take a little more work, and it’s harder to find them canned like chickpeas, but they are, if I may speak plainly for a second, the King of Beans. They’re a great substitute for chickpeas in falafel or hummus if you feel like changing things up, and I’m obsessed with them, so obviously that’s what I like to use for my falafel. An equivalent amount of chickpeas would be fine, though.

Also, although I’m an advocate of soaking and cooking dried beans in general because it’s cheaper and you get better-tasting beans, this is an instance where soaking from dried is actually pretty necessary. Falafel seems like something you should be able to make from cooked beans, but I’ve tried it before but ended up with a bunch of falafel patties dissolving into hot oil, which really just isn’t the same. Trust me on this one, and you’ll be living the high life, up to your eyeballs in falafel.

recipe based on this one from Food Republic 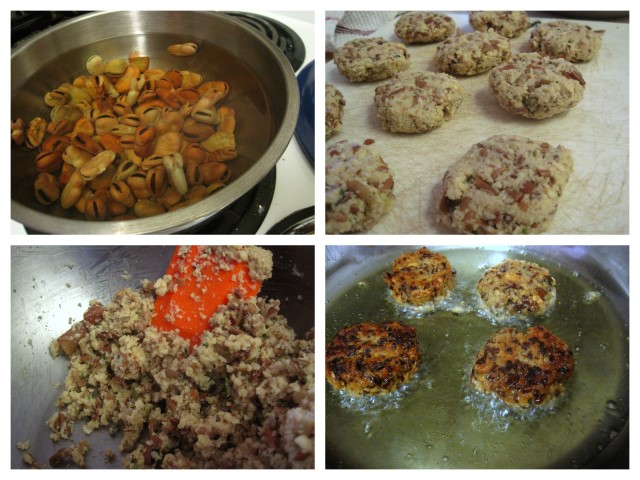 1. Put the fava beans in a bowl, and soak them in A Serious Amount of Water. It should be a large bowl, in case that wasn’t clear. It should also be at least 24 hours before you want to actually make your falafel. Sorry! Just queue up a lot of episodes of Sister Wives or something for the next 24-hour period.

2. Are your beans soaked? IF YOU KNOW WHAT I MEAN. Anyways, put pretty much everything except the salt in a food processor. (I also added garlic because, you know, GARLIC 4 LYFE, but you do you.) Don’t have a food processor? SHOULD HAVE THOUGHT ABOUT THAT BEFORE MAKING FALAFEL, CHUMP. Just kidding, I made falafel with a mortar and pestle once because it was worth the effort.

3. Run the food processor until the fava bean mixture is broken down enough that it will stick together, but not so much that it’s hummus. I feel like you’ll figure it out.

4. Let sit for a half hour. I don’t know why. It’s just what the recipe says. Disobey at your own risk.

5. Add salt, however much your little heart desires, and some pepper or something if that’s what you’re into. Mix well, and in the meantime, heat a half inch or so of oil on the stove. I set my electric burner at “somewhere between 4 and 5.” You  definitely don’t want your oil to smoke, but if you drop a tiny pinch of falafel mixture in there, you want it to sizzle and be surrounded by tiny bubbles. (If you’re really committed to Falafel Realness, you can go for legit deep-frying and fill some kind of container with a ton of oil and use a thermometer and stuff to measure whether it’s the correct temperature. We’re not going to go into that here, because that shit cray.)

6. Form your falafel mixture into roughly golf-sized balls; I like to flatten them a little into discs so that I can feel more confident they’re cooking through. When your oil is hot enough, put a few falafel in at a time, and let cook for 3-6 minutes on each side. I feel like you’ll know when they’re done. Except maybe don’t get involved in any text message conversations while you’re frying them, because they might get burnt that way. Just fyi. Anyways, when they’re browned and crispy on each side, take them out of the oil and put them on a plate layered with paper towels, and then put the next batch in. You may need to top off your oil once or twice.

7. Congratulations, you’re done! Don’t forget to turn off the burner. Also, they’re very hot, don’t touch yet. Now you can eat them in a pita, on their own like popcorn chicken, or like I did, in a giant sexy salad. I recommend some tahini or tahini-based sauce. Mazel tov, you have some falafel! 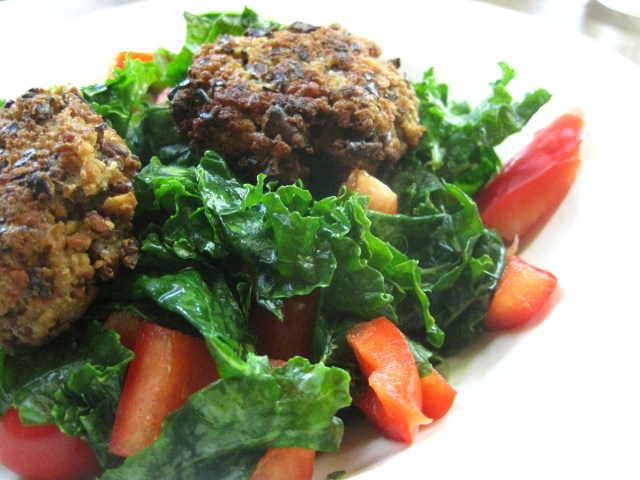