How good is your gaydar? According to researchers at the University of Washington, it might be better than you think. Using a snap judgement test, they found that respondents judged the sexual orientation of faces right at a statistically significant rate higher than chance. The study, which was published yesterday at PLoS ONE, a peer-reviewed open-access (which means you can read it even if you don’t go to school!) journal, found that participants were better at determining the sexuality of women (67% correct) than men (57%) and that those incorrectly-guessed male faces were pegged as gay more often than female faces.

The pictures shown to respondents were greyscale copies of cropped faces taken from the Facebook profiles of people who self-identified as gay or straight. If your methodology alarm bells aren’t going off right now, your gay lady alert system should be. Raise your hand if you’ve ever been, known or dated someone who was “straight” online and totally gay in real life. Or if you’re friends with a girl who thinks it’s a hilarious joke to be “in a relationship” with another girl on Facebook. That’s not the only thing wrong with the study; besides reducing the complexities of sexuality to something entirely binary, the researchers only selected “photographs of White-appearing individuals…to maximize consistency across faces.” 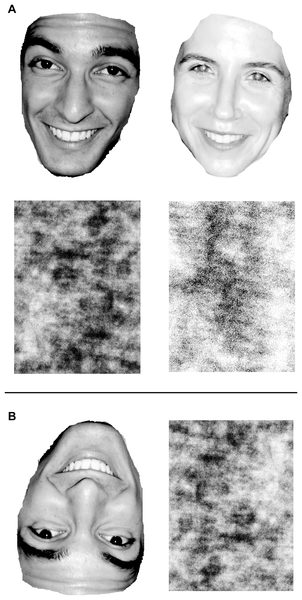 Excluding people of color wasn’t the only length they went to to preserve consistency across the sample, the authors were also careful to select only pictures of people who were not wearing makeup, facial piercings or glasses. All this attention to controlling factors makes sense scientifically, but it also points to an assumption–a BIG assumption made on the part of the researchers–that sexuality is something can be visually identified and also, again, binary. Operating under the belief that gay people look objectively different from straight people is a confusing and potentially problematic road to take. It completely erases the existence of people who fall somewhere in between gay and straight and treats sexuality as something that exists in some kind of pre-determined vacuum–one where gender, gender presentation, race and sexuality have no bearing each other.

The researchers themselves acknowledge that the study may not be consequential in the real world; in their discussion of the results, they indicate that there’s plenty of room to research “the external validity of these effects” and find out if “snap judgments of sexual orientation from faces occur in real-life settings.” I don’t know about you, but when I’m trying to figure out if some chick’s gay, the distance between her eyes isn’t really the first thing I look for.

And believe me, I look. In my tiny corner of the world, sexuality matters. When I’m looking at people, I look for clues–haircuts, glances, clothes, fingernails, movements (all those things left out of the study)–so that I can figure out who’s okay and who could be bad news. Context is everything; how we choose to present ourselves to the world is very significant, and that’s what’s left out here. What I wonder is whether it matters to the respondents in the study. Were they gay or straight? Liberal or conservative? Comfortable with queerness or uneasy? Those things could contribute at least as much to how someone identifies another’s sexual orientation as what the sexual orientation at hand actually is.

It’s precisely the impreciseness of social interactions that makes all these things meaningful when studying sexuality. For example: the authors suggest that, due to influences from the media, we should have expected the respondents to have more “false alarms” with women than men, but the results actually indicated the opposite. Since we also know that 19 of the 24 respondents were women, why not see what happens if we added more men to the study? Or what happens when everyone who answers is gay?

I guess to me, knowing whether or not we’re able to determine someone’s sexuality by looking at thier face is so much less important than finding out why people think and act the way they do. At the end of the day, what’s the real purpose of studying how good everyone’s gaydar is? At best, it makes us aware of the people around us and at worst, it perpetuates stereotypes. At one point in the discussion, the authors argue that their research could be used to argue for protection against discrimination since “minority sexual orientation is tacitly inferred from aspects of personal appearance that are routinely available for inspection,” which is a noble (if slightly paternalistic) goal. I understand that I’m coming from an entirely different viewpoint from the authors of the study, but I can’t help but wonder why this is the kind of research that continues to be funded. Bring me your radical research questions about the intersectionality of race and gender. Find me a school who wants you to discover how to get homes for all those homeless trans* kids. Until then, I’ll keep asking questions.