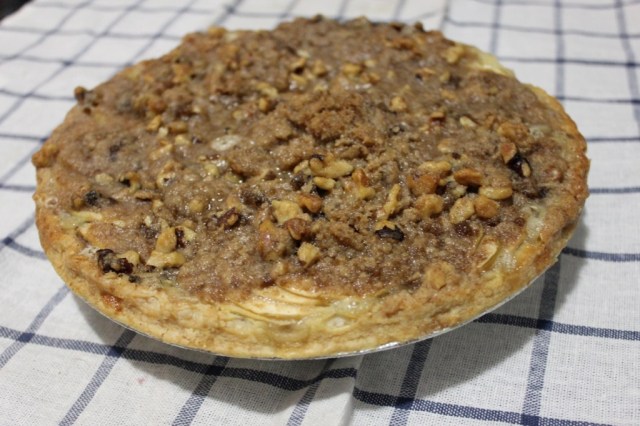 I wish I could have given you an original Thanksgivingukkah creation, à la Stef’s sweet potato vegan double down latke. Sadly, a) I’m not Jewish, so I’ve never celebrated Hanukkah, and b) I’m notoriously hit-or-miss with the whole cooking thing, and I just don’t think I have it in me to come up with something delicious on the fly. (Last weekend I tried to make my girlfriend pancakes in bed from scratch and wound up with greasy, pale cylinders of abject disappointment. We pitched the batter into the trash and she very benevolently lied to me about how it’s the thought that counts.)

Now, some people might say that the reason I so frequently bite the dust in the kitchen is because I’m lazy, disorganized, can’t take direction and have issues with authority. Those people suck. Personally, I prefer to think of it as a philosophical misunderstanding. When I’m cooking, I like to maintain a sense of whimsy in my kitchen; consequently, I’m all about eyeballing measurements, putting in creative substitutions, and dropping everything when the mood strikes for dance breaks, puppy cuddling, and artistic phone photography. This approach actually works really well for stirfry, salad, soup and recipes written by Mark Bittman. It tends not to work very well for baking. The major, notable exception: Amish apple pie with streusel!

With Amish apple pie with streusel, the base ingredients are just so tasty that there’s really no bad way to combine them. Even if you stray from the ingredient list a bit, the recipe (which I originally found at Cooks.com, I think) is very forgiving. There’s plenty lot of room for freestyling/fuck ups, and in the end, you’re still going to wind up with something that tastes amazing. Let’s begin. 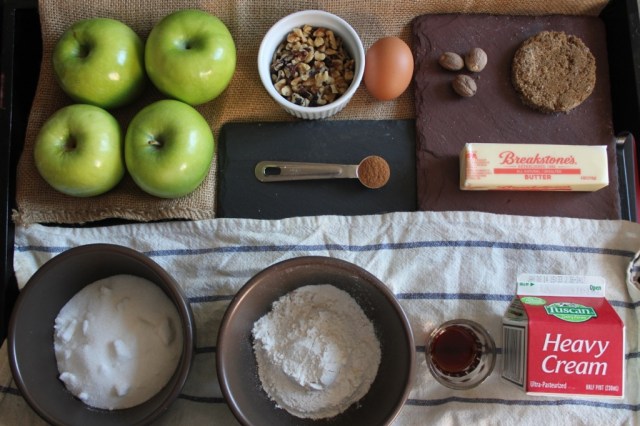 Here are the ingredients you need.

For the pie filling:

It’s really easy to make your own pie crust if you want to, but it’s not a big deal if you prefer to buy it ready made. The crust is merely a structural element in this pie; the streusel is the star of this show, followed closely by the apple filling. If you decide to make your own pie crust, do it now; otherwise, let’s move on to making the streusel. 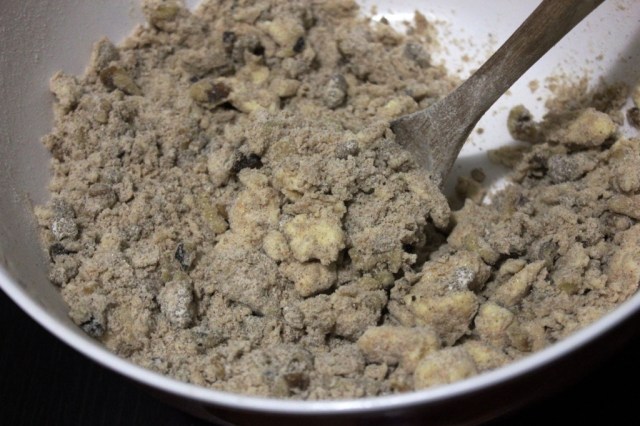 To make the streusel, mix the sugars, flour, cinnamon, nutmeg and pinch of salt. If you’re missing any of the spices, just do the best you can with what you have; in a pinch, I’ve subbed in all spice, cloves, Chinese five spice, and coriander, and nothing terrible has happened yet. Nutmeg and ceylon cinnamon definitely work best, but you can get by without them.

While the original recipe calls for a food processor, I really hate getting extra cookware dirty when I know I’m just going to have to clean it later. A bowl and a spoon have always worked  fine for me, so I’m going to recommend the same to you. Put the ingredients in a bowl and stir it together until it’s all sort of homogeneous and the same color. Roughly chop your stick of butter and give it a few enthusiastic stirs to mix it in. Add the walnuts. The whole thing should be crumbly and dry-looking in the end.

When you’ve mixed the streusel to your satisfaction, set your it aside, preferably somewhere that your dog can’t stick his face in it. It’s time for you to prepare the apple filling. 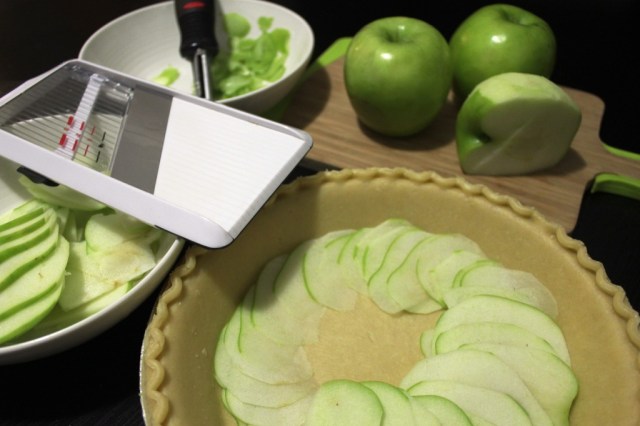 At this point in the process you have the choice to either peel your apples or to leave them exactly as nature intended. Peeling pro: the texture is a little better when the apples are naked, because mouthfuls of apple skin are unpleasantly chewy. Peeling con: the peel is pretty and contains nutrients; also, removing it puts another 5-10 minutes of work between you and hot apple pie. My approach is to take a quick pass down the side planes and not worry about the tops and bottoms. But it’s going to turn out incredible either way, so your call. Peel them or don’t. Then preheat your oven to 350 degrees.

Coring the apples is also recommended in the original recipe, but I always feel nervous about the amount of fine motor control required to accomplish this without cutting myself. So I usually slice until I get to the middle, then turn the apple and repeat from another side. As long as you don’t put the seeds, stem, or tough center bits in the pie, you’re golden.

However you choose to do it, cut the apples into thin slices and put them in the pie shell. I used a mandoline and stacked my slices in a spiral pattern here (whimsy!) but really, it doesn’t matter how they look; they’re going to be covered in scrumptious streusel soon.

Okay, last couple steps before we get this in the oven. In a small bowl, mix the dry ingredients (sugar, flour and cinnamon). Beat the egg in a medium bowl then add the cream and vanilla. Pour the dry ingredients into the wet ones and blend. (Also, FYI, it seems to be okay if you forget and just combine them all at once. I’ve done it plenty of times and have never noticed any ill effects.)

Pour the cream mix over the apples. If you find that it doesn’t all fit without leaking, I recommend that you take some of the apples out, or don’t use all of the cream. Because once it starts dripping it never stops. You  wind up with a scorched, smoking mess at the bottom of your oven, and no, it doesn’t just burn off. A baking sheet beneath the pie tin can be helpful in this situation, but only as a preventative measure.

Bake your pie for 20 minutes, then pull it out. Find your streusel (has your dog eaten it yet?) and sprinkle it over the top of your apple slices. You’ll want to take the pie out of the oven to do this, because again, dropping too many things on the bottom of your oven = burny death. Once you’re all set, pop that sucker back in and bake for another 20 minutes. The end result should have a puffed, golden brown top. 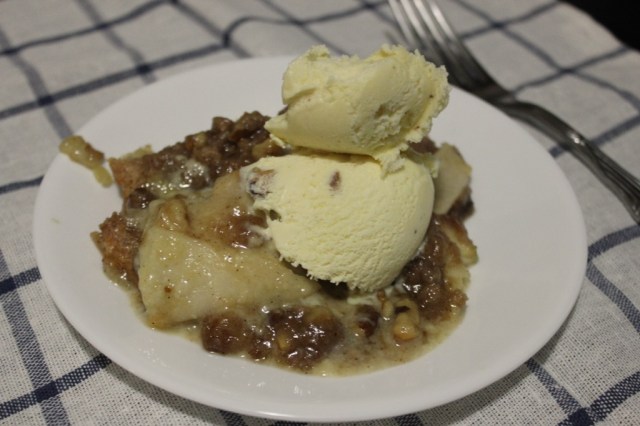 Ideally you should give the pie some time to set and cool down before you try to slice it. I’ve never been able to do this. I usually scoop my pie when it’s still the consistency of molten lava then smother it in a glob of ice cream on top. Works every time.