This is the week Ohio and West Virginia have tried to bring us way back to, oh, I don’t know, 1050 A.D., as Ali wrote about, but luckily Montana is moving out of the Dark Ages, at least in one small way. See, up until yesterday, Montana’s law books had a leftover from more homophobic times: a law criminalizing gay sex. In a speech made in the state capitol before the signing of the bill that would formally decriminalize gay sex, Democratic Governor Steve Bullock told a crowd eagerly awaiting the signing ceremony,

“I am not going to speak too long because frankly, the longer I talk, the longer this unconstitutional and embarrassing law continues to stay on our books.” 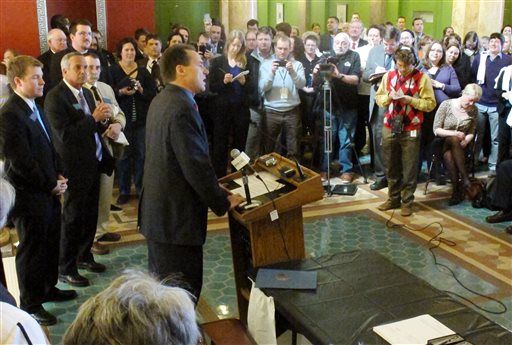 Even before now, the archaic law wasn’t enforceable. It was ruled unconstitutional by the Montana Supreme Court in 1997; and more recently is 2003, the landmark case, Lawrence v. Texas ruled persecuting sodomy between men (otherwise known as the law’s version of “gay sex”) unconstitutional. The events that would lead to the historic case started on a September night in 1998 when Lawrence was in his apartment getting drunk with two men, one of whom had a jealous boyfriend who called the police to lie, saying that Garner (his boyfriend) was waving around a gun. Next thing you know, the police busted into the apartment and freaked out seeing drunken men in their underwear (who weren’t even having sex) in an apartment supposedly decorated with James Dean porn. Garner and Lawrence were charged with sodomy, and gay-rights activists and lawyers packaged the situation as the plight of a loving gay couple persecuted for intimacy. It worked, and one night of drinking eventually led to the Supreme Court ruling that anti-sodomy laws were unconstitutional.

However, Montana’s lawmakers, apparently not moved enough by the plight of the drunk boyfriends and the 1997 court ruling, held on to the now useless law for memories of homophobic days gone by. Activists have been trying to get it erased from the books since 1997, they but faced opposition from lawmakers who denied the rulings of the Supreme Court and the outcome of Lawrence v. Texas, preferring to stand by their interpretations of the Bible. There are still Republican Representatives who feel that striking the ban from the law books in an affront to the Good Book. Representative Jerry Bennet, for example, is afraid yesterday’s events will cause negative “long-term ramifications” because you know, officially getting rid of an already useless law is probably going to tip the country over the edge.

“This isn’t over,” he warned. “We will see a continual push for recognition of unions… for health insurance. All kinds of things will come out of this.”

Unions! Health insurance! What atrocities! Happily, Bennet was in the minority: the decriminalization bill passed the House on a 65-35 vote and the Senate with 38-11. In both votes, some Republicans even joined minority Democrats to help pass the new legislation. Republican state Representative Duane Ankney said the law was an affront to his gay daughter:

“To say she is any less of a person, or she is a criminal for her lifestyle really upsets me.”

Even though it won’t affect the reality of day-to-day life for LGBT people in Montana, (finally!) erasing the outdated ban is a symbolic victory for gay rights. Jamee Greer, Montana’s Human Rights Network Organizer, says that the bill is the first explicit victory the LGBT community in Montana has won. Ever. Many are hopeful the bi-partisan cooperation means good things are to come because Greer explains that in the past Republicans have refused to stand with Democrats for fear of not being re-elected. Let’s hope Greer is right because LGBT people need a lot more than symbolic victories. Just this year, an effort to prohibit discrimination in housing and employment (you know, a job and a home, things that are kinda very important to lots of people, including gay people) was tabled. I’d rather have right to discrimination-free housing and employment than an already nullified law officially removed, but one step at a time, right? Here’s to hoping that more Republicans like Duane Ankney have gay children.