GAGA AND THE GODS: 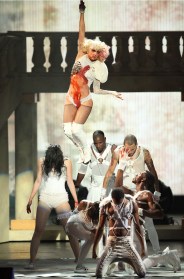 “Reverend Fred Phelps hates fags (not to mention Jews), and Lady Gaga loves everything gay. So somehow by the transitive property, it makes sense that the Kansas pastor would declare that God hates Gaga.” (@huffpo)

Westboro will be attending her concerts with their trademark placards “reading God Hates Lady Gaga to inform people that they will be going to hell too if they listen to her messages.” Okay Fred srsly, does this shit work? Like is anyone gonna wander up to the concert and be like, “You know, I was excited about the Fame Monster tour and I hear Kanye might make a special appearance, but your placard really caught my eye and made me think twice about riding the ol’ disco stick.  I’ll just hang out here with y’all instead. God hates fags, you say? Interesting point …”

BRITTANY MURPHY: There’s been a lot of speculation about Brittany Murphy’s relationship with her husband Simon Monjack but now we know one thing about what those two were up to: he’s been taking some incredible (and often eerie) photographs of her. They’re awesome, but also; she’s beautiful. Check it out: Simon Monjack Photography.

Brittany’s funeral will take place today, and her Dad is not going. Furthermore, Redbox, which owns thousands of DVD kiosks around the world, will remove the controversial promotional art for Murphy’s recent horror film ‘Deadline’ because the art features a pale Murphy peeking out of a bathtub like she was when she died. (@popeater)

NYE: What are you doing on New Year’s Eve? I KNOW YOU’RE GOING TO SNAPSHOT. Snapshot is holding a New Year’s Eve bash, Perfect Ten, this year at the Chelsea Brewing Company! Tickets are $20 beforehand and $30 at the door, from 10pm ’til 6 IN THE MORNING ’cause that’s how we do in New York City. (click the poster to enlarge)

GLEE: Matthew Morrison (aka: Mr. Schuester) comes out as hetero to Elle: “I grew up singing and dancing, so people have been calling me gay since fifth grade. I’ve heard everything you could possibly hear about it. But I do love gay people, so I’m not going to act like I was insulted or angry about it.” (@elle) Also, there are two hints about what Jane Lynch will be singing on Glee: 1. Gene Kelly and 2. Fred Astaire. (@ew)

JERSEY SHORE: Is Jersey Shore a hate crime? The MTV reality show “Jersey Shore,” which follows the exploits of self-proclaimed “Guidos” as they drink, mate and tan their way through a Seaside Heights summer, violates the spirit of the New Jersey’s hate crime laws, according to the New Jersey Italian American Legislative Caucus. (@nj.com)

MEGAN MULLALLY: Megan Mullally is returning to Broadway in the revival of Terrance McNally’s Lips Together, Teeth Apart. The play, which centers around a July 4 celebration filled with mishaps at a Fire Island beach house, will begin previews April 9. Sounds super gay! (@latimes)

SHERLOCK HOMO: Sherlock Holmes stars Robert Downey Jr. and Jude Law have long been telling the press they are infusing their version of the classic detective story with a hint of “homoeroticism,” saying their Holmes and Watson will have an “affectionate bromance.”(@popeater)

NURSE JACKIE: Everyone’s favorite gay male nurse on Nurse Jackie has been thrown in to the vortex. I, for one, find this devastating. #sigh (@ew)

PUNK: Argentine and Mexican Girls “challenge rock-and-roll prejudices against Latin dance music” with Queer Kumbia – “We realized it was more punk to play cumbia than to start another punk band.” (@reuters india)

LAW AND ORDER: Law & Order SVU Marathon this Sunday! And bitch magazine says it’s good for you not just ’cause Mariska is the most beautiful woman on the planet (I’m not being hyperbolic here) but because “The detectives on the show are aware of gender and how it may make people susceptible to certain crimes — but they don’t see the law in gendered terms.” – Why a Sex-Crimes Show is Surprisingly Female Friendly – Interesting bit about the show! (@bitch)

WHO ARE YOU?: What does your favorite magazine say about you? (@gawker) Or, if you’re more auditory, check out Flavorwire’s list for stereotyping people by their favorite indie band.

DOUBLE BEARDING: After a “romantic evening” of watching Avatar with the rest of the world, a report is saying that Kanye West and Amber Rose are madly in lurve and marriage plans are in the future. (@celebgossip)

AUTOSTRADDLE: We’ve had a lot of Autostraddle Interviews lately! So take a shot at Tila Tequila, Tegan & Sara’s BFFs An Horse and Sandra Bernhard! (@autostraddle)

GAGA: Lady Gaga will be on an episode of Bravo’s new show Launch My Line, where the aspiring designers will be trying to design outfits worthy of her look. (@people)

SEX AND THE CITY: