Boycotting is a practice older than America itself; even back when we were still a colony of Britain, we were refusing to buy things from people we disagreed with. You may have heard of the Boston Tea Party, in which colonists tried to send three shiploads of tea back to Britain in protest, and when they weren’t allowed to they threw it in the harbor instead. Even if that doesn’t ring a bell for you, you might think that it would at least mean something to THE TEA PARTY. But given the flak that queer activists have been catching for boycotting efforts, it’s apparent that the loyalty to the founding fathers’ mythology stops at their being unrepentantly upper-class, white, male, and privileged.

Earlier this month, Focus on the Family complained about gay activists who were upset about corporations’ (like Toms or Starbucks) ties with anti-gay organizations, claiming it was an example of “a growing trend of activists putting pressure on companies to be pro-gay.” Essentially, they claim that corporations like Target are being bullied by the queer community.

Now, the Family Research Council has gone on CBN News to discuss how gay activists “urge retailers to discriminate against customers who hold a traditional view on marriage.”

Joe My God puts it best:

When anti-gay Christianist hate groups call for nationwide boycotts of LGBT-friendly companies, that is a righteous use of the free market in order to preserve morality, marriage, family, and the American way. But when GAY groups use or threaten the use of a boycott, THAT is homofascist intimidation, intolerance, bullying, and an attempt to deny the freedom of speech.

+ There’s the 2004 “pro-family” boycott of Procter & Gamble by the American Family Association and Focus on the Family because of its support for “homosexual marriage.”

+ In 2005, Focus on the Family and the AFA boycotted Kraft Foods for its proposed sponsorship of the 2006 Gay Games.

+ In 2008, McDonald’s cut ties with the National Gay and Lesbian Chamber of Commerce after a five-month American Family Association boycott.

+ Just this month over 540,000 people have committed to boycott Home Depot because of its “support of homosexual activism,” again courtesy of the AFA.

+ And this year, many GOP groups and politicians (as well as Focus on the Family) boycotted the Conservative Political Action Conference because GOProud was cosponsoring it — aka making sure it happened.

So, it seems fair to say that referring to value-based boycotts as “discrimination” while your own community doing the exact same thing is “pro-family” is a little hypocritical.

Boycotting any organization or company is an option that’s always there for anyone; it’s a hugely important tool for social change in a democracy that often doesn’t represent the needs of many communities effectively. For example: in 1965, the Mexican and Filipino farmworkers of California were at an extreme disadvantage, and their employers were free to deny them basic rights and protections with no consequences. After negotiating, agitating, and even hunger strikes failed to convince employers that workers deserved basic rights like a 40-hour workweek, organizers Cesar Chavez and Dolores Huerta initiated a nationwide grape boycott and strike.  Supported by a fiercely devoted group of union members and sympathizers who put together “picket lines and marches, signed petitions, supported labor laws, lobbied elected officials, distributed educational flyers, produced documentaries, penned songs, performed plays, [and] held teach-ins,” the grape boycott finally succeeded after five long years and many lives lost, when workers won a union contract. 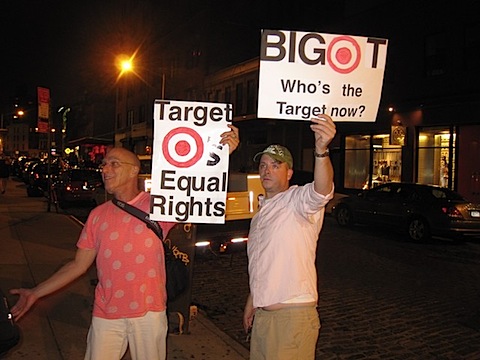 The story of Chavez and Huerta’s campaign may seem unrelated, but it’s not just important for labor history; it’s an important and inspiring lesson about how economic power can be harnessed by otherwise extremely marginalized groups when the primary power structure in place can’t or won’t meet their needs. When the queer community does successfully draw attention to an issue via a boycott, like we did with Target, or makes a major corporation like General Mills sit up and take notice, it’s an activist workaround to address the fact that our elected officials don’t advocate for us. It’s one of the most effective ways we have to do it for ourselves.  And that’s really why Focus on the Family and the Family Research Council are in a huff about it — it’s not because it’s discriminatory, it’s because it’s working.