The very last Harry Potter movie will be released nationwide this Friday at 12:01am. You guys, all I want to do is cry. I’ll be in good company though; Daniel Radcliffe told Larry King in an upcoming interview that he “wept like a child on the last day” of filming. Jesus, he even sounds British in print.

While it’s true that no movie will ever quite match up to the books, I’ll miss the midnight insanity that comes with every new installment. It’s not often that that kind of universal enthusiasm for something I honestly love comes around, and so I try to make the most of it. I’ll be attending the first showing (Well, not the first first, Havard students and staff will be treated to an early screening and fans in the UAE can catch it today) with my good friends Hoodie and Tissue Box. In the interest of storing up enough tears to adequately express myself on Thursday night, let’s take a look at the the recent celebrations.

From The Philosopher’s Stone to this week’s London and New York premieres we’ve come a long way. Looking through photos from the events, it’s hard not to notice how foxy everyone involved in the movies was and just how much J.K. Rowling looked like a rosebush in that dress. In New York, fans camped out–some for as long as 6 days–for a chance to catch a glimpse of the stars and other assorted weirdos on the red carpet. Camp Anawanna was rewarded with surprise wristbands to the screening and a visit from pizza delivery boy, Draco Malfoy. More on how much I love Tom Felton later. 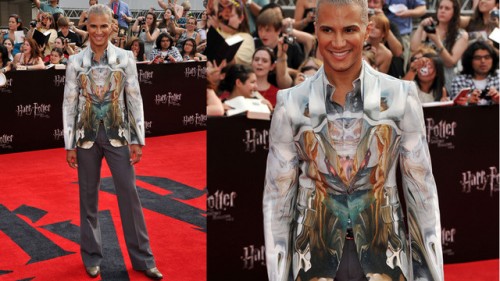 No word on whether Tyra made it to the permiere

This is a link to a Harry Potter corn maze.

The premiere was met with glowing reviews. Seriously, everybody fucking loves this movie. Even the Vatican. Remember when Christians hated HP? Once I made the mistake of buying Gryffindor fabric from Hobby Lobby and was treated to a 10 minute lecture from the woman cutting my fabric on exactly what made Harry Potter so evil. “Had she read the books?” I asked her. Oh no, she would never expose her eyes to something satanic. Luckily, lots of other Christians took chances with their eyeballs and discovered what Harry Potter was really about. Some even taught college courses about it.

Le sigh. The closest I ever got to a class about Harry Potter was renaming all the courses on my high school schedule (chemistry = potions, Spanish = ancient runes, etc.). Speaking of high school, let’s reminisce. Remember how the Quidditch scenes in the first movies were a slight step up from Gumby, animation-wise? Thanks to advances in technology, you can now play Harry Potter and the Deathly Hollows, Part 2 for kinect, which has been described thusly: “Unlike its predecessor, you really feel like you’re controlling children fighting in a war that they may not be ready for.” Sign me up.

We have now arrived at the “Child Stars: Where Are They Now?” portion of the article. Remember how cute they were? 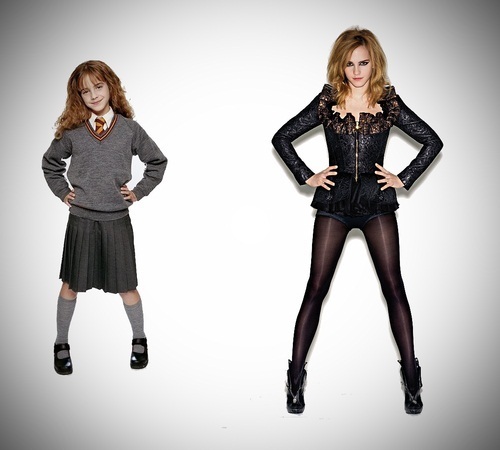 Bam. They still are. Besides being beautiful, Emma Watson is cute, has been drunk, is going to be in The Perks of Being a Wallflower, and is beautiful. Daniel Radcliffe is being responsible, picking good music for playlists, and singing on Broadway. JK is working on Pottermore and “sort of writing two things at the moment – one is for children and the other is not for children.” Bits of set of the movie are traveling around the world, generally inspiring excitement and raking in cash by the wheelbarrow.

Rupert Grint is busy being a really nice guy who just happens to own an ice cream truck. “‘I get a lot of people from the ginger community shaking my hand,’ he said. ‘In England, not so much in America, it’s not the coolest thing (being red-headed), really, and they get hassled.'” I wonder if M.I.A. would be interested in collaborating with him. Tom Felton is launching his rap career (which might be a joke?) a la Jimmy from Degrassi and chillin’ with his real-life shawty who played his wife in the movie.

For more Harry Potter parapharnelia, check out the New York Time’s resource page. And if you need something to help you stop bubblering on Friday morning, look no further than Wizard People, Dear Reader.