Feature image via The Guardian

“There’s blood on many hands tonight — those that incited violence on the street under the guise of protests, that tried to tear down what New York City police officers did every day,” the head of the Patrolmen’s Benevolent Association, Patrick Lynch, said after two NYPD police officers died at the hands of gunman Ismaaiyl Brinsley. For police forces across the United States, which exist as emblems of institutionalized violence and white supremacy, the blood of slain officers comes as a surprise. Police officers aren’t supposed to suffer; they are instead promised glory for fulfilling America’s agenda to exterminate and destroy. There truly is blood on many hands tonight and many nights past and future; but, for many of us people of color, we are born in bloodshed and will continue to shed blood for a country that depends on our death for its life.

Violence is a fact of life for far too many marginalized peoples, especially for queer and trans people of color. We speak around violence, like it’s a sob caught in the back of our throats. I want to examine the various manifestations and influences of violence specifically in communities of color. Social forms of violence aggressively prey on our communities, carrying out an orchestrated, intergenerational genocide. Violence also carries with it political impulses, from the violence we face from oppressive systems to the historical uses of violence in various movements. I very much believe that for many communities of color, violence is both a weapon against and a tool to empower us. I don’t want to speak around violence anymore. This is my attempt to overcome an inherited fear of acknowledging the socio-political brutalities our communities face, and to speak about violence.

Children are more likely than adults to experience and witness violence, placing the roots of our community’s violence in childhood. We like to imagine childhood as an age of innocence and honored humanity, but especially for children of marginalized populations, that innocence is denied to them from the onset of life. In 2011, National Surveys of Children’s Exposure to Violence (NatSCEV) interviewed a group of young people to measure the different types of violence that children experience. The survey determined that in 2011, nearly one-half (41%) of children were physically assaulted within the previous year, and more than half (55%) had been assaulted during their lifetime. The survey also found that children often experienced violence multiple times with 48% of children reporting more than one form of victimization in the past year.

The above statistics do not take into account how race, gender, and sexuality influence the violence that children of color experience, and that police brutality, drug related crimes, and systemic violence perpetuated by the healthcare system, education system, and economy disproportionately influence communities of color. (The NatSCEV study does include a portion about gender in a different excerpt.)

The degradation of the person of color begins psychologically, as children who witness or experience violence often demonstrate symptoms of repetitive traumatic dreams, cognitive confusion, pervasive pessimism, and a “sense of a foreshortened future” (Groves, Betsy McAlister. Children Who See Too Much). The degradation of the person of color begins cognitively, as neurological changes that can increase impulsive and violent behavior lead to “lower cognitive functioning, poor school performance, lack of conflict-resolution skills, limited problem-solving skills, pro-violence attitudes, belief in rigid gender stereotypes and male dominance” (Muscari, M. “How Does Exposure to Violence Affect Children?”).

We see violence not only in the crimson of blood spilled far too many times but also in the varying shades of brown on the skins of people of color. To be a person of color in the United States, and in the global narrative, is to be the shadow of violence. Our trauma manifests on a community level, to an extreme that self-perpetuates violence intergenerationally to keep us oppressed. The intergenerational cycle of violence begins as violence breeds trauma. Traumatized children become traumatized adults, and due to structural inequalities that forge barriers between people of color and adequate healthcare that may reduce the harm of said trauma, these traumatized adults are forced to carry the burden of their society-inflicted pain. Trying to overcome a capitalist system that economically disenfranchises people of color, housing inequalities that cage people of color in environmental disadvantaged areas, and a number of other societal hindrances, many of these adults will raise the next generation to the best of their abilities, but these children already inherit the trauma that precedes them. What institutions of white supremacy, like the police force, fail to understand is that if violence is our inheritance, it can also be our birthright. If we can engage in community-level healing to disrupt the power of trauma over our communities, we can turn violence on its head and use it as a tool for our liberation.

Violence as a Strategy 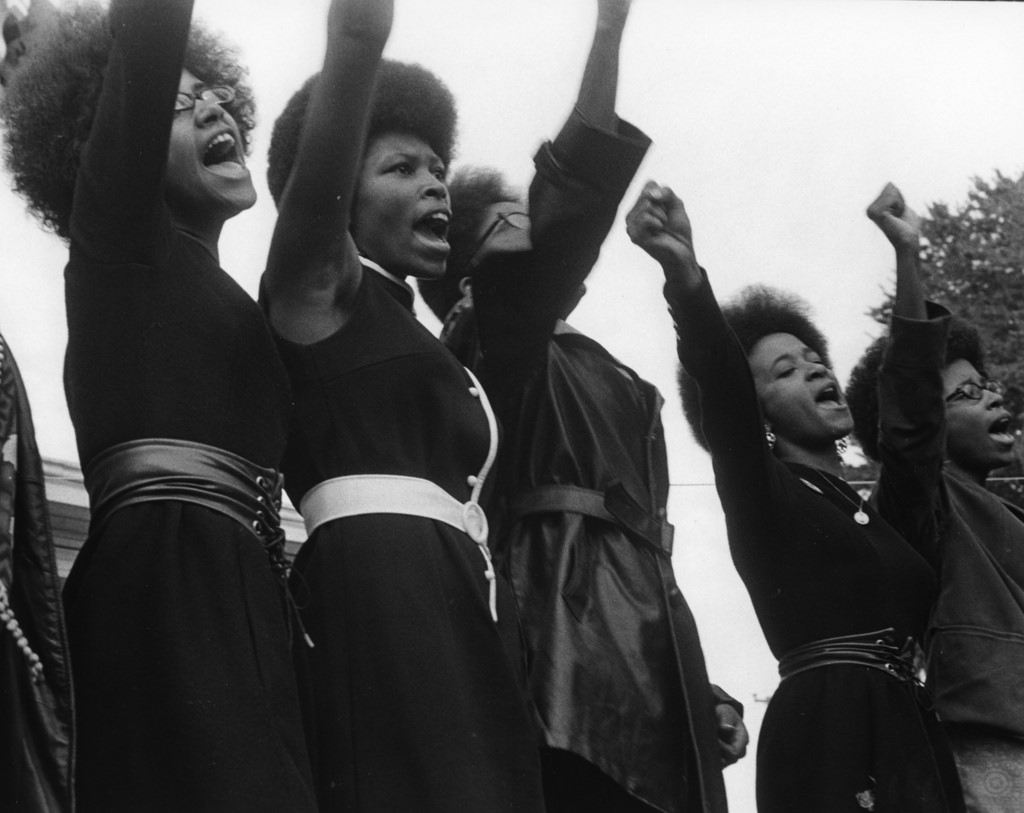 via Golden GatExpress
Women of the Black Panther Party

If I had a dime for every time mainstream media fed the public the most sanitized versions of liberation struggles, I would be able to pay off my student loans in one shot. Hetero-patriarchal white supremacist portrayals of marginalized peoples’ successful efforts for liberation as passive, coded through the language of “non-violence,” is an act of historical violence. It robs communities of their own agency and places the burden of justice on oppressed people’s ability to ask for their humanity just right instead of on the oppressor to recognize the everyone’s humanity. In late November, when a Ferguson grand jury acquitted Darren Wilson in the shooting death of teenage Michael Brown, one of the first things President Obama made sure to emphasize was that angry people of color should be peaceful. Asserting that he has “no sympathy at all for destroying your own communities,” President Obama pointed out:

“There are productive ways of responding and expressing those frustrations, and there are destructive ways of responding,” Obama said. “Burning buildings, torching cars, destroying property, putting people at risk — that’s destructive and there’s no excuse for it. Those are criminal acts. And people should be prosecuted if they engage in criminal acts.”

The rhetoric of peaceful protests that the faux progressive, white supremacist State promotes is a distortion. Peaceful protests, most eagerly invoked in reference to the Civil Rights Era of the 1960s, were a strategy, not a cure-all or a default method for liberation. In fact, even when Civil Rights leaders like Dr. Martin Luther King Jr., or Bayard Rustin championed nonviolence as a tactic, they were actively engaging with violence. The nonviolence of protesters in the 1960s only furthered their cause to the extent that the violence of white supremacists remained present.

Revolutionary organizations and individuals also used violence as a direct strategy in their work. From the Black Panther Party, to the American Indian Movement, to the Stonewall rioters, marginalized people make gains through “violent” means as well as nonviolent methods. The mainstream argument that violence will not achieve liberation is a mechanism for control that seeks to make marginalized people complicit in their own oppression. It is a plea for people of color, women, poor folks, queer people, trans people, disabled people, and anyone who happens to find themselves at the intersection of any or all of those identities to make their emancipation efforts as convenient and comfortable for the oppressor as possible. 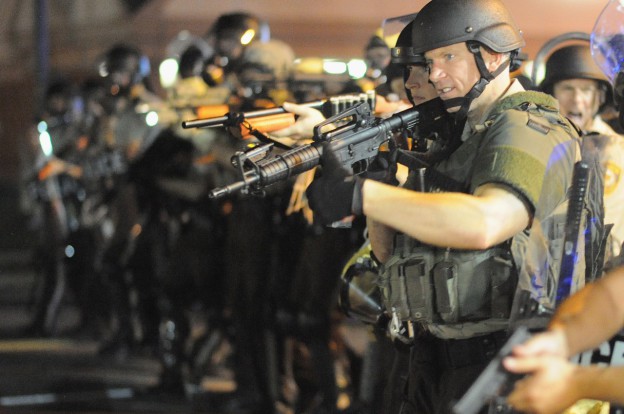 via Here And Now
Pictured above, nonviolent police officers kindly advocating against injustice

Assata Shakur wisely defended that “nobody in the world, nobody in history, has ever gotten their freedom by appealing to the moral sense of the people who were oppressing them.” A murderous State cannot tell us that we must protest “peacefully.” An appropriative State can’t instruct us not to destroy communities that we’ve never been allowed to fully own. In fact, revolutionary philosopher Frantz Fanon believed that only absolute violence could disrupt the white supremacist system of oppression because it undoes the violence created to keep the oppressed obedient and complacent.

This thought piece is not a call to set fire to everything within a 10 mile radius of your computer; however, it is an examination of violence in our queer communities of color, as well as in our white supremacist nation states. America doesn’t have a conscience, and every acquittal of racist cops who continue the genocide America has spent the last few centuries endorsing proves it. America can’t thrive off of violence and death and still define the moral high ground for liberation. So a murderous State can’t tell us queer folks of color, poor queers, disabled queers, and everyone in between that we must protest peacefully in order for us to get justice. Many of our ancestors were violently forced to build this nation, and it is our birthright to tear it down.

Violence features so prominently in many of our communities, and yet it exists as the unacknowledged specter in queer spaces, and particularly in spaces for queer people of color. In a self-preservative gesture, I think we speak around violence in an effort to have some reprieve from it. While it is important for us to forge spaces in our communities that are explicitly nonviolent to give us a chance for collective healing, we must speak loudly about the violences we face and as a result take ownership of them. We must recognize that the majority of us are covered in someone’s blood, if not our own. When we own the violence we face, we can begin to break the shackles of trauma that keeps our communities disenfranchised and oppressed. We can fortify our communities with love and with hope. Moreover, if we own our violence, instead of fearing it because we see how violence has wrecked our families, neighborhoods, and communities, we can use violence as a tool for liberation, when it is necessary.

We are violence (though not necessarily violent) by nature of our marginalization, but we are also so powerful and so empowered. With every “riot” or protest, I see my fellow people of color, QPOC, and even allies breaking chains of oppression. Violence may have created the state of our world, but we have the right to choose and define peace for ourselves. And the peace I speak of, the peace I dream of is not the State’s model for absolute submission, but our aspiration for liberation.