The Supreme Court has ruled in favor of Wal-Mart in what was going to be the largest class action suit of all time, brought on by up to 1.5 million women against the corporation, the country’s largest employer, for discrimination.

A 5-4 vote determined that the suit could not go forward because the plaintiffs were unable to show that Wal-Mart had a common, chain-wide policy of discriminating against women.
+

Because individual store managers were the ones responsible for pay levels and promotions, Wal-Mart said, it wasn’t their overall fault. (It was just the individual fault of the bajillion employees who carried out sex discrimination locally in their own little area!)

This is a big “victory for Wal-Mart,” a company really in need of no additional victories, but also may help shield larger employers from similar claims in the future on anything claiming race/gender bias. From The Los Angeles Times:

Had civil rights lawyers succeeded in the case, they had hoped to bring other suits against large employers who allegedly relegate women or minorities to lower-paying jobs.

“In a company of Wal-Mart’s size and geographical scope, it is quite unbelievable that all managers would exercise their discretion in a common way without some common direction,” said Justice Antonin Scalia. Because class actions are suitable for resolving disputes that turn on a common issue, this lawsuit cannot go forward, Scalia said.

While the court’s liberals disagreed on this point, they agreed with Scalia that the class-action claim was flawed because it sought individual awards of back pay for the women. All nine justices said this class-action suit could not seek monetary damages for the women workers.

Scalia’s opinion strongly suggested that such claims cannot proceed as a single class-action suit unless the plaintiffs can point to a company policy of discriminating against certain employees.

[Plaintiffs] allege that the company “[r]eli[es] on gender stereotypes in making employment decisions such as … promotion[s] [and] pay.” Wal-Mart permits those prejudices to infect personnel decisions, the plaintiffs contend, by leaving pay and promotions in the hands of “a nearly all male managerial workforce” using “arbitrary and subjective criteria.” Further alleged barriers to the advancement of female employees include the company’s requirement, “as a condition of promotion to management jobs, that employees be willing to relocate.” Absent instruction otherwise, there is a risk that managers will act on the familiar assumption that women, because of their services to husband and children, are less mobile than men.

Women fill 70 percent of the hourly jobs in the retailer’s stores but make up only “33 percent of management employees.” “[T]he higher one looks in the organization the lower the percentage of women.” The plaintiffs’ “largely uncontested descriptive statistics” also show that women working in the company’s stores “are paid less than men in every region” and “that the salary gap widens over time even for men and women hired into the same jobs at the same time.”

Along with Ginsburg, Sonia Sotomayor, Elena Kagan and Stephen G. Breyer did think the suit should have been allowed to proceed even if it didn’t lead to monetary values. So basically all the women thought it should go forward and the men did not. You can read more from both sides at Daily Kos.

Although this is a big win for Wal-Mart, it doesn’t take a stand on whether or not Wal-Mart is guilty of gender discrimination, only that these women can’t pursue a class-action suit together. 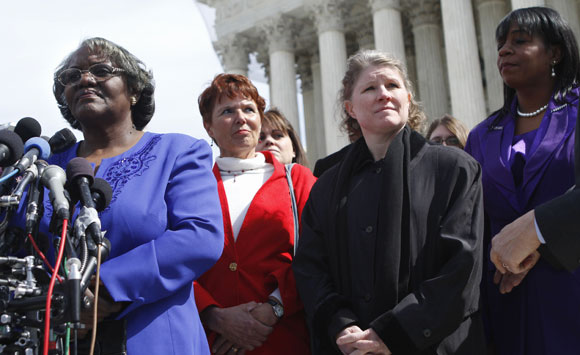