One of my favorite things about the Amazon Original Series Transparent is it’s commitment to not only telling the story of a trans character, but also to providing opportunities for real-life trans people. Showrunner Jill Solloway has, from the very beginning, been insistent on including as many trans people in the cast and crew as she can, including people like co-producers Zackary Drucker and Rhys Ernst. Drucker and Ernst, in turn, have used their positions and the new connections that they’ve been able to make while working on the show in order to bring along as many of their fellow trans people as they can.

This goal of outreaching and uplifting transgender community support is exemplified wonderfully in Drucker and Ernst’s online docuseries This is Me. This series of five short videos highlights different moments and experiences in the lives of trans people that Drucker and Ernst found right in their own back yard. “They were all people who are in the community in LA,” she told me, “a lot of them are performers or actors who had a grip on their own narratives and how to present them, we were kind of documenting their stories in an organic way.” According to Ernst, the series was inspired by the sensibilities of Transparent itself, and especially “by the Trans Bechdel Test scene that happens in Transparent where Shea and Devina and Maura are having a conversation that’s just about their friendship… that was the jumping off point.” 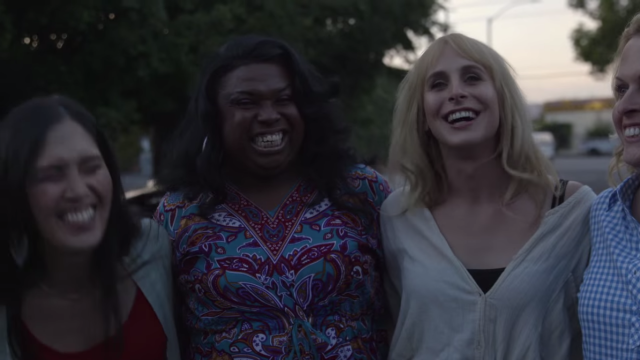 From the This is Me short “And My Sisters.”

Ernst also said that the behind-the-scenes of the This is Me is also directly inspired by Transparent’s mission of hiring trans people. He’s especially proud of how many trans people they were able to get involved on the project.

“We’ve kind of always had this conversation of ‘what if we went deeper with the trans issues that were brought up?’ It would be really cool to have an opportunity to make something that spoke to those things directly. Also, Jill really wanted to enable some of the trans crew people who were coming up and help along our careers. She wants to foster trans talent in the industry as much as possible. So, she executive produced this series that I directed and Zackary was one of the producers and Esti (Giordani) was a producer, so there was a bunch of trans and gender nonconforming people behind it, as well as our crew — we had like a trans sound mixer. We tried to hire as many trans people as humanly possible, and also gender non-conforming and queer.”

Drucker agrees. She told me that “the thing about LA is it is centered around the creative economy. For so long it excluded trans people. So to witness this moment in history when trans people are starting to be included and authoring our own stories is really remarkable.”

That’s one of the best things about This is Me — it’s creating a whole class of trans people in the film and tv industries who now have experience, contacts and an Emmy-nominated project on their resumes. When one of the most common excuses for not including trans people in TV shows and movies about trans characters is that there just aren’t any trans actors or trans writers, or just trans people in the industry at all, showing that there are all of these skilled creative people will hopefully lead to better representation.

As for the shorts themselves, they range from being funny, to informative, to beautifully touching. “And My Sisters,” starring Drucker, Van Barnes and Miss Barbie-Q, shows the three women bonding and talking about the importance of having other trans women’s backs and supporting each other. It’s able to create a very nice balance between showing a pretty fun and funny conversation between friends and taking a very frank look at the realities of how dangerous it can be for trans women to just go walking on the street. Other videos show trans people talking about coming out while living in India and Sri Lanka and how impractical, and scary, it can be to use public bathrooms when you’re trans.

Probably my two favorite videos are “Right this Way” and “Generations.” “Right this Way” features two genderqueer poeple, Mel Shimkovitz, an actor who played Ali’s bat mitzvah caterer in Transparent and Petey Gibson, talking about being misgendered in public, especially when you don’t identify with the gender binary. After being misgendered when they’re eating lunch, they have a pretty charming conversation about some gender-neutral options to use instead of “ladies” or “gentlemen.” In “Generations,” we see two trans people, Valerie Spencer and Lily Rubenstein, two trans women who were born in different eras, who are able to find common ground in the decades that separate their ages. Their conversation has some really beautiful moments. The series reaches it’s emotional high point when Spencer tells Rubenstein that when she sees her it makes her happy because “all that stuff that we went through, it was worth it, because now, you get to breathe.”

These shorts do a great job of showing some parts of the trans experience that Transparent isn’t able to touch on, and it’s able to do so in a really authentic way because it’s trans people who are behind the project. Where Transparent succeeds in telling a trans story that’s largely focused on how cis people relate to and see trans people, This is Me goes one step further and shows trans people talking to other trans people about their lives and experiences.  “It was awesome to dig deeper into that kind of stuff,” Ernst said, “I feel like we were able to cover a pretty wide spectrum of topics, and of course we would love to do many more. It was really gratifying to be able to do that.”

You can watch the entire series on wifey.tv.