Welcome back to your bi-weekly round up of All The Queer TV. It’s going to be a busy week; let’s jump right in! 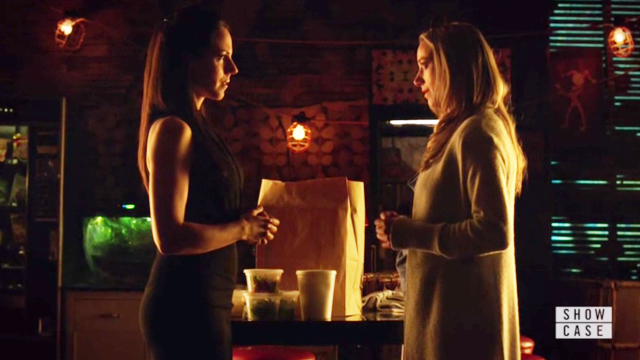 I do not eat too much pizza! The Ninja Turtles eat way more pizza than me!

I confess I have no idea what is happening on Lost Girl this final half-season, y’all. Lauren infused herself with the Rogue-style ability to siphon off super powers from the fae, and it lead to some mighty fine sex between Bo and full-chi Dr. Lewis. Of course that wasn’t going to last, though, and I don’t just mean the mighty fine sex. This week, Bo realizes that the more Lauren borrows her chi, the more neurological damage it does to her noggin. She can’t remember the simplest stuff, like that they ordered takeout and that her sunglasses are on her head. So guess what happens? They break up — AGAIN. Because being with Bo makes Lauren do reckless things like try to be immortal and so she decides they should not be together anymore.

Lauren already knew loving Bo made her foolhardy; this is not new information! And it doesn’t matter if she’s married to Bo or just pining after her and stalking her on Facebook (Faebook?) from a hundred miles away, she’s ALWAYS going to make dangerous, brash decisions because she’s always going to love Bo and that’s just the world they live in! Literal Zeus is on the loose, okay? Hades is building an army to punch a hole in the sun!

Bo ends up crying into a beer with Dyson, who also is crying into a beer because his werewolf heart is broken, but don’t worry, they don’t bone or anything. Bo goes home instead and bones Tamsin. Nope, just kidding, it is Hades disguised as Bo raping Tamsin.

Dammit, Lost Girl! I just wanted to see Bo and Lauren ride off into the sunset together and have a couple of laughs along the way these last few episodes. Is that too much to ask?! You were once the golden purveyor of Good Things! 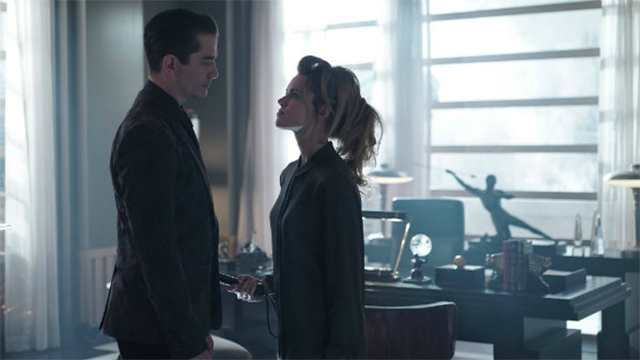 The Joker can’t be a ginger, I’m sorry, it’ll undo all of JK Rowling’s good work.

When How to Get Away With Murder revealed that Annalise is bisexual last Thursday night, right after a poignant and soul-singing Very Special Lesbian Episode of Grey’s Anatomy, one of my happiest thoughts was: The day is coming when no one I love with be forced to watch Gotham anymore!

The show has now written off Rene Montoya and killed off Detective Essen, proving once and for all that that the creative team never planned to use her as more than a token black character. They even used her death as a fridging point for both Jim Gordon and Bruce Wayne. And while Gotham is certainly giving Barbara Kean more to work with in the first two episodes of this season — and also potentially turning her into Harley Quinn — her characterization is still flimsy and her motivation is incomprehensible. But here’s the thing: She’s going to make out with Tabitha/Tigress at some point this season, and so we’re all still hanging on.

I am debating writing a standalone piece about this show and abandoning it as a relic of a time when you could string along queer female viewers with the promise of two girls kissing, even if that kissing was filmed for the male gaze on a TV show that repeatedly showed it was only interested in pandering to its straight white male audience. 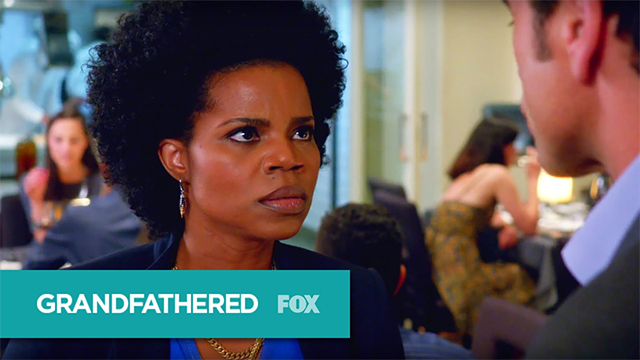 You said the Olsen twins were going to visit the set. Where are they?!

For three glorious years, Fox’s Tuesday night comedy block featured New Girl and The Mindy Project, two female-fronted comedies that employed female showrunners. Tonight, a new era begins. With New Girl in the bullpen until 2016, Fox is rolling out Grandfathered and The Grinder, both of which tell the stories of womanizing 50-something white guys trying to navigate the world while being as handsome and wealthy as cartoon astronauts. Grandfathered stars John Stamos, The Grinder stars Rob Lowe.

The thing that gives Grandfathered the edge is that it also stars Kelly Jenrette as Annelise, the manager of the restaurant Stamos’ owns. The joke is that the person assisting Stamos’ character has to be a lesbian, or otherwise she’ll sleep with him and he’ll dick her over and his business will be ruined.

I’ll have a full report next week. (In the meantime, The Mindy Project is navigating maternity leave in its new season on Hulu.) 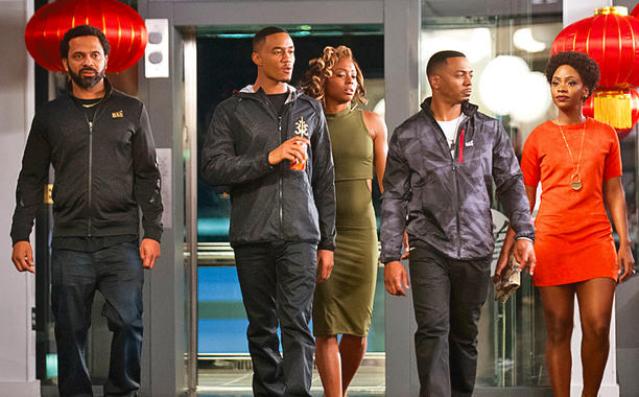 It’s been an M-Chuck-heavy half-season of Survivor’s Remorse, so she didn’t have much to do in this week’s episode. Instead the focus was on Cam and his mom both hooking up with people who have business ties with Cam and regretting it almost immediately. M-Chuck did get the best line of the episode, though: “Who the fuck is Audrey Hepburn?”

You’ll probably be happy to hear that Vox loves this show as much as we do. 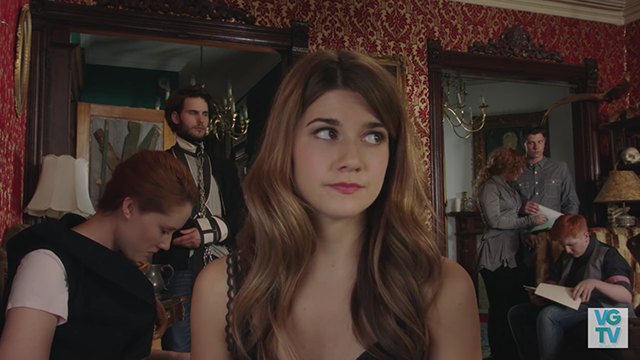 Danny probably wants to have more guilt babies than even Peeta.

Good news everybody, Carmilla finally comes back this week. I was really worried. Sure, it would’ve been strange if, after she threatened to kill everyone, she waltzed into the apartment talking about, “I’m back! I’m one of the lead characters!” But it has been almost two whole weeks.

In episode 33, the gang reminds us that Vordenberg has real power because he is board chairman. But maybe his power literally comes from the board charter, and the original charter is his horcrux. Theo and Mel interrupt via video chat to tell the gang they want to help free Vordenberg’s prisoners from the catacombs. I’m a little bored by this part because Carmilla isn’t back yet, and I just know Laura agrees because she keeps staring wistfully past the camera and ignoring Danny’s overtures about dying for the cause and for the right person.

Laura makes one last plea to Carmilla to help by broadcasting on the Ethereal-Net (LOL). She says she was wrong to be righteous and she’s sorry and Carmilla can hate her for as long as she lives, but they need her help anyway. 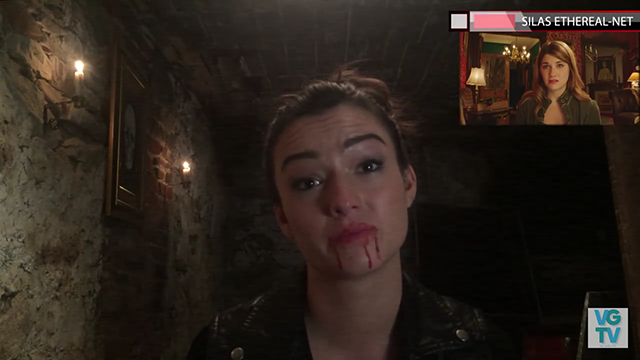 Just eatin’ spaghettiOs. How about you?

Carmilla video-calls and Laura’s epic State of the Union address is replaced with “Hey! How are you? You look great” and I have never related to Laura so much in my life. Carmilla cannot believe that Laura is still asking her to be a hero after she just mauled a ton of people.

Then Laura says the most romantic/strangest thing to a girl who has blood all over her face: “Maybe in this story, you’re my hero and I’m your hero.” And it melts my heart because I am not a Slytherin. Carmilla tells Laura that evil sometimes wins in the real world and saving your friends gets you killed, Cupcake. Then she hangs up.

Laura doesn’t know how to process this: she thought her awesome monologue would totally work. Laura leaves the room to help Danny, just as Carmilla calls back and agrees to help. Perry does the thing where her voice gets low and creepy and she tells Carm that Laura doesn’t want to talk, and hangs up.

Next week somebody, for God’s sake, accuse Perry of something! Only two episodes left!

+ Faking It Episode 215 Recap: Raise Your Hand If You’ve Been Outed By Shane Harvey
This week on “Faking It” everybody goes to detention together and is forced to tell each other the truth about stuff or else die of boredom!

I’ll be taking a few days off later this week to show my grandmother around New York (she’s meeting my girlfriend for the first time!), but will be back next Tuesday with a new Boob(s On Your) Tube.