What’s going on in Chile is this: Chilean students are at war with their government. In a nation that has the world’s largest wealth inequality gap and a student debt rate to match, students are rising up against the administration of billionaire president Sebastian Piñera to demand free and fair education.

Chile has a number of admirable credentials with regards to its educational system. It’s one of the most rapidly expanding in Latin America. The university population has exploded in the last 20 years from about 200,000 to 1 million. The generation that is participating in higher education today is higher than it’s ever been, with 70% of students being the first in their families to be enrolled in college. But the expansion has been far too rapid with far too little support from the federal government, which today is viewing education as less of a tool and more of a commodity. 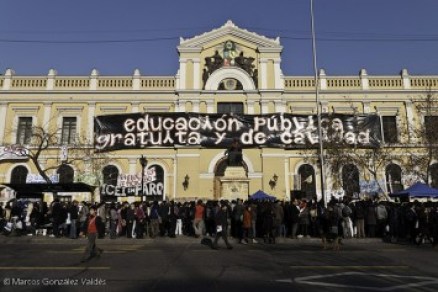 "Public Education: Free and of Quality." Courtesy of Education International

The booming student population since the country’s transition to democracy would normally be regarded as an overwhelmingly positive sign of a stable and thriving population, except for the fact that there has been little change made to accommodate the changing socioeconomic landscape of the student population. While the end of the dictatorial Pinochet era birthed huge economic and democratic growth, it also failed to recognize the tools that would be essential for a sustainable future in Chile. Most universities are private, and no new public universities have been built.

The students, led by Camila Vallejo, have created a litany of demands, but most importantly, they feel that the government must put an end to for-profit education and put their support behind public schools. Currently, public institutions are financed largely through tuition, which not only severely limits who is able to attend them, but also the possibilities of expansion. Not to mention that such funding policy negates the point of a public education anyway. Faced with such circumstances, most students are forced to take out loans with an expected return of 6.4%, and with the monthly minimum wage set at $385 – $100 less than the average monthly college tuition – it’s little wonder that there is unsupressable outrage. 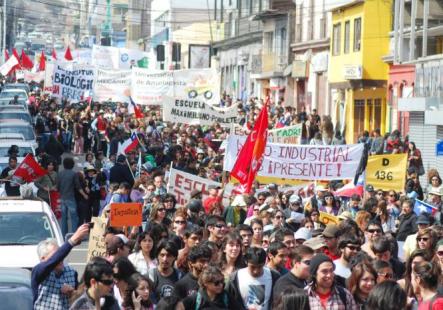 Protests began in May of this year and have been occurring since, growing each time and continuously rebuffing proposals from the government. Using both violent and non-violent tactics – first occupying school building and campuses – Chilean students were able to attract the attention of the government, which has agreed to some compromises but has also insisted on maintaining the legality of profiteering in education.”We all want education, healthcare, and many things for free, but I want to remind them that nothing is free in this life. Someone has to pay,” said Piñera in August during a speech he gave while signing a new education bill, which the students are currently demanding be put on hold.

High school and college students are joined in this protest by professors, laborers, and the majority of the population, 82% of whom supported their message at its peak (the number is currently at 67%), and only 26% of whom support President Piñera.

One of the more notable aspects of this movement is its leader, Vallejo, the president of the University of Chile’s student union, and only the second female president there’s ever been. Charismatic, capable, tirelessly dedicated, and self-aware, Vallejo knows her power, and knows that it is the power of the students. She knows she’s young, but sees that not as an obstacle but rather a tool for envisioning change. The media won’t stop telling her she’s beautiful, and she takes every bit of that attention as an opportunity to teach. A woman as a leader is a revolution in itself, and it speaks volumes about the kind of change that Chile is ready for. 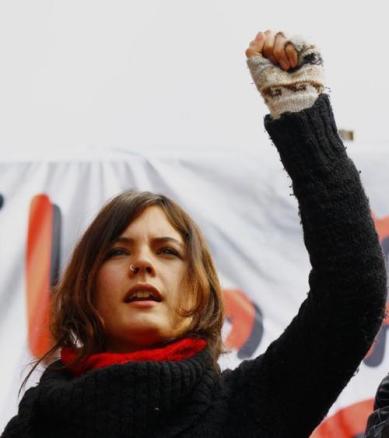 ”We do not want to improve the actual system; we want a profound change – to stop seeing education as a consumer good, to see education as a right where the state provides a guarantee.”

This is not a story about a singular stand against unfair education policies. This is not a story about one leader. This is not a story about an isolated uprising in a distant country. This is a story about systematic injustice that is not only making the present difficult but the future unimaginable, and it’s a story about us, too. The rate of income inequality in the US is fourth in the world. Students in Chile graduate with an average of $40,000 worth of debt to the public school system, and the United States isn’t doing much better. As the debt rates grow greater, the rewards become more distant. A degree is no longer a guarantee (though it will almost certainly guarantee you go into debt), and a job no longer implies a future. More likely than not, you’re going to spend a lot of time in your life helping someone else get rich. And that’s what the future looks like right now.

Education is hard because it’s an investment. And an investment has implications and makes assumptions about the future. And in a country that goes to war and foots future generations the bill and that goes into debt on our generation’s social security dollars, it’s hard to imagine putting an investment in the future. And for the people in this country who are either jobless or overworked, it’s hard to find time or resources to organize. The system of rewards that made education worth it to begin with is still in place, but its foundation is unstable. A job doesn’t mean what it used to, and so neither does an education. And with many public university systems steadily raising tuition and lowering financial aid, individualized frustration has the potential to turn into large-scale dissent in the United States as well. 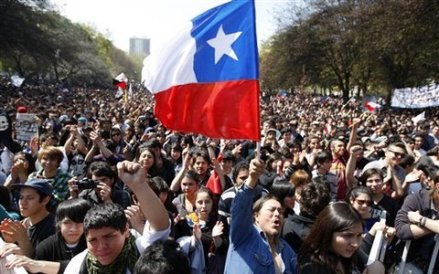 Students last marched on Thursday, Sept. 22, turning out 180,000 protesters in Santiago and thousands more in other major cities. Are those numbers big enough that they’re impossible to ignore? And if Chile’s students succeed in convicting its government of failing them, what does that mean for other nations with a similar problem? Maybe it’s true what Piñera says, and someone needs to pay, but if these students have anything to do with it, it’s going to be the people with the money and the power.